The Hall family achieved a total clearance of 70 rams, averaging $1411. 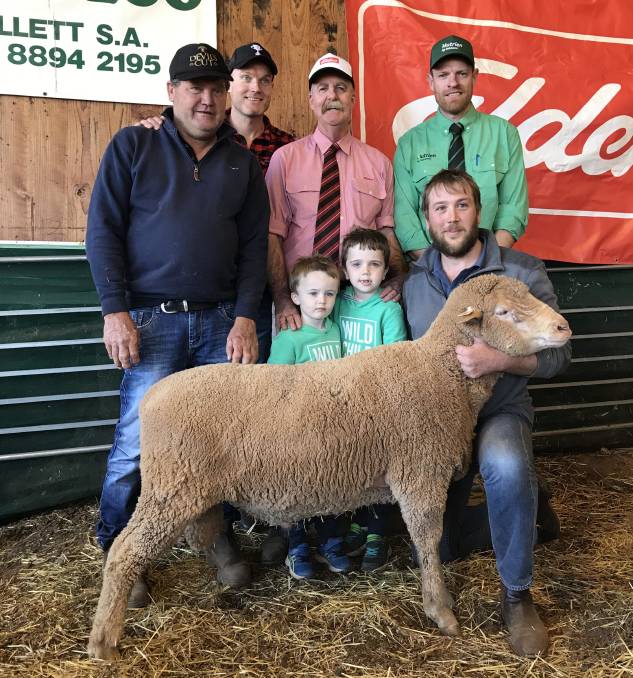 But it was regular clients, the Shoenberg family of Kilderry Park at Marrabel, who took home the sale's top price ram.

The $4000 top price was paid at lot 6 for a ram with strong Australian Sheep Breeding Values for both meat and fleece.

Nick Shoenberg said he was happy with the Ulooloo Dohne rams, as they give him the best of both worlds in terms of wool and meat.

"The top price ram was high in the index with good eye muscle and fleece weight, and it was a big ram with plenty of frame and weighed well," he said.

It has a post-weaning weight of 6 and a PW fat measurement of 0.4, putting it in the top 20 per cent of the breed for those traits, and a PW eye muscle depth of 1.4, which is in the top 10pc.

The ram had a yearling fibre diameter of -0.7 and yearling co-efficient of variation of -1.6, with its Dohne Merino Index also in the top 10pc of the breed, at 170.1.

Overall, the Hall family offered an extra 10 rams this year, and still achieved a total clearance of 70 lots, averaging $1411.

Selling for $2000 was lot 2 was a charity ram, with all proceeds going to the Kerslake Foundation.

The locally-founded charity raises money for melanoma research and support for those suffering with cancer.

GL&B Hayes, Kybunga, bought the charity lot, along with two other rams.

Those rams will be used to help rebuild The Bin-Bin flock, after two-thirds of the property, including the homestead and 500 ewes, was lost in the summer bushfires in December.

Ulooloo principal Greg Hall was "very pleased" with the outcome of this year's sale.

"The meat qualities of the Dohne Merino breed were highlighted at this year's sale, being the main profit drivers in the current selling climate," he said.

The sale was conducted by Elders and Nutrien Ag Solutions, with Tom Penna of Elders Stud Stock holding the gavel.