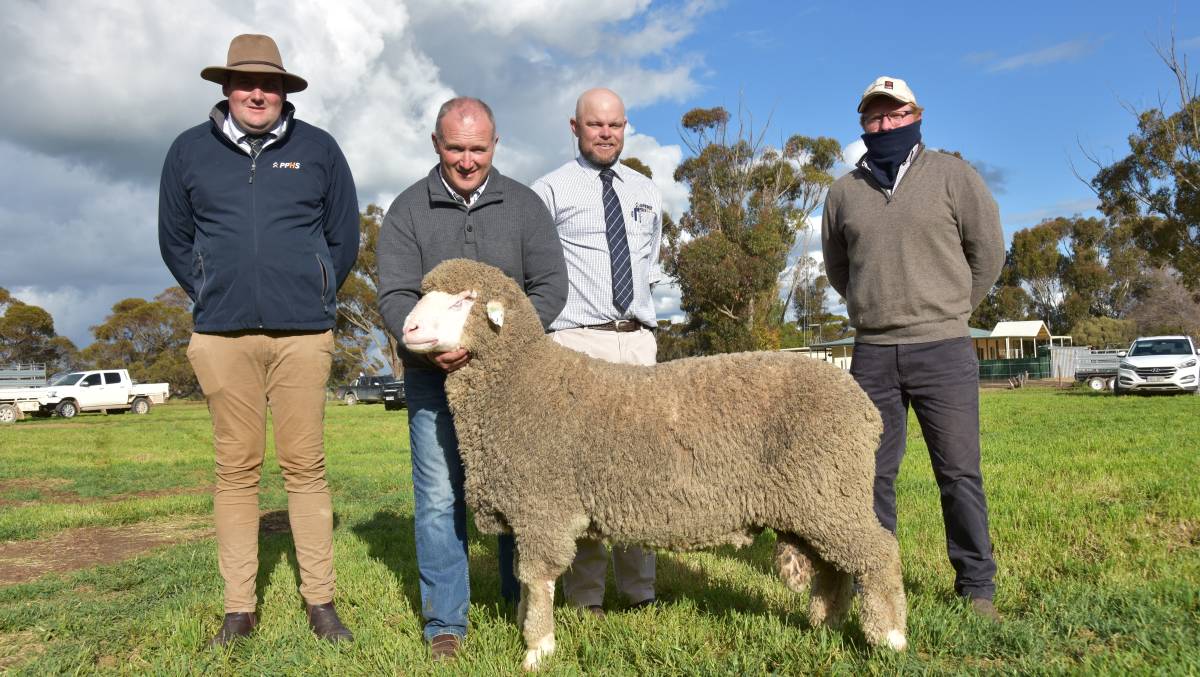 Lot 1 caught the eye of many at the sale, but it was classer Dale Bruns operating on behalf of Boorana Merinos, Woorndoo, Vic, who put in the winning bid at $20,000.

This was easily the highest price of the sale and also the most paid for a SA ram at auction so far this year.

The 19.3 micron ram, GP1345, like many in the catalogue was born a twin and had a greasy fleece weight percentage 26 per cent above the average of the stud's 2019 drop rams.

"He has a wonderful surface, skin that is loose, staple length and soft as butter with beautiful purity in his head," he said.

The fast paced bidding continued for two hours ensuring a full clearance of 163 rams offered by stud principals Peter and Marianne Wallis and more than $850 lift in average to $2960.

The 18.9M ram was sired by Moorundie NE73 a ram which has produced many top end rams for Glenlea Park since being bought for $30,000 in partnership with Boorana Merinos.

Plenty of bids came from AuctionsPlus with 29 rams knocked down to five different buyers including another GP881 son at lot 4 for $7000 to WA.

Mr Wallis said the sale result was "beyond words".

'We had a heap of pre-sale enquiry, especially through AuctionsPlus, but a lot of people hadn't used AuctionsPlus before and we didn't know if they would bid on it," he said.

"Some of our clients may have missed out on filling their orders but the way we have progressed over the years we have 130 grade rams in the paddock to fill these orders."

Mr Wallis said there had been many individual highlights in the past couple of years for the stud but he derived the greatest pleasure from the brand that Glenlea Park had built.

"The past few years I have seen our brand has added value to our clients," he said.

"There was tremendous support on Auctions Plus from Western Districts of Vic, WA, some stud interest and that was very very helpful to the clearance and the average of the sale, along with some local support in the Mallee and a couple of new guys that rolled in and bought volumes of rams," he said.

"All those factors made it an excellent sale."

He said the Wallises were rewarded for the quality of their offering.

"You don't sell a ram for $100,000 without knowing what you are doing and it has created a lot of attention and just attention but there is depth in breeding in these rams that goes back years," he said.

The sale was conducted by Pinkerton Palm Hamlyn & Steen and Spence Dix & Co.