A $32,000 purchase at Collinsville stud's 2016 on-property sale is still paying dividends for Rices Creek stud which set a new $10,000 record price at its Tintinara sale on Thursday with a grandson of the Imperial 20 ram. 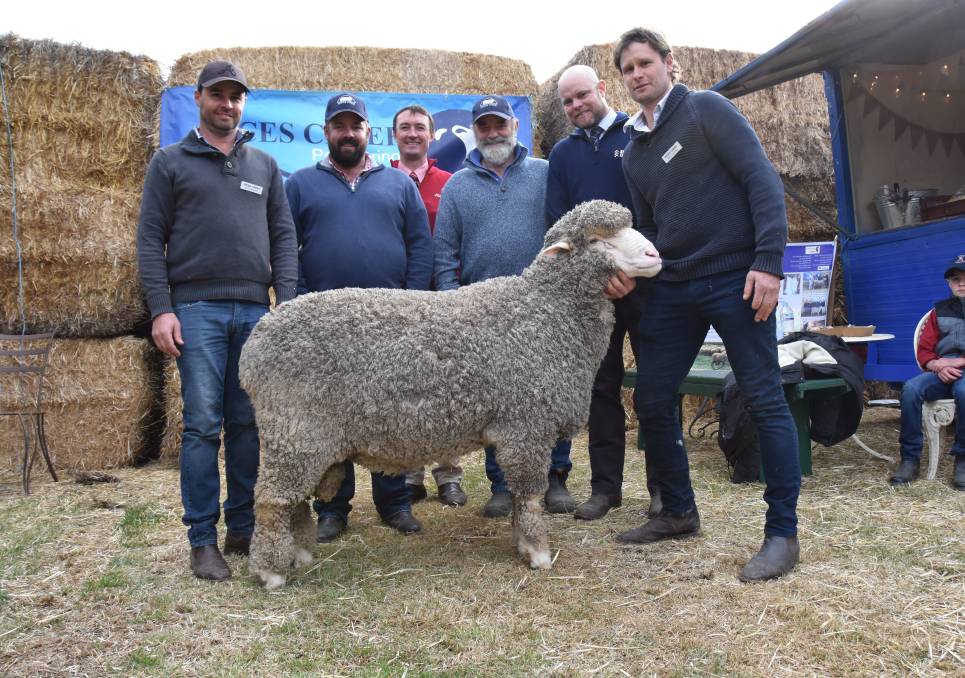 A $32,000 purchase at Collinsville stud's 2016 on-property sale is still paying dividends for Rices Creek stud which set a new $10,000 record price at its Tintinara sale on Thursday with a grandson of the Imperial 20 ram.

Garry Murdoch, North Cowie stud, Warooka, was among many who had admired the Vandeleur family's sale topper when he saw it at the recent South East Merino Field Day and made the trip south with his son Joe to the sale.

The Murdochs put in the winning bid for the 125 kilogram stand-out ram which had a very even wool type and was nearly fault free.

The 21.2 micron ram's other wool tests included a standard deviation of 3.3, coefficient of variation of 15.6 per cent and comfort factor of 99.4pc.

"It is a very well put together sheep, a really balanced sheep with well nourished, rich wool and a good really strong head we were looking for," Garry said.

"The Imperial line has bred really well at Rices Creek which gives us confidence in how this ram will breed for us," Joe added.

Although the average was back $162 on last year the Vandeleur family sold more rams, with 91 of 96 finding homes from the Eyre Peninsula to western Vic.

Prosser Family Holdings, Tintinara, who were the underbidder on lot 3 bought the following lot for $7000- the second highest price of the sale.

Paul and Debbie Doering, Walmona Pastoral Co, Truro, who have been clients of the Vandeleur family for more than 60 years led the volume buying list.

They secured 13 rams for a $1838 average and said the Rices Creek bloodlines are heavy cutters with great fertility.

David Hurst, Lake Hawdon, Robe, with the help of advisor and former Landmark stud stock manager Malcolm Scroop won many of the top end bidding duels to put together seven rams to $5500, averaging $4479.

Despite the SA-Vic border closure preventing Vic buyers being at the sale in person they were still active.

Stud principal Mark Vandeleur said they had been unsure how the sale would go with the "way the world is at the moment" and significant drop in wool prices, but they were "ecstatic" with the result.

"Everyone was able to buy rams in their budgets," he said.

"People chased the good ones but the middle run and some of the others were a bit cheaper than the last couple of years."

Mr Schreiber praised the consistency of the offering and said prices emulated this with plenty of biding well into the latter part of the catalogue, including lot 91 which made nearly $3000.

"We have noticed here more and more guys hitting rams at the top end, the competition on the top 20 per cent was just huge," he said.

"Buyers were looking for good wools but also mindful of getting good bodies.

"It is hard to get that right but the Vandeleurs have made that effort into getting some deeper bodies and bold crimping wools."

Rices Creek will offer another 130 rams at its Saddleworth sale on Tuesday, September 1 and has two Imperial 20 sons for the Adelaide Merino ram sale on Friday, September 11.