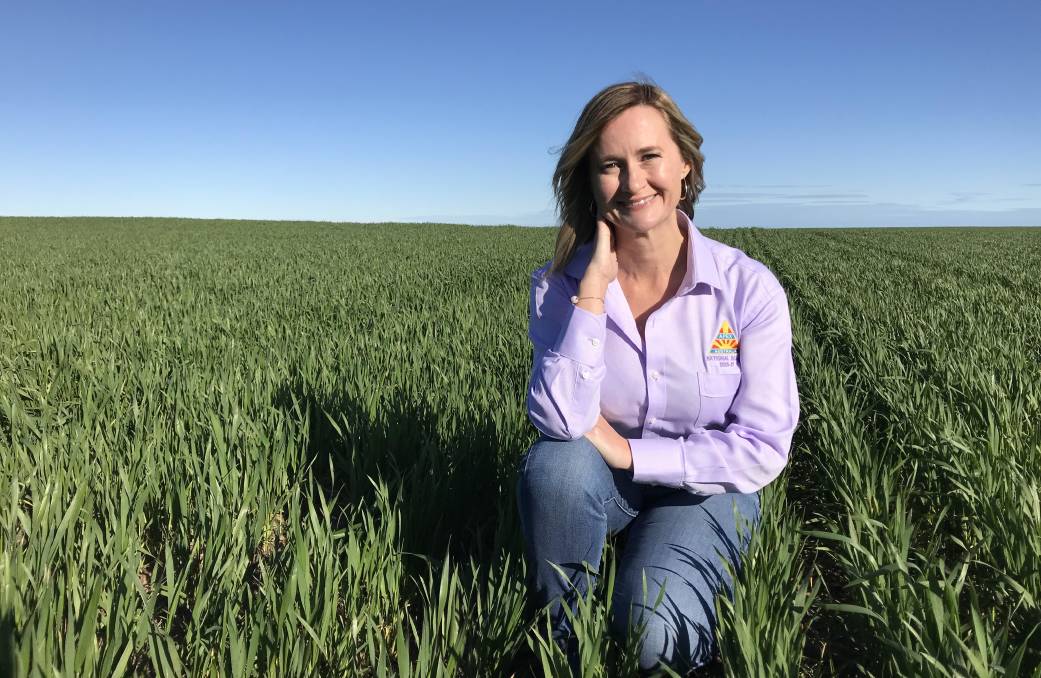 Yorke Peninsula farmer and psychologist Bethany Paterson can add another string to her bow - since the start of the month, she is also the national president of volunteer community service organisation Apex Australia.

Yorke Peninsula farmer and psychologist Bethany Paterson can add another string to her bow - since the start of the month, she is also the national president of volunteer community service organisation Apex Australia.

Following the changeover on July 1, she is the first national president to come from the Kadina club, and only the second woman to take on the role in its 90-year history.

The sixth generation Bute farmer runs a cropping operation with husband John Duka, as well as her own psychology practice in Kadina.

Until last year, they also operated a piggery, with Bethany "going viral" in March for a post about the closure of their family's piggery operation, urging people to support Australian produce.

This post also caught the attention of animal activists, something Bethany says was tough but also reminded her of her own strength.

Bethany joined the Apex Australia national board in 2018, first taking on the role of communications director, then national secretary, before taking on the top job.

But she also held a number of roles at the Kadina club, including president, before moving onto the national stage.

Bethany said the Apex Club, which is particularly strong in regional areas, had done a lot of good in the local area.

Most recently, the Kadina club was involved in the Apex Outback Postie Bike Ride, which has raised more than $1 million and helped them to build Copper Coast Retreats, a free holiday home for people affected by cancer.

They also lease land from the council and operate a farm to raise money for everything from running the local Christmas pageant to helping children in need of lifesaving surgery.

Volunteering not only helps others, it could change your life. - BETHANY PATERSON

Bethany said much of her role would be tied up with the administration of the national board but she also had the opportunity to drive a few projects.

As well as increasing membership, including of women, she has set improved mental health for men as a target.

"Apex has traditionally been an all-male organisation, and it still tends to be a lot of blokes," she said.

"As a psychologist, I know many men aren't very good at seeking help. They're getting a lot better but it still needs work."

Bethany said like all volunteer organisations, there had been a fall in numbers in recent decades.

"But one thing COVID-19 has taught us is the importance of social connectedness," she said.

"Sports and service clubs bring people together in a meaningful way for a common goal.

"Clubs are just as important now as they ever were, and I'd encourage people to take a look at what's available in their communities.

"Volunteering not only helps others, it could change your life."

Allan forges trail ahead in Clare

Helping the community is practically "in the blood" for Bethany.

She grew up watching her parents Ros and Neil Paterson engaged in many community roles, and is in the somewhat rare position of having both parents as Order of Australia recipients.

It was Neil's influence that encouraged Bethany to join Apex when she began thinking about community work.

He is a life member of Apex - as well as of the Yorke Peninsula cricket club - and Bethany spent years watching him volunteer.

"He and his Apex mates were my childhood heroes, building playgrounds and laying the foundations for the local homes for the aged, and what they taught me was that fun and friendship comes disguised as service work," she said.

Her mother also helped inspire her to "take another step" and join the national board, after she passed away.

"She was a pretty amazing lady, and I thought, 'what am I doing to challenge myself?" Bethany said.

Ros was a life member of the Kernewek Lowender Festival.

"They were both tireless workers for the community and that was a priority for them," Bethany said. "It instilled in me, from an early age, that community is important."

It's a message she wants to pass on to her two sons.

"I always talk to kids about how important it is to give back," she said.

As well as Apex, Bethany and her husband John Duka are both involved in the local hockey club - John is the president - and played a large role in the grants for the new synthetic hockey pitches in the region.

"I've always been one to take on a challenge," she said.