Many of the state's sheep producers are optimistic of achieving higher lambing percentages than 2019, with ewes lambing onto green feed - in some cases for the first time in years - and mild weather as the lambs have dropped. Many of the state's sheep producers are optimistic of achieving higher lambing percentages than 2019, with ewes lambing onto green feed - in some cases for the first time in years - and mild weather as the lambs have dropped.

With good ewe nutrition many have also seen higher twinning rates when they scanned mobs earlier in the year.

Unfortunately, the good season is not statewide, with many areas outside Goyder's Line still desperately dry and percentages set to suffer.

Talking Livestock consultant Deb Scammell says much of the lamb marking in the Barossa and Mid North is still to come in the next two to three weeks.

But some of her early lambing clients have achieved "slightly higher" lambing percentages than 2019.

She says there have been a few outstanding results from those who have lambed twin-bearing ewes down in smaller mob sizes of about 100 head, resulting in less mismothering, with good shelter.

"A client north of Jamestown with twin bearing mobs has achieved 170 per cent to 180pc in Merino ewes, which is outstanding," she said.

"A lack of shelter is a big factor in lamb survival.

Clients for the past few years have got used to lambing on nothing and because we have had green feed, some of them have been caught out, - Deb Scammell

"Last year we lost quite a lot of lambs on one windy, cold, wet day, but we haven't had those terrible conditions this year and producers are becoming more aware of choosing sheltered paddocks for lambing ewes."

But Mrs Scammell has noticed more ewe deaths prior to lambing from pregnancy toxaemia and mineral deficiencies, especially in twin-bearing ewes.

"Clients for the past few years have got used to lambing on nothing and because we have had green feed, some of them have been caught out," she said.

"We want to have ewes in condition score 3 to 3.5 during pregnancy, but I have definitely seen a lot of over-fat ewes in 4 to 4.5 (condition score)."

Mrs Scammell is a big advocate of training lambs onto grain by having the lambs follow their mothers to self-feeders or trail feeding in paddocks and is working closely with early lambers on this.

"Very high weight gains can be achieved from lambing to weaning," she said.

"It is important that we imprint feed lambs so they don't go backwards after weaning."

Pinion Advisory agribusiness consultant Tara Graetz says the Mallee and Upper South East are also on track for higher lambing percentages than last year due to producers nutritionally setting their ewes up well and the great start to the season.

"There are still a number of people who don't see the value in scanning," she said.

"But we are seeing more producers scanning ewes for twins and singles to manage them accordingly and this is having a significant impact on lamb survival.

"The Mallee has had a few tough years in a row, but we are seeing producers lambing down on green feed, which is quite exciting."

Ms Graetz says many clients had reported a higher proportion of twins in mobs at scanning and favourable lambing weather would be beneficial.

"We haven't had the number of frosts we expect in June," she said.

"We had a week of cracking frosts, but the weather has been wet and cold rather than wet and bitterly cold, which certainly helps lamb survival."

But with little to no winter rainfall, he expected lambing percentages to be "very varied".

"Farming areas south of Port Augusta, the lambing percentages have been very good with a lot of farmers over 100pc, but feed is tight and hand feeding continues," he said.

Mr Paul said the pastoral country had only just commenced lambing, but those who had big falls in February and still had good feed would achieve good percentages.

This result would not be widespread though.

"A lot of our country has had minimal rain, with some places having not recorded a rainfall event better than 10mm for the year after a successive five years of dry times," he said.

"For these places that still have sheep, lambing will be tough without good rainfall over the next month."

Mr Paul said the numbers of ewes joined this year was way down, with many stations east of the Flinders Ranges fully destocked or down to 10-20pc of breeding ewes, while in other areas near Port Augusta, producers were only running 40-60pc of their optimal stocking rates. 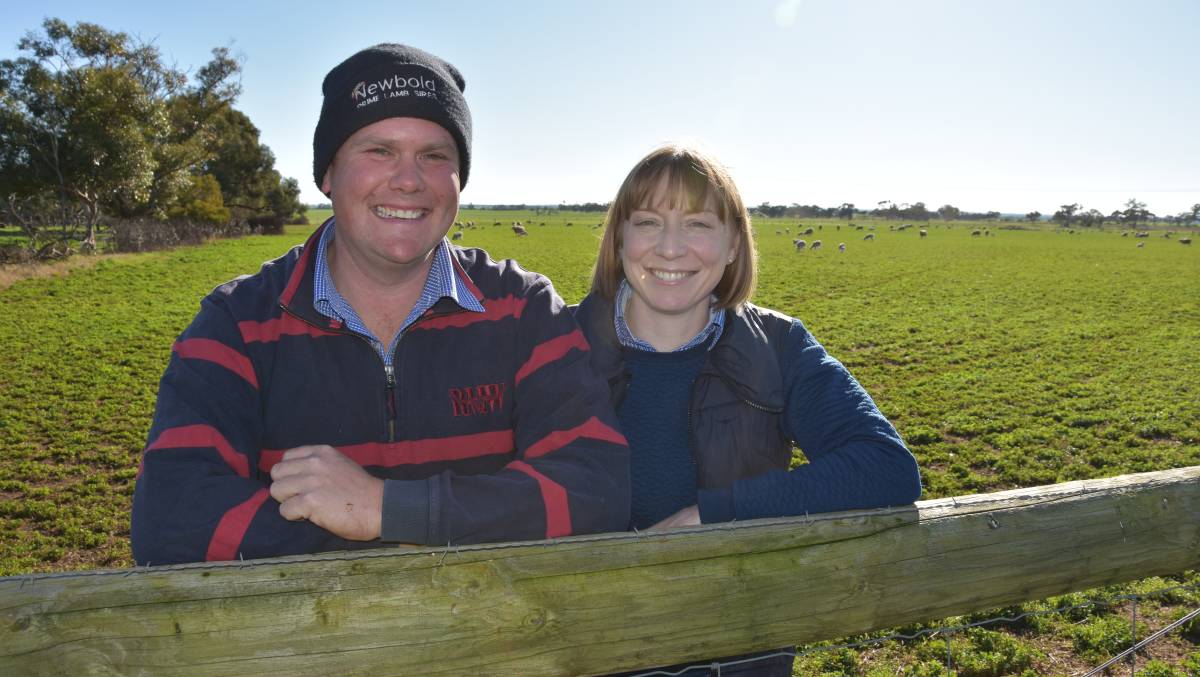 THE good condition of ewes at mating at the end of last year has helped the Newbold stud at Gawler River achieve its best-ever lambing result.

The stud scanned 175 per cent lambs from their 500 Poll Dorset and White Suffolk ewes, when a good year is normally 165pc.

Newbold principal Bill Close put the extra 10pc down to the quality condition the ewes were in at mating (November/December), which then resulted in more twins than normal.

Normally if you get 100pc lambs, you're happy, particularly because we AI our best hoggets. Well, we scanned 165pc. - Bill Close

"Last year had been pretty tough, so we had been supplementary feeding to keep their weights up," he said.

"We also had a reasonably early harvest, so the ewes were on stubbles early and at mating. We must have been doing the right thing because of the number of twins we have had."

"Normally if you get 100pc lambs, you're happy, particularly because we AI our best hoggets. Well, we scanned 165pc," Mr Close said.

"We would normally lose about 5pc over winter, but we have lost hardly any lambs this year," he said.

Mr McLachlan said they only had 230 millimetres of annual rainfall last year.

This year, they have recorded 220mm to-date.

"Hopefully the season keeps going like this and we may end up getting our annual rainfall," he said.