Producers hoping for an improvement in the market may be "self-defeating" as stockpile grows. 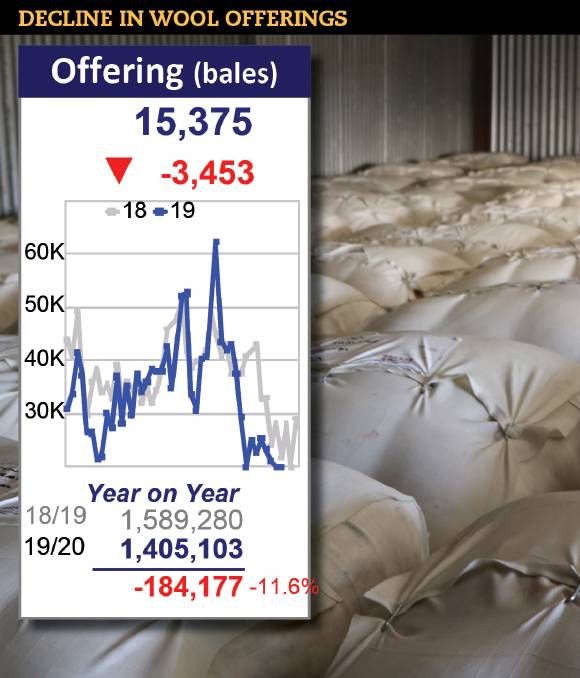 The national offering of wool hit a 25 year low last week and it is estimated over 200,000 bales of wool are currently being stockpiled at warehouses. Inset photo AWEX.

A predicted flood of wool entering the market in the new financial year could tip the already volatile commodity over the edge according to industry experts.

Not since the wool stockpile that accumulated due to the collapse of the Reserve Price Scheme at the start of the 1990s has the industry seen anything similar concerning the number of bales stored at wool warehouses and in sheds on-farm.

Nutrien north-east wool manager, David Hart, said he understands growers are hoping that there will be an improvement, but this may be a little "self-defeating".

Furthermore, many producers are being advised by their accountants to hold off selling their wool clip until next financial year.

"A lot of growers are in that same situation and that stockpile that is forming is growing," Mr Hart said.

"There is the potential for a large amount of wool to hit the market rapidly and at fairly short notice.

"It would have a pretty obvious effect on the market."

He said the amount of wool that is in sheds is guess work and equally wool that is in warehouses can be difficult to accurately count because it is somewhat "commercially sensitive" from a broker's point of view.

"In the meantime, using our own estimation with figures in our own company, we are guessing that there are about 200,000 bales on hold nationally," he said.

"The fact that sheep prices are quite high and a lot of people sold stock to reduce their stocking rates through the drought, means there is an element of holding wool over into the next financial year."

Wool, according to Mr Hart, is the one commodity that farmers and graziers produce that they are not under pressure to sell for time reasons.

"From a financial point of view, wool can be a producer's tool to manipulate their levers of their own business," he said.

From a financial point of view, wool can be a producer's tool to manipulate their levers of their own business - David Hart, Nutrien North-East Wool Manager

"Wool is not perishable, but when stock has to go, they have to go. Wool doesn't eat grass or drink water. It doesn't really deteriorate in quality, so it can be held on to."

Nutrien area wool manager at Crookwell, Ally Jaffrey, said producers have sold more sheep at this time of year than they normally would.

"I have a few clients that are holding their wool over until July because they have sold surplus stock earlier than they usually would," Mrs Jaffrey said.

"Next year they are not going to have that stock to sell because they have already sold that age group that technically shouldn't go until next year.

"It's a case of perhaps they would usually run a couple of years worth of wethers, but they can't do that now because they have already sold them."

According to Australian Wool Testing Authority (AWTA) the monthly comparisons of total lots, bales and weight for May 2020 compared with the same period last season are down by 30.6pc, 28.5pc and 28.2pc respectively.

The story Producers holding on in hope of better price first appeared on Farm Online.