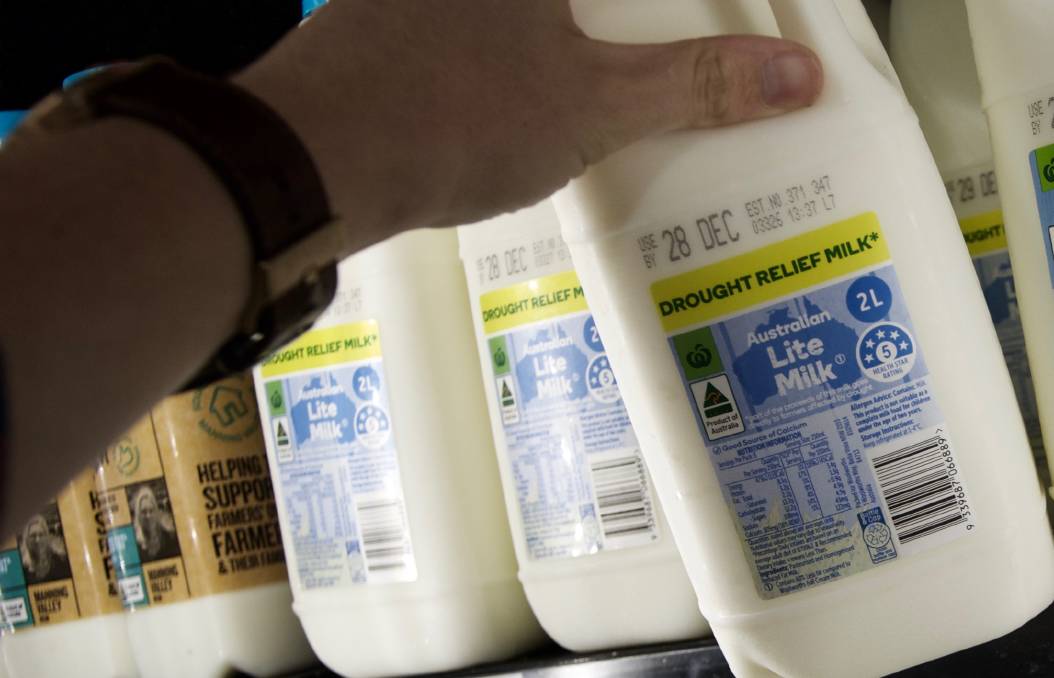 Woolworths is extending its "drought levy" retail price on fresh two and three litre house brand milk lines for another year, expecting to generate about $30 million in extra payments to its milk producer suppliers.

The supermarket will also establish a separate $5m fund to provide infrastructure and technology grants to help farmers lift efficiency and profitability in the next three years.

It has raised about $50m for dairy farmers since Woolworths the initiative started at a local level in September 2018.

Our levy has already provided much-needed relief to dairy farmers and we're grateful for our customers' support of the program - Paul Harker, Woolworths

However, ADF also called for the consumer levy to be built into the farm gate milk price in the long term.

The response from sympathetic consumers was so strong, Woolworths extended the 10c levy across its housebrand range five months later, phasing out its drought milk line.

Although autumn rain has relieved dry conditions in many parts of eastern Australia, drought conditions linger, especially in southern Queensland.

Woolies has opted to maintain its levy commitment, although broadening the levy terms so the funds generally help farmers lift on-farm profitability.

Based on current volumes, these support payments are expected to contribute an extra $30m to its 450-plus farmer suppliers by June 2021.

The company said extending the support would help provide certainty on farms supplying its Woolworths brands.

The move coincides with the dairy industry's mandatory code of conduct taking a new step this week as processors reveal their prices and contract arrangements for the year ahead.

"While conditions have improved and farmgate prices have gone up since we started the levy in 2018, we're extending payments to provide certainty while dairy farmers and processors find their feet under the new mandatory dairy code.

"To build on our existing support, we're also working to establish a dairy fund to offer financial grants for dairy farmers to invest in new infrastructure or technology to improve profitability."

The $5m fund would be paid for independently by the retailer in addition to the money collected from the consumer levy.

Woolworths was engaging with dairy industry stakeholders on the design of the program and expects to open for applications later this year.

ADF said it looked forward to working with Woolworths on future initiatives to maintain a sustainable dairy industry, including its new $5m fund.

To stop farm exits and hardship all retailers need to increase the price of their store brand retail fresh milk to $1.50 a litre - David Inall, Australian Dairy Farmers

However, chief executive David Inall noted the farmer body believed sustainability would be greatly improved if generic milk prices increased to $1.50/litre, at least until changes were made to the Food and Grocery Codeto establish appropriate value distribution up the supply chain to farmers.

"If we are to stop farm exits and hardship, then all retailers need to increase the price of their store brand retail fresh milk to $1.50 with the increase going back to farmers via their processors," he said.

No changes at Coles

Coles said it would continue to collect 10c/litre from the sale of its $1.10/l house brand milk for distribution to farmers.

Between March 20, 2019 and May 31 this year Coles had provided processors approximately $21.8m from the 10c levy for distribution to farmers.

In South Australia and Western Australia it also dedicated 40c from the sale of each two litre bottle of SADA Fresh and WA Farmers First milk to the state's respective milk producers.

Additional financial support was made to contracted farmers to help them with water needs as drought conditions deteriorated last summer.

Woolworths also purchases milk directly from around 20 dairy farmers for its Farmers' Own range and will publish its pricing agreements in line with the requirements of the dairy code code of conduct.

The federal government's mandatory dairy code was introduced to address what the Australian Competition and Consumer Commission determined was an imbalance in bargaining power between dairy processors and farmers.

From June 1 processors must publish their standard form milk supply agreements to cover all the circumstances in which they intend to purchase milk in the coming financial year.