Ian Turner has been attending the Royal Adelaide Show for more than half a century, in an incredibly diverse range of roles. Shows are seemingly in my DNA. It is a family trait of deep involvement in the community that we live in and working for the betterment of those communities.

Just as the Royal Adelaide Show was founded from the state's early Agricultural Bureau movement, the same occurred on Kangaroo Island.

My great-grandfather and two great-great-uncles settled at Wisanger/Smith Bay in 1882. They were heavily involved in improving the agricultural fortunes of all trying to make a living from agriculture and feed the state and nation.

My great-great-uncle John and great-grandfather George were founders in the Shoal Bay Ag Bureau. John became chairman of the KI District Council and was the inaugural president of the KI Agricultural and Horticultural Society, with the Governor attending and opening the first KI A&H Society in 1911, I believe.

All members of our family have been deeply involved ever since, including me. I first became a convenor (of the poultry section) in 1963 aged 12 and apart from the three years I was away at Marcus Oldham College, I served on the committee, including terms as secretary and president, until 1995 when I joined Rural Press in Adelaide.

We saw all the livestock, but like most kids, we went to the sideshows.

An aunt on my mother's side was a champion rider in the equestrian section at Adelaide, but I had no direct connection with this show until my first trip to Adelaide when I was about 10. Mum, my sister and I came over for the September school holidays in an Airlines of SA DC3 and stopped with another of my mother's sisters and her family at Colonel Light Gardens. Part of that time was spent at the Adelaide Show.

Naturally, we saw all the livestock, but like most kids, we went to the sideshows with our cousins. The Gee Whiz was about the scariest ride back then, but we enjoyed the Ghost Train where we squirted the "ghosts", that hid behind each set of doors with our water pistols. The sample bags were just that: samples of good everyday products that were often free or at very little cost, unlike the stuff jammed in them and sold at ridiculous prices these days.

This show trip became an annual event, with my father coming across for the Merino ram sale, where we usually bought rams from the Lang family's Whyandra stud. I was usually "in tow" during these ram sales, where Collinsville and East Bungaree regularly dominated the top prices.

In 1959 we established a Border Leicester stud, then added a Suffolk stud in 1964 to be run in conjunction with our fine/medium wool Merino flock on our property. I became very interested and involved in the studs from the start, so observing the results of Adelaide judging of these breeds became part of the trip.

Upon return from Marcus Oldham at the end of 1972, my parents gave me full rein to manage the sheep studs. At the same time I joined the Rural Youth movement and as president of the Kingscote club in 1974, we saw it grow to be the biggest club in SA with more than 50 members.

From 1973, Rural Youth trips to the Royal Adelaide Show for the state judging finals were something members looked forward to. I entered and won through to the meat sheep judging in 1973. This started a run of being involved in entering various competitions at Adelaide for 22 consecutive years, until I joined the Stock Journal livestock department, in support of John Illsley, subsequently taking over his position of livestock manager when he retired.

As a promotional tool, showing brought many stud sales we would not have gained otherwise.

From 1973 to '76, the Rural Youth camp at Scotty's Motel was a fabulous time. I was fortunate to win the state finals for both the meat sheep and pig judging in the years of 1975 and 1976 and was runner up in beef cattle in '75 I think. This latter one meant I was eligible for the national final a couple of days later, along with the state winner, Tony Clarke from Tarlee. There were no national finals for the meat sheep or pigs in those days.

Also in 1976, we believed we had reached a pretty reasonable standard with our stud sheep so I bit the bullet and entered Suffolks for the first time. I built a crate for our ute, loaded up two ewes and one ram and caught the Troubridge. Travel time meant we arrived on Wednesday late morning for Friday judging after a six-and-a-half-hour voyage, plus the extra time before sailing that had to be factored in.

To come home after 11 days with two third prizes was a motivating debut. A bigger team the next year meant organising a carrier to deliver our sheep. From pick up to unloading they were in transit for 18 hours, which knocked them around a bit, especially if it was at all rough. They usually took three or four days to "recover", but we still fared well. Lifetime friendships were formed with fellow breeders from those first showings, especially with Geoff Gale, Andrew Frick, Ian Pfeiffer, Andrew Michael and the Day family.

Attracting potential buyers to our stud sheep sales was the objective as the "water barrier" was a big inhibitor in attracting mainland support. So, employing the theory "if Mohammed wouldn't come to the mountain, then we'd take the mountain to Mohammed", we extended our showing to Borders as well and added the Melbourne and Perth Royals into our program.

Later Poll Dorsets and White Suffolks were added in the early to mid-1980s.

Showing up to 30 sheep in four breeds took a bit of family organising. The advent of the Philanderer boat from Penneshaw meant we could load early in the morning and unload the sheep just over four hours later, although with our transit vehicle, it meant three trips over and back to get 30 sheep there and the same to return.

There were many highlights during our sheep showing experiences, with the inaugural White Suffolk showing in the country at Adelaide being top of the list. We won four of the eight classes, both ewe broad ribbons, and with four seconds and a third as well, we were easily the most successful exhibitors. We returned the next year to win reserve champion ram and the ewe championship again.

As a promotional tool, showing brought many stud sales we would not have gained otherwise, and through this period we were able to grow our annual ram sales from about 40 rams in 1975 to more than 350 twenty years later.

Joining the Stock Journal in 1995 meant an even deeper involvement at the Adelaide show, if possible. Show week was an intense labour of love, covering the livestock events, getting all the adverts, organising required photographs, and then after full days, processing everything needed for the two show issues. This often involved all-nighters on the first Monday to get the first issue out on time. 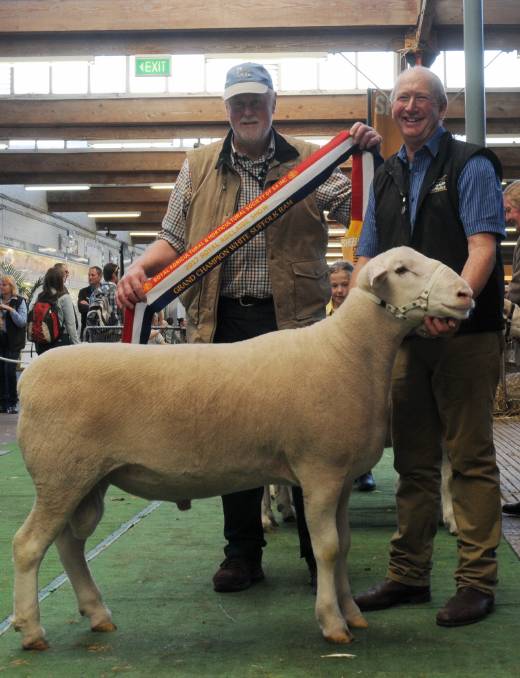 After leaving Rural Press in 2003 to run our own business, Superior Selections, I was contracted back every show week. I also ended up with the main advertising and clients' sheep photography role. John Rothwell has an enlargement of one of my photos in his office; that of the first schools' wether competition.

In my Stock Journal time, to keep my finger on the pulse, I bought some Shorthorn cattle, kindly run by Andy and Sally Withers at Naracoorte on share management. These even saw a couple of trips up to Adelaide, winning a blue ribbon or two.

I was fortunate to be invited to judge sheep at Adelaide about five times up to 2003, which was a great honour.

Somewhere in the period from 2000 onwards, I ended up as MC for the interbreed judging, taking over from Dick Sampson, and it was only by heading to Qld to visit family during the first part of the show in 2018 that I was able to relinquish that role. We snuck down later in the week with two of our grandchildren though; and I was back again taking photos in 2019.

To say the Royal Adelaide Show has been a big part of my life is somewhat of an understatement.

Thus, my involvement as a competitor, judge, steward, commentator, media rep, and photographer has spanned some 48 years, but my attendance as a spectator extends back at least a decade further. From 1975 onwards that has been with the blessing of my very patient and forgiving wife, Wendy, and family. I am a proud life member and look forward to the next opportunity to visit; hopefully in 2021 with grandchildren in tow and maybe taking a photograph or two.

However, the biggest association with the show is that our second daughter Natalie was burn on August 31, 1978, the day before the show and when I would normally have been up preparing sheep.

Every year her birthday was during the show, so we never had a proper birthday celebration for her. Thus in 2018, the reason to head to Qld was to celebrate her 40th with her.

To say the Royal Adelaide Show has been a big part of my life is somewhat of an understatement!