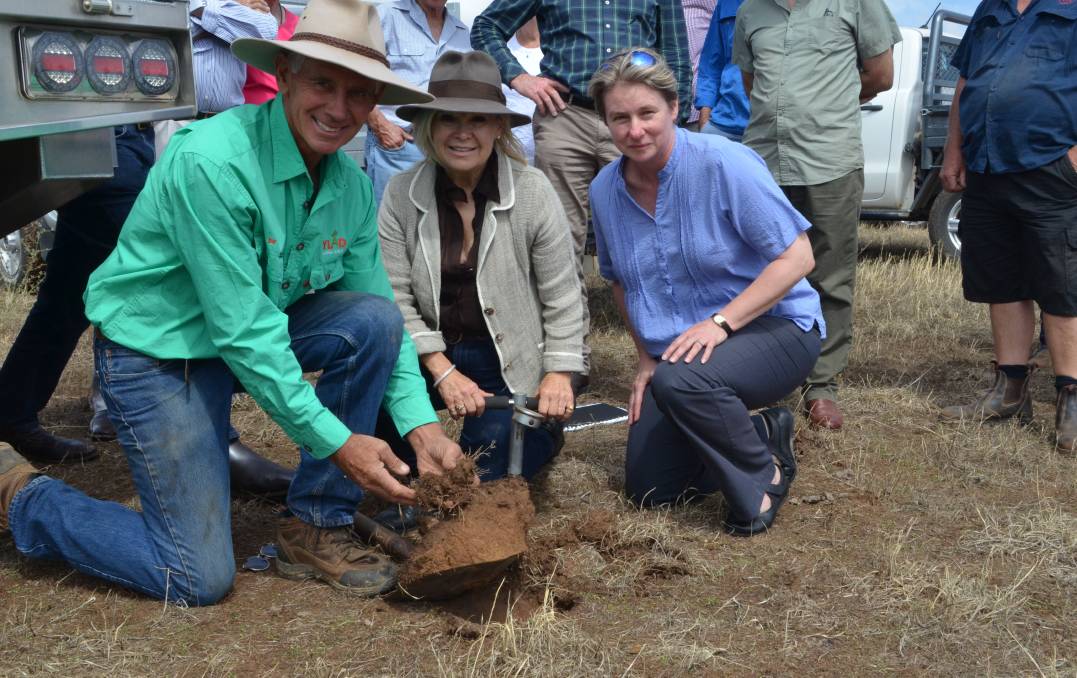 Looking at the healthy soil on their Young district property - Bill and Rhonda Daly examine a shovel full of viable soil with Dr Shane Powell, University of Tasmania, Hobart.

Why do healthy soils have such a delightful aromatic whiff?

That is the question micro biologist at the University of Tasmania Dr Shane Powell and her team are tackling in a ten one year project in conjunction with the Soil CRC.

Focusing on high performing soils is critical for the survival of landscapes, animals, plants and ultimately human life and Dr Powell said improving understanding of the nature of soil is the basis of her current research.

"I am fascinated by microbes, they are all around us, we should not be concerned by this, bacteria are essential for our ecosystem," Dr Powell said.

"We wouldn't be breathing oxygen if not for the bacteria that existed in prehistoric times."

It is important to understand that soil is complicated.

A shovel full of soil is a series of integrated systems, and Dr Powell pointed out each system cannot really be understood in isolation.

"Soil is variable, even within one paddock differences in the soil can be seen, she said.

"Soil is exposed to many external influences such as weather and farming practices."

Dr Powell noted a healthy soil is a conduit for the exchange of nutrients between plants, bacteria and the atmosphere, and all dependent on the other.

"There are always inputs and outputs and they must be balanced," she said.

"Even if you don't think you are using inputs, if you have nitrogen fixing bacteria in your soil they are grabbing nitrogen from the atmosphere and converting it to ammonium in the soil.

The diversity and complexity of the organisms living in soil is another level again and Dr Powell said the below ground biology includes insects, worms, nematodes, protozoa, microbes, fungi and bacteria all having an influence upon the ultimate health of the soil.

"Many we can't see but they are all incredibly important, she said.

"In a random handful of soil you can find several thousand different types of bacteria all contributing as living organisms which are vital for soil to operate at its optimum."

"It was important evidence that living organisms are vital for the soil to function at its most optimum, she said.

"Soil is a life support system and without it nothing would really function very well."

Soil biota aids in the decomposition of organic matter, nutrient recycling, increasing the availability of nutrients; it can cause disease but the bacteria and microbes within the soil can also suppress disease.

"Healthy soils stimulate plant growth and this seems to work best when you have a group of organisms which reduce the effect of pathogens," Dr Powell said.

So how do we measure the odor of healthy soil?

Dr Powell said it is a bit like smelling coffee.

"It just smells good, we can't define the smell but we know it is coffee," she said.

Dr Powell said we can recognise the smell without being able to identify each compound in the soil but the odor does indicate something about the biological activity in the soil.

"The aroma is a result of a whole lot of compounds associated with activity of soil biota including the decomposition of the organic matter in the soil," she said.

"The smell depends, in part, on the type of organic matter present to start with and what organisms are breaking it down.

"It's not only produced by bacteria in the soil but the fungi and bacteria associated with the plants also produce compounds which emit aromas.

"It may not be possible to identify the definitive healthy smell because each soil type is different, with different bacteria and fungi.

"What happens on a grain farm will be different to an apple orchard and we don't know if the same healthy soil smell will be found in all soil types equally.

"That question will be explored in future research."

The story Investigating the aroma of healthy soils first appeared on The Land.