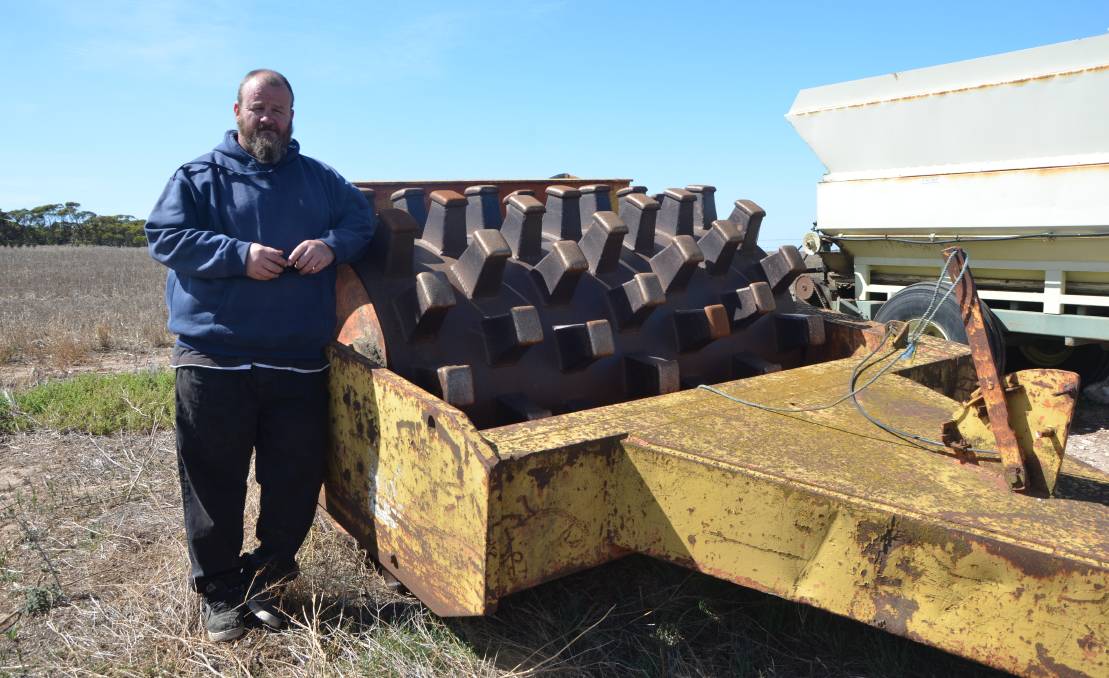 HANDY IMPLEMENT: Mic Wadewitz with a padfoot compaction roller, which has been a useful tool in aiding crop growth on non-wetting sandy rises.

DUSTING off an old tow behind padfoot roller was part of an innovative trial that has seen Mic Wadewitz drastically improve crop growth on non-wetting sandy rises at Brinkley.

DUSTING off an old tow behind padfoot roller was part of an innovative trial that has seen Mic Wadewitz drastically improve crop growth on non-wetting sandy rises at Brinkley.

Working as the farm manager at his family's Peats Soils site near Langhorne Creek, Mr Wadewitz has been able to grow wheat for sheep grazing on sandy rises where he would have only dreamed of growing a crop in the past.

In a method he calls dune cupping, Mr Wadewitz spreads compost on the sandy rises, then tows a padfoot roller over the area, creating cup-like indentations in the soil.

This is followed by another compost application with a side-casting spreader, followed by the sowing of wheat strip trials.

The method improved moisture retention in the soils with less runoff after rain, and has also stabilised the sandy rises due to the compost incorporation, giving wheat plants a solid anchor during windy days.

"We went through a paddock just after a 30-millimetre rain event to see how much water had run off the sand without penetration - the water sits on top and drains down to low spots," he said.

"I noticed some pitting on some soils where nature was doing what it needed to get organic matter down into that soil. I thought, 'what can I do to replicate what nature was doing, but on those sandy rises as well?'

"It just so happened that we had an old padfoot compaction roller so I hooked that up to a small tractor and ran over the non-wetting sands, putting little pots or cups in the ground.

"We then went over that with a compost spreader to see how well the compost would incorporate.

"Several weeks later we had a rain event. I went out afterwards and on the normal surface of the non-wetting sand there was about 2 centimetres of water penetration, whereas there was 15cm penetration below the cup."

Mr Wadewitz said while he had trialled surface spreading of compost, using the padfoot roller had provided improved compost incorporation and soil stabilisation.

"Spreading on the surface is not always the best method, especially on unstable grounds," he said.

"It takes a lot of time for the compost to draw down into the soil.

"If you're pushing compost down into those soils over the years using this cupping method, you're stabilising down to depth rather than just the top few millimetres.

"This method gives the wheat plant roots something to bind onto. When the wind comes through in the growing season, it doesn't blow your plant out of the sand."

He said depending on the type of compost he was spreading, he would apply about 18 cubic metres of compost on every hectare of non-wetting sandy rises.

"From an area where we wouldn't grow anything in and we wouldn't even consider reaping, we used those as grazing paddocks - we put sheep on there for three months," he said.

"Over time this could be a cost effective way of improving production on those non-wetting sands.

Like anything, labour is the most expensive part of it. We're lucky in terms of getting the compost out there, whereas other farmers would have to pay transport and so forth."

Mr Wadewitz said he planned on doing many more trials, including the incorporation of compost into non-wetting sandy rises using offset discs, followed by a pass with the padfoot roller and another compost application.

"We run a compost pellet down through our seeder, which gets placed right next to the seed," he said.

"There is a massive difference in the growth rate of wheat in our sandy rises just having that granule next to the seed providing moisture.

"We also put a compost tea down, a liquid nutrient, and our most recent results were the best we've had."