A convoy of nearly 30 trucks, laden with donated hay, travelled from Mount Gambier to Cape Jervis to deliver fodder to bushfire-ravaged farmers on Kangaroo Island. 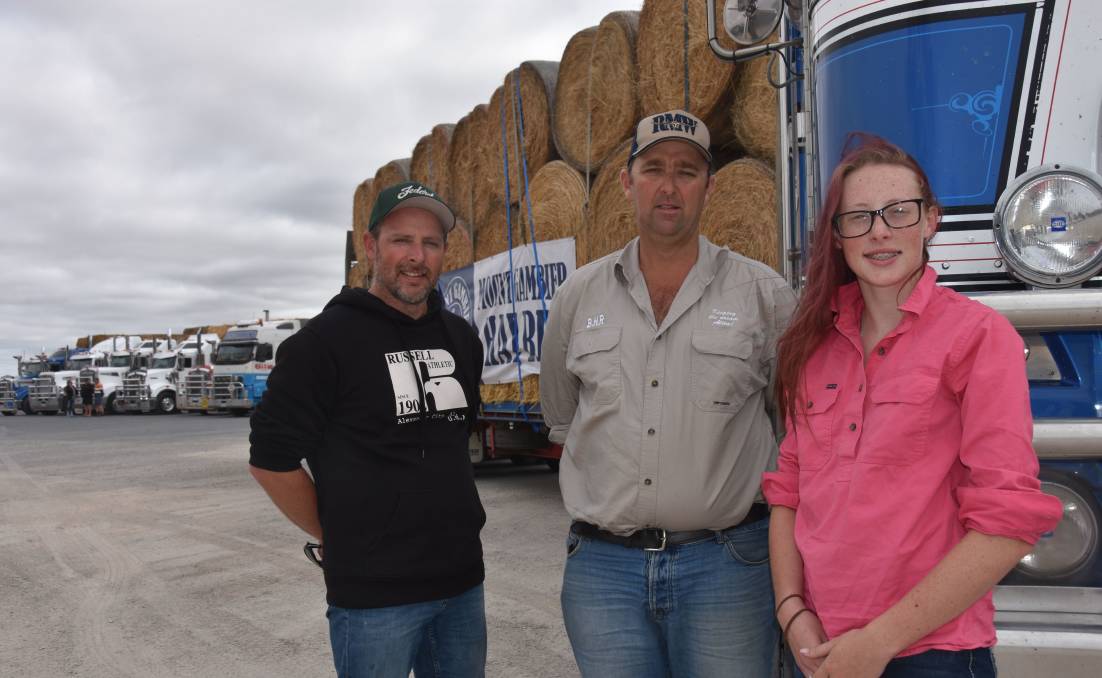 The Aussie spirit of giving to those in need was on show at the weekend, as a convoy of nearly 30 trucks rolled along the highway from Mount Gambier to Cape Jervis.

They were hauling 550 tonnes of fodder donated by about 60 South East farmers to help bushfire-ravaged farmers on Kangaroo Island.

In the past month, the Mount Gambier Hay Run has delivered hay to those in the Keilira fire twice, as well as 11 trucks joining the Burrumbuttock Hay Runners on the Australia Day weekend in NSW.

But Saturday's drive was on a bigger scale again.

The local hay run was born in December when teenager Zoe Simpson decided she wanted to help drought-affected farmers in NSW after seeing another young girl on television doing her bit.

She enlisted her father Scott Simpson and his best mate Adam Smith, both in the trucking industry, and it grew from there.

"We thought we might have ended up with four loads but we've had 55 loads given," Mr Smith said.

"The generosity has been unbelievable, not only from the farmers but also the carriers who have donated a lot of time and diesel to respond to the efforts."

You don't do this as an individual, so many people have made this possible - it is all the 'one per centers. - Adam Smith, Mount Gambier Hay Run

Most of the donated hay was unloaded at the Livestock SA depot at Cape Jervis and will gradually be freighted to the island - although two trucks completed the journey on the ferry straight away.

Mr Smith said it was "one of the most stressful weeks of his life" liasing with councils, the Road Transport Authority and all the drivers but it was all worth it to see the mountain of hay at its destination.

"You don't do this as an individual, so many people have made this possible - it is all the 'one per centers'," he said.

"The Burrumbuttock Hay Run is something that I'll probably never experience again but to help those in need in your own backyard is unbelievably fantastic."

Mr Smith was "disappointed and annoyed" the state government did not provide a fodder freight subsidy for fuel but undeterred they sought private donations, raising $40,000. This included $30,000 from the Australian Lions Foundation and $7000 from Rotary Lakes.

The state government has, however, contributed $120,000 to cover the ferry costs to get donated hay to the island, with the return passage of a truck and trailer costing about $1600.

"This will make sure all of the producers who have registered with us should be able to receive a semi load and it will give them more time to work out what they are going to do next," he said.

"We have to continue to acknowledge the work that Adam and Scott did to pull this together. A lot of people did not know how to help but they have provided a mechanism to help those in the SE to help."

THE state government has this week announced an additional $60,000 to cover the ferry cost of delivering more donated hay from the Livestock SA depot at Cape Jervis to Kangaroo Island.

And while Livestock SA chief executive officer Andrew Curtis has welcomed the decision, he has renewed calls for road fodder freight subsidies for all SA drought-affected and bushfire-affected farmers having to haul hay long distances.

"We recognise the national agreement not to have government subsidies due to their distorting effect on the market, but we have seen the NSW government spending billions in freight subsidies for their farmers," he said.

"We have expressed concern to the state government for a long time about the disadvantage our producers have and that hasn't changed - if anything it has got worse with Vic now offering subsidies for those impacted by the bushfires."

Mr Curtis said KI was dealing with an "exceptional circumstance".

Normally self-sufficient for hay supplies, he said KI now faced an estimated deficit of 30,000 tonnes to 40,000t to feed livestock, with the only option hauling hay long distances.

Member for Barker Tony Pasin has also called on the state government to "step up" and offer fodder freight subsidies after the Mount Gambier Hay Run was unsuccessful in receiving funds for fuel.

"It seems ridiculous that local hay could be taken to NSW or Vic with subsidies from those governments but we have to rely on private donations to get it to our SA farmers that desperately need it," he said.

'I am grateful that non-for-profit organisations such as the Lions and Rotary Clubs as well as private citizens have footed the bill to ensure our SA farmers do not miss out. Unfortunately however, this is diverting resources away from other worthy bushfire recovery related projects."

Primary Industries Minister Tim Whetstone said getting fodder quickly to fire affected-regions had been a "critical priority" and to ensure the flow continued it had offered the extra money to cover another 30 truck loads of hay.

"What makes this a great recovery initiative is seeing the support coming in from other producers across the state as generous fodder donations continue to flood into the Cape Jervis drop off depot," he said.

Mr Whetstone did not comment in response to Stock Journal's query about the government's position on a broader fodder freight subsidy.