This year marks the 100th anniversary of SA wool producers AJ&PA McBride, with the history of the family-owned company documented in a book written by Kristin Weidenbach, which was launched this week. 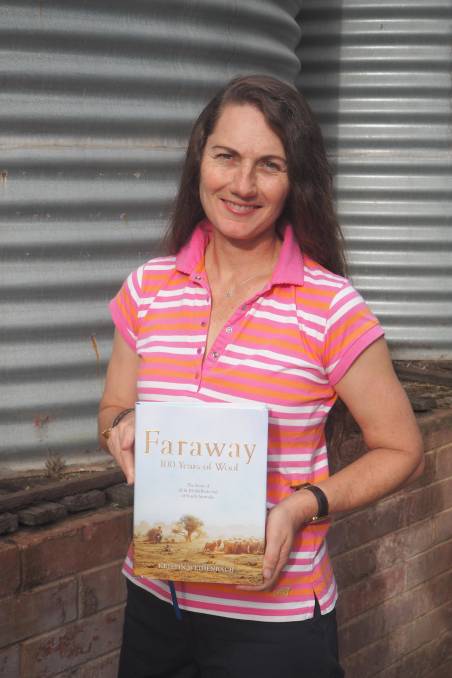 FASCINATING TALE: Kristin Weidenbach, author of 'Faraway: 100 Years of Wool', with the book, which launched yesterday.

This year marks the 100th anniversary of SA wool producers AJ&PA McBride, with the history of the family-owned company documented in a book written by Kristin Weidenbach, which was launched this week.

Titled Faraway: 100 Years of Wool, the book tells the story of the McBride family business across the decades, through a careful balance of facts and anecdotes, according to Ms Weidenbach.

"I try to avoid just having all the facts about one station, then all about another. so people can read along and get to know the people, and feel like they know the different parts of the country, and how it all fits into the broader wool industry," she said.

This is Ms Weidenbach's ninth book, with all her books having a focus on outback Australian history.

"I find country people very down to earth, they straight shooters who are humble, modest people who just get on with the job," she said.

"They're resilient, and stoic, and very practical and willing to pitch in to help out and get each other through difficult times, and celebrate the good times together.

"I like that the McBride story was a story of the land, and an SA story. I'm a South Australian and it's nice to be able to tell some good stories that come out this state," she said.

They've diversified in other things, but wool is why they were created, and wool is still the main focus of the business - KRISTIN WEIDENBACH

Ms Weidenbach began researching for the book in 2017, starting by reading all the board minutes and annual reports of the company from the past century, and an assortment of newspaper clippings.

She then interviewed members of the McBride family, including the late Peter McBride, who passed away in July 2018.

"Peter had a real direct link back to the founding of the company," she said.

"He hadn't been involved a lot in the day to day running of the company, but had been the longest and largest shareholder. It was great to get his reminiscence growing up with his father (Philip), he remembers discussion about tough times."

Ms Weidenbach said one of the highlights of the project was getting to visit THE company's largest property by area, Wilgena station, near Tarcoola.

"Being able to go there with the photographer, when shearing was happening, and seeing the big mobs of sheep, the shearers, station workers and dogs, and everyone working together like a well-oiled machine, I felt really privileged to have seen that," she said.

"It was such a quintessential Australian scene with clouds of dust rising up as the sheep were coming into the yards."

Ms Weidenbach admired the loyalty and careful nature of the McBrides, in addition to their unwavering focus on wool production.

"They've diversified in other things, but wool is why they were created, and wool is still the main focus of the business," she said.

"It was a really interesting project and we've produced a really handsome book out of it in the end," she said.