THE future of SA's ban on genetically-modified crops may be decided within days after state government legislation to overturn the moratorium passed the House of Assembly on Tuesday. 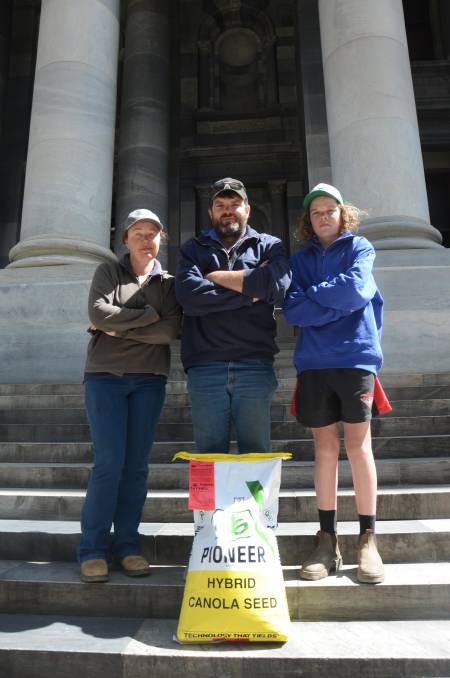 CHOICE: Eudunda graingrower Anthony Pfitzner, wife Linda and son Cooper, 14, took to the steps of parliament to voice their support for the bill that would overturn the GM ban, saying grower choice was the major reason the moratorium should be lifted.

THE future of SA's ban on genetically-modified crops may be decided within days after state government legislation to overturn the moratorium passed the House of Assembly on Tuesday.

The legislation will be voted on by the Legislative Council, which last week voted in favour of a disallowance motion put forward by Greens MLC Mark Parnell to thwart Primary Industries Minister Tim Whetstone's attempt to lift the moratorium via regulatory changes.

With Labor and SA-Best criticising Mr Whetstone for attempting to lift the moratorium via regulation, the Minister responded by introducing legislation on Tuesday.

"Last week we were challenged to bring forward legislation so we are doing exactly that," Mr Whetstone said.

"We will be asking the parliament to deal with the bill this week to provide our farmers with certainty for planning their 2020 crop.

"The Genetically Modified Crops Management (Designated Area) Amendment Bill 2019 will designate Kangaroo Island as the only place in SA where the GM moratorium will exist from January 1, 2020, until it expires on September 1, 2025, as per current arrangements.

"Lifting the GM crop moratorium will allow SA farmers to have the same choices as farmers in our neighbouring states.

"New and improved crop varieties will help farmers tackle drought and climate change as we look to provide our graingrowers with as many tools as possible."

While criticism has been levelled at the state government for trying to push the legislation through in a short timeframe, Mr Whetstone pointed to a 14-month Select Committee inquiry, extensive public and industry consultation, an independent review which suggested the moratorium had cost SA farmers $33 million since 2004, and recommendations of the GM Crop Advisory Committee as the evidence needed for the legislation to be passed.

SA-Best was contacted for its unequivocal stance on the GM moratorium, but did not respond before Stock Journal's deadline.

GPSA chief executive officer Caroline Rhodes said the bill would push all sides of politics to form a position on GM crops, rather than hide behind regulatory procedure.

GPSA has implored Labor and SA-Best to listen to the science and economic evidence and back what it says is long overdue reform for the benefit of regional SA.

"This issue needs to be settled this week to give farmers certainty for the 2020 season," Ms Rhodes said.

"SA agriculture has been unfairly stigmatised by anti-GM ideology for the past 15 years."

Ms Rhodes said growers wanted the freedom of choice to grow the crops that best suited their individual farming systems and make their own decisions about whether to grow GM crops approved safe by the Office of the Gene Technology Regulator.

"The momentum is behind SA growers and as we have seen from public consultation, the weight of public opinion is in favour of growers having freedom of choice," she said.

"GPSA will be seeing this debate through until the very end.

"We will continue to engage with representatives from both sides of the political divide to achieve a sensible outcome for growers."

For the state government's legislation to pass, they will need 13 votes in favour from 22 Upper House representatives.

Making up the 22 MLCs are nine Liberals, one from Advance SA, eight from Labor, two from SA Best and two from The Greens.

If the bill does not pass parliament this year, the state government will reconsider regulatory options.

Freedom of choice the goal for SA growers

Eudunda graingrower Anthony Pfitzner said lifting the moratorium on genetically-modified crops was all about choice for SA growers.

"Canola is only a minute part of this, it's not the big one," he said.

"The other benefits like the potential for salinity tolerance and frost tolerance in crops in the future is the bigger picture, which we are looking at.

"Soil benefits and other advantages we can gain is all research just waiting to happen." PLAYING POLITICS: Pinnaroo graingrower Corey Blacksell is disappointed agriculture has been used as a "political football" in the GM debate and wants farmers to have the power to decide which crops they grow.

While ambivalent about whether he would grow GM crops, Pinnaroo graingrower Corey Blacksell believes growers should have the choice on whether they use the technology or not.

He was frustrated with the use of agriculture as a "political football" by parties voting on the proposed changes.

"It's ideological bents that are preventing scientifically-proven technology from being used within agriculture," he said.

"We're expected to produce cheaper food more reliably, but we don't have the full use of technology - that is available worldwide - within SA.

"What I'm most disappointed about is the lack of choice.

"Consumers can choose not to consume products that have GM in them - they are clearly labelled - but we don't have the choice whether we want to use the technology or not.

"This process has been a political game."

Salter Springs agronomist Craig Davis shared Mr Blacksell's frustration with the political process, describing SA-Best and Labor's vote in favour of the disallowance motion as a "weak cop out", when evidence was laid out for them from the independent review and select committee inquiry.

Mr Davis said GM technology could have major benefits in the pursuit of effective weed control and improvement of yields.

He said the GM debate had largely focused on the use of Roundup Ready canola, with many spouting a misconception that the use of the crop would lead to more pesticide use.

"The conversation gets railroaded to herbicide tolerance and we know glyphosate is not the magic silver bullet because we've been using it for some years now.

"There is conversation that there's no other crops apart from canola and it's only glyphosate tolerance.

"There's other crops being investigated and of course there's market development that has to occur and the safety of those traits has to be proven."

WITH many voicing their support to lift the ban on growing genetically-modified crops in SA, the potential benefits of maintaining the moratorium have also been broadcast.

Independent scientist Judy Carman stressed she was not in the anti-GM camp, but contamination was inevitable wherever GM crops were grown, posing market risks to non-GM growers.

"In North America alone, there have been contamination incidents from growing GM canola, wheat, flax, corn, rice, alfalfa and creeping bentgrass," she said.

"Some of these have been from trial sites, before any commercial production.

"Losses have been in the billions of dollars."

Dr Carman was one of 26 international scientists that signed an open letter to SA politicians, supporting the retention of the moratorium.

"It's all very well to say farmers need choice, but so do consumers," he said.

"Another aspect is that introducing GM crops will inevitably mean contamination of non-GM crops."

"Substantial premiums are being earned everywhere for non-GM canola sold into Europe and Japan and there are big opportunity costs of losing the health and wellness market," he said.

"SA, Tas, the ACT and the NT have maintained their GM-free status since 2003, reconfirming the benefits of staying GM-free each time their bans were reviewed.

"Benefits outweighed the costs, risks and hazards to markets of allowing GM."