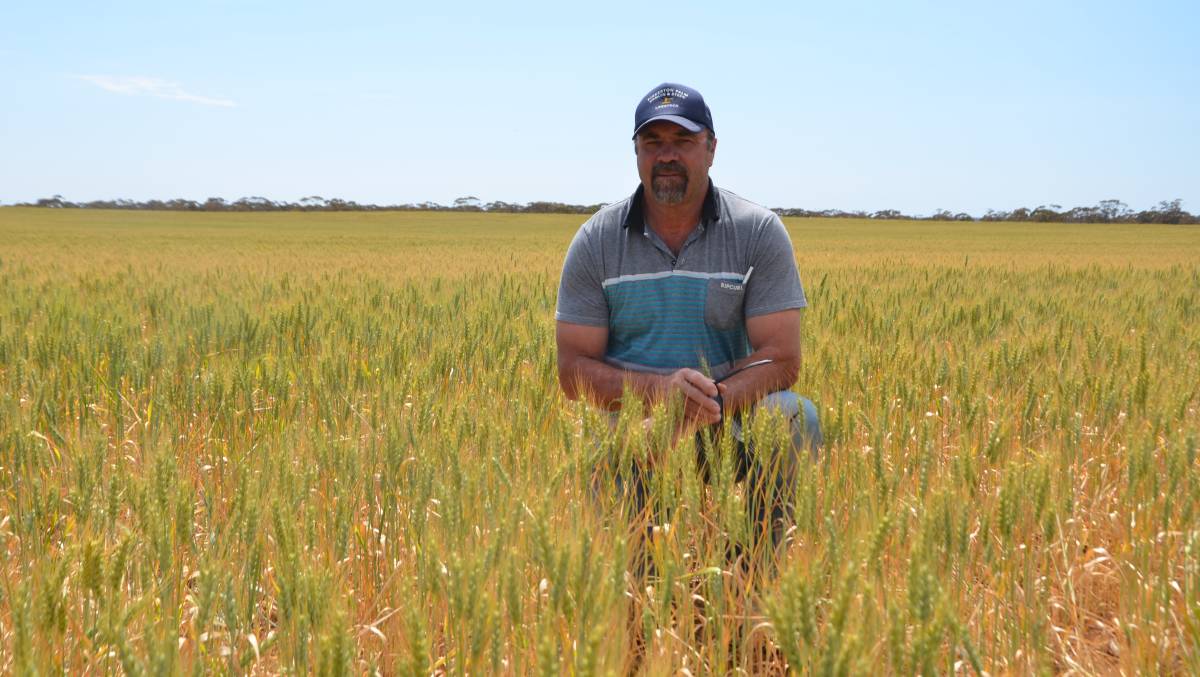 HOLDING ON: Leon Braun, Paruna, in Emu Rock wheat during the judging of the Browns Well Crop Competition. Mr Braun says wheat yields will be down, but barley should be about average.

Late rain in the Riverland region was unlikely to have a positive impact on yields in the area, but in the Southern Mallee, which received slightly more rain through the year, crops had fared better.

Rain during the first week of November was likely to "slow harvest down" in the Riverland, but the late falls were unlikely to have a positive impact on yield, according to Elders Loxton agronomist Hope Perry.

Twenty millimetres of rain fell in the Loxton region at the start of the month, and Ms Perry said while the rain could potentially help some of the later crops with grain fill, most crops were finished by the time the rain came, leading to farmers having to keep their headers out of paddocks while crops dried out.

She said this season's harvest would be "a tough one".

"A lot of the crops have suffered a lot of blows this year, with the dry season and the frost, and so yield-wise, anything will be better than nothing," she said.

Ms Perry said she wouldn't expect any croppers in the region to reap any more than a tonne a hectare for cereal crops, while pulse crops would likely yield 0.5t/ha or less.

Harvest in the area began on the last weekend of October, with it set to hit full pace in mid-November.

While frost has had a significant impact on the region's crops, Ms Perry said crops in the Loxton region were "not bulky enough" to cut for hay, but she expected croppers to still put their headers in most paddocks, including frost-damaged crops.

"Most guys will try (to put their headers in), even if they just do a few laps and see how they go," she said.

"If they don't think it's worth the fuel and the effort they might pull out, but they'll try and get something off it, especially to get their seed back for next year."

She said there were a number of pea crops in the area that had grown well and were "up pretty high", despite the season.

"You'd expect them to be down along the ground in a year like this, so for there to be pea crops up that high, that's a really good success story.

"Next year we're hoping those crops will go amazingly (if a cereal is sown), because of the nitrogen now in that paddock."

We didn't get any rain in September last year, and this year we did, which has made a big difference at the back end of this season. - AARON OAKLEY

In the Murraylands region, croppers can expect yields between 1.5t-3t/ha, according to Landmark Murray Bridge agronomist David Millan.

"Unfortunately frost has taken a bit of a shine off some of the crops, but overall they should still get close to average-type yields," he said.

He said barley crops were looking good and had "filled out quite well", slightly better than wheat.

A small number of farmers began harvesting in the last week of October, with most waiting until the first week of November to make a start, and predicted harvest to be finished between mid and late December.

He said frost damage would have a significant impact on grain quality.

"Croppers are slightly optimistic, there are varying levels of frost damage in the crops, and until farmers get their headers in, it's hard to know (the extent of the damage)," he said.

He said grain size might be "a little smaller" than last year, because of a lack of finishing rains in some areas. 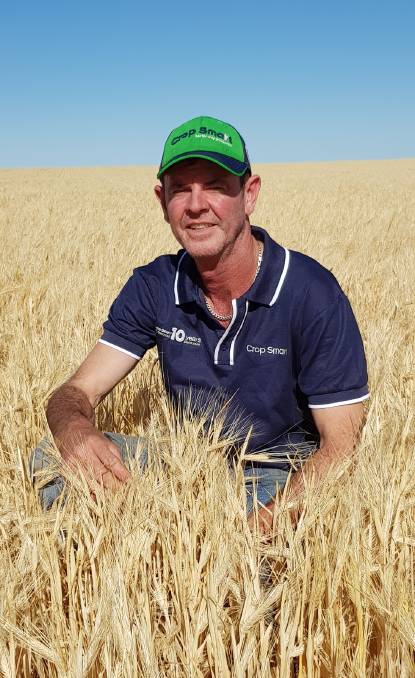 DESPITE well below-average rainfall in the southern Mallee region throughout the growing season, Crop Smart Pinnaroo's Aaron Oakley is optimistic about harvest, saying rain has fallen "at critical times to keep the crops rolling along".

He said the harvest potential for this year was better than 2018, due to the well-timed falls.

"We didn't get any rain in September last year, and this year we did, which has made a big difference at the back end of this season," he said.

Harvest kicked off in the Pinnaroo area on October 29, with the first receivals being Compass barley, while the majority of farmers began to fire up their headers in the first and second week of November.

Mr Oakley said severe frosts through the season had hit barley crops particularly hard, with wheat faring better, which is contrary to what is usually seen in the region.

This trend was also apparent in the Lameroo region, according to HF-Ag agronomist Lou Flohr.

She said barley in the area would yield from 1.5 tonnes a hectare to 1.8t/ha, while wheat would likely range from 1.8-2t/ha, with good grain quality.

"With yields being below average, we should expect to see good quality grain, pending it's not too high in the screenings from being shrivelled," she said.

Ms Flohr expected harvest in the region would begin in mid-November, and would be wrapped up by late December - slightly earlier than normal - due to many crops having already been cut down for hay.

DESPITE a tough year, with less than half the average rainfall and widespread frost, Leon Braun, Paruna, is pleasantly surprised by his crops.

"I'm very happy with what's out there for the year we've had," he said.

Up to late October, Mr Braun's property had received 120 millimetres of rain for the year, compared with an average of 275mm.

Despite a late start to the season, waiting on the break, harvest began about 10 days earlier than the usual mid-November start.

"I'm sort of hoping to get near average or just below on barley but wheat will probably be half (the average)," he said.

Off the back of another tough season in 2018, Mr Braun cut back on urea and fertiliser, and increased the barley area, which paid off after frost hit the wheat crops hard.

"We've got some paddocks with 80 per cent gone with frost - there won't even be enough to bale for hay," he said.

In recent years he has shifted to selling grain off-farm to feedlots and chicken farms.