Ewes prices peaked at a national record of $402 at Naracoorte today. 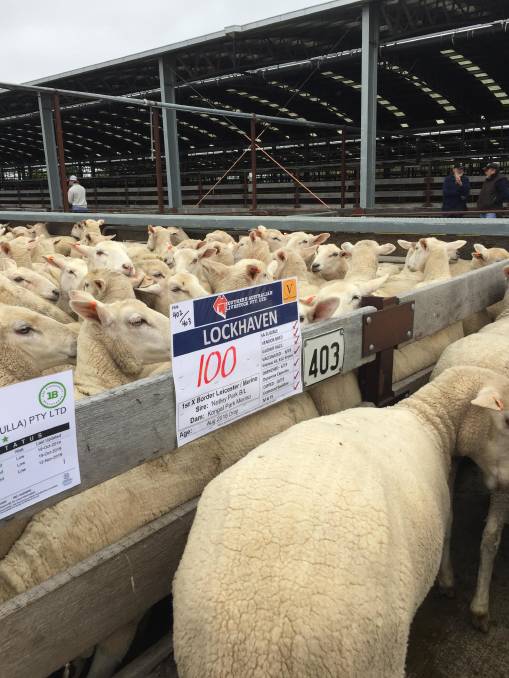 NARACOORTE continues to hold the national record for first-cross ewes, with prices peaking at $402 today.

The record fell multiple times, but it came down to the last few pens of the sale, through Southern Australian Livestock, before the $402 was hit for 100 August 2018-drops from Lockhaven, Mundulla.

The young ewes were sired by Netley Park Border Leicester rams and were out of Kongal Park Merino ewes.

The next highest price of $400 went twice.

The first pen from Peter Ireland, Deepwater Trust, Keppoch, was 201 October-shorn June/July 2018-drops by Coolawang/Paxton-blood rams and out of Gum Hill-bld ewes.

They were bought by the Skeer family, Thornlea, through PPH&S Millicent.

The second pen was sold by Scullion Farming, Hynam, which were October-shorn Cooranga-bld June/July 2018-drops.

Earlier in the sale, Elders sold three pens at $398, one to Elders Naracoorte, the second to PPH&S and the third to a Mount Gambier buyer.

This included the best presented pen from the Coolawang Border Leicester stud, Mundulla - the previous $386 national record-holder from last year's sale at Naracoorte.

Overall, 18,000 head were yarded, with Naracoorte to offer another 32,000 ewe lambs next Thursday.

The prices eclipsed the $388 first-cross 1.5-year-old ewe record set earlier in the day at Edenhope, Vic.

Those October-shorn May/June 2018-drops were from Mt Yulong, Telangatuk, Vic, while Wayne and Jill McClure, Harrow, Vic, also sold 1.5yo ewes at the sale for $382.