ONCE a dinner table staple, lamb is becoming more of a luxury item for red meat consumers as prices remain high. 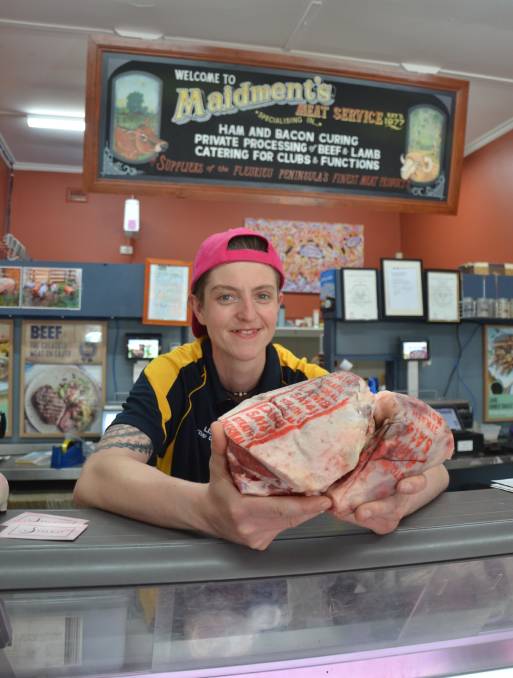 DROP OFF: Maidment's Meat Service owner Melissa Maidment has seen a significant reduction in lamb purchases at the Strathalbyn store.

ONCE a dinner table staple, lamb is becoming more of a luxury item for red meat consumers as prices remain high.

Consumers are opting for more affordable cuts, smaller portions and turning to different protein sources, according to SA butchers, who have noticed a considerable reduction in lamb purchases at their stores.

"The pullback on lamb and mutton is to be expected," he said.

"From a consumer's point of view, the price is too high. Every second or third person can't afford it.

"We were selling on average 20 lambs a week and when the price really spiked, we were down to selling two.

"It can have flow-on effects to the amount of work we have, the hours we can give our staff.

"It's good to see farmers get good money, but it can cause struggles further along the chain."

Mr Mathie said demand had risen a touch since June/July lows, with the shop back to selling 13 lambs a week - still a 35 per cent decrease on usual numbers.

He said customers had in some cases decreased the lamb quantity they were buying, opting for two chops instead of three, or turning to a different option altogether.

"Beef and chicken are still the two main protein sources people are buying at the moment because it's affordable," Mr Mathie said.

"Pork is increasing all the time, but since there has been a lot of talk about African Swine Fever, people are asking a lot of questions and are a bit hesitant."

"We're ordering about 30pc less than what we were this time last year - that's both organic and standard pasture-raised lamb," she said.

"We're getting a lot of people asking for thinner cuts as well and it does impact on what we accept from our suppliers.

"If it's over 25 kilograms it's basically too big. We like it between 18-22kg as a size range so people can still get their four chops but are paying the same amount.

"Lots of people are also edging away from boneless cuts because of the cost of boning out. They're trending towards bone-in slow cooking, charcoal cooking and smoking.

"We sell a lot of pulled lamb alternatives, like shoulder bone in, and we sell more racks than loin chops."

Ms Maidment said the reduction in lamb buying was a matter of affordability for most customers.

"For people who aren't concerned with price, they're still buying the high-end cuts - it depends on people's and families' affordability," she said.

"Also, when it comes to private processing, a lot of people are opting for standard cuts rather than value-added products like sausages, just due to costing."

"This time ten years ago we weren't selling nearly as much pork," she said.

"Beef is still a steady cut and everyone's go-to. Chicken is right up there as well."

Supporting Mr Mathie's view on price drivers were recent figures on sheepmeat exports from Meat & Livestock Australia, which showed that October sheepmeat exports were the largest for any single month on record.

There has also been a year-on-year decrease of 6.5pc to the national flock, with MLA attributing the decline to trying conditions in many key sheep-producing areas.