A MAGNIFICENT yarding of Merino ewes topped at $332 at the Keith Merino Breeders Association offshears sale on Friday, although there was a significant discount on secondary types. 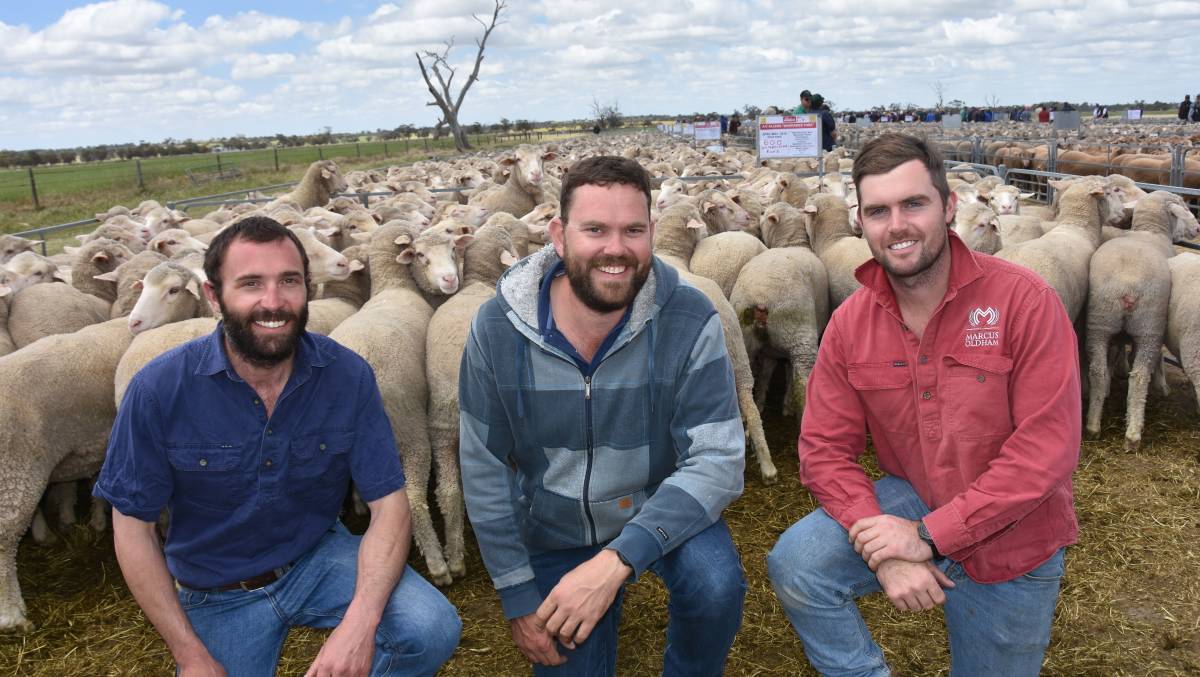 A MAGNIFICENT yarding of Merino ewes topped at $332 at the Keith Merino Breeders Association offshears sale on Friday.

It was the second highest price for Merino ewes this season in the saleyards, only surpassed by a pen of dispersal ewes at Pinnaroo offshears last month which made $342.

Pinkerton Palm Hamlyn & Steen Millicent snapped up 400 of the Moorundie bloods for Marjong Park and the Skeer family at the $332 top money.

"It was what we were hoping for and then some," Warrawee Park's Michael Allen said.

The opening pen from the Lines family's Gum Hill, Mount Bryan- the same vendors who set a $346 SA saleyard record last year- made $322.

The 236 September shorn ewes were knocked down to PPH&S's Richard Harvie buying on behalf of Deepwater Trust, Keppoch.

Warrawee Park and Gum Hill were the only two vendors to crack the $300 mark for young ewes.

The trade dominated buying on the 3369 breeding ewes.

The seconds were split two ways with PPH&S Millicent taking 150 at $165 and TFI securing the remainder for $161.

Elders Keith branch manager Steven Doecke was very proud of how all the vendors had presented their sheep despite a tough winter and said it was an outstanding yarding.

He said vendors had "mixed feelings" about the result with the top end reaching strong highs but some young ewes in the middle run a little cheaper than many expected.

"They might have been thinking $220 rather than the $210 to $200 but when you have such a great quality across the whole yarding people that were buying were able to stick to their budgets," he said.

"Sheep that could be joined straight away made good money in the high $200 range rather than those you ad to wait until November, December or January to put a ram out which sold down to $180."

Mr Doecke said it was "unfortunate" good quality older ewes were headed to the abattoir given the low flock numbers but the trade provided excellent competition.

"We knew the trade was strong at Bordertown and they said they were coming but we didn't realise they would be a strength at $200 plus," he said.

Landmark Keith livestock manager Noel Evans said it was one the best quality yarding he had seen in 42 years as an agent reaffirming the reputation the sale has built for quality.

He said it was no surprise how processors dominated the older ewes though.

"The writing was on the wall when (mutton) prices lifted to $6/kg earlier in the week," he said.

Spence Dix & Co auctioneer Luke Schreiber said prices for young ewes were about $20 off last year's values but knew well in advance the sale"wouldn't be breaking any records".

"There was not quite the demand we thought there might be two months ago but the Mallee is okay and the Upper South East is just holding on- there is certainty not anyone wishing they had an extra mob of sheep," he said.

"The secondary type ewes were probably good value but we have seen plenty of sheep making less in the last two or three weeks."

Mr Schreiber said the strength of the trade on breeding ewes would not help lack of sheep numbers but processors need them too to fill their chains and many of the top ewes had plenty of weight in them.