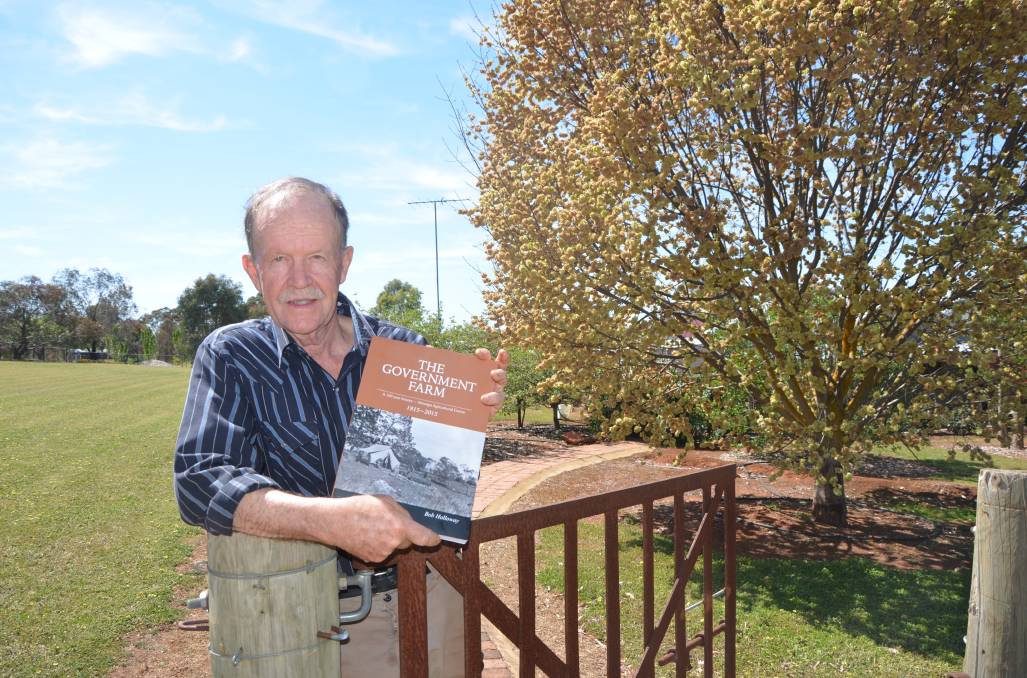 INTERESTING HISTORY: Bob Holloway was the Minnipa Ag Centre manager from 1976-2006 and has penned a book 'The Government Farm', detailing the research farm's 100-year history.

THE rich 100-plus year history of the Minnipa Agricultural Centre, with its many stories, research breakthroughs and industry contributions, is being celebrated in a book published by previous manager Bob Holloway.

THE rich 100-plus year history of the Minnipa Agricultural Centre, with its many stories, research breakthroughs and industry contributions, is being celebrated in a book published by previous manager Bob Holloway.

The Government Farm tells the tales of the experimental farm on the Eyre Peninsula, which was established by the state government in 1915 to conduct trials and demonstrations to give pioneer farming families guidance into what may or may not work in the untried environment.

In 2019, the 1200-hectare centre encompasses a farming property, a SARDI agricultural research team and the Eyre Peninsula Agricultural Research Foundation, making major contributions to the state's many low-rainfall agriculture research and development programs.

Bob managed and lived at the farm for 30 years from 1976 to 2006, after taking an interesting path to get there.

After gaining a Diploma of Agriculture Technology at Roseworthy College, Bob worked as an information officer for the Department of Agriculture in Adelaide.

An indifference to working indoors saw him move to Turretfield, working as a sheep technical officer.

He took a year off and volunteered growing chillis in the Solomon Islands in 1972, before resuming a role at Turretfield as a farm assistant and eventually moving into agronomy.

Bob's association with 'the Government Farm' began in October 1976, when he was appointed manager.

"I was only appointed in an acting capacity, with a maximum one to two years, but it turned into a long two years," Bob chuckled.

When Bob and wife Chrissie arrived in February 1977 to take up quarters in the manager's house, the centre employed seven staff and primarily focused on livestock research with some minor wheat and oat variety trials.

"I loved the independence of working there in the early days," Bob said.

"You had to make a lot of decisions yourself (due to the farm's isolation). If I was away on holidays I couldn't wait to get back to work.

"We had a commercial farm running with demonstrations on it.

"Even though the crops weren't ours and you weren't going to get paid for it, you'd still lie awake at night worrying when it was going to rain next."

In the early 1980s, the farm was home to a huge of flock of sheep that were causing erosion in the paddocks.

A limit was put on the number of sheep the farm could carry and the farm ventured down a new path focused on agronomy and finding cropping practices to suit the surrounding low-rainfall environment.

Throughout the next three decades, a number of gradual agronomy discoveries were made that have had a massive influence on today's industry practice.

"We realised that early seeding was really important, making the most use of the rainfall throughout the year and not wasting it on cultivation," Bob said.

"We had problems with minimum tillage because in those days you waited for the green to come up and then grazed it. That used moisture that I thought was valuable.

"We realised that direct drilling on the opening rain was the way to go."

The introduction of grass herbicides aided the practice and 25 years later it became standard when the price of these herbicides became more financially viable.

Another research find Bob highlighted was the better performance of liquid fertiliser mixes on calcareous soils compared with granular treatments.

"We found that on calcareous soils, phosphorus was a lot more available," he said.

"There's a lot of blokes running liquid systems on the central Eyre Peninsula - it has gradually taken off."

The countless discoveries, research projects and trials are listed in the back of The Government Farm, with Bob saying the centre has always made a big contribution to the agricultural industry.

"It was such an interesting place and has a great history," he said.

By the time Bob left the manager's role in 2006 - having also completed a master's degree in agriculture and a PhD in that time - the farm was employing close to 30 staff, a research group and many visiting staff.

While Bob continued working part time for the University of Adelaide until 2015 and achieved many other career honours - including an Order of Australia Medal for service to primary industry in 2007 - the farm has always held a special place in his heart.

He described it as a breeding ground for the agriculture research industry.

"Young people could get a role at Minnipa that they couldn't get easily anywhere else, so they did a lot of work that in other states only research officers were doing," he said.

"A lot of agronomists, advisers and technicians came out of Minnipa and had a big impact on the industry."

The researching, collating, writing and publishing of The Government Farm was an on-again, off-again six-year process that Bob described as a "nostalgic trip" down memory lane.

He is working on another book that takes a light-hearted look at the stories and people that defined the centre.