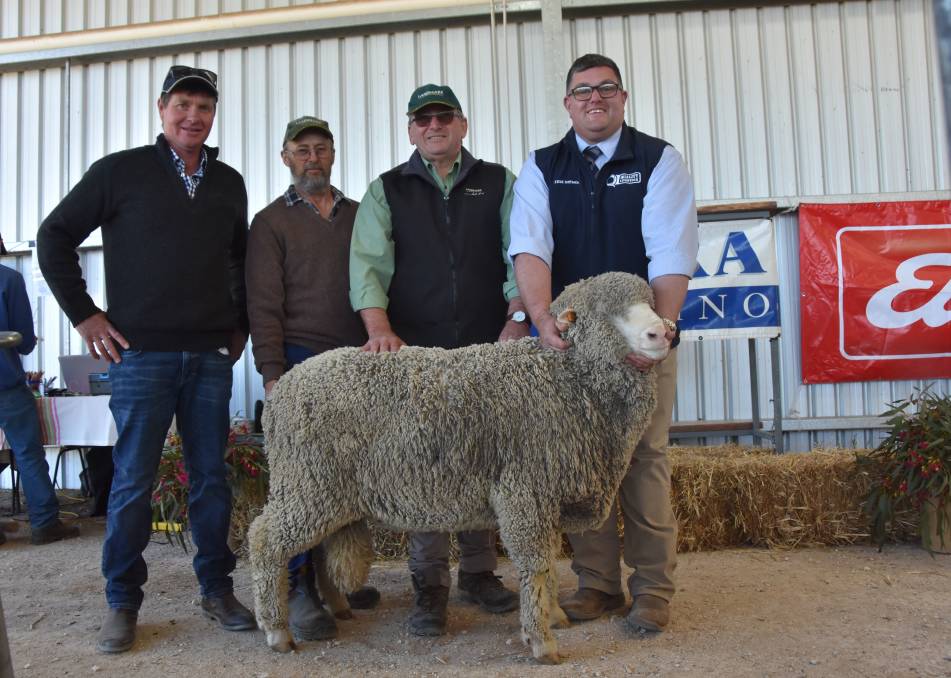 Demand was strong on the top end with six rams making $4000 or more but the orders from the 18 registered bidders, mainly repeat clients, ran out into the final stages of the sale.

"We have been using Kiandra rams for about 12 years and are finding the older rams are holding on better and the wools are staying true-to-type," Andrew Terry said.

Wheare Holdings, Goldmine Hill Farms, Lock, who bought the 2018 sale topper, was a volume buyer with eight rams for a $3875 average.

This included the $5100 second highest priced ram- sired by Willandra 160002 with a post weaning weight figure in the top 10pc of MerinoSelect at 8.6.

Going head-to-head on many of the same lots as Wheare Holdings was Karwin Nominees, Field, who bought 10 rams for a $2410 average,including the final lot at $800.

They had good carcases and wool types, backed with excellent ASBVs.

"It is the most consistent line-up I have stood over, which is a mixture of the good season but also the genetic potential of the rams being expressed," Mr Whittenbury said.

"The sheep at Kiandra are underrated but when people come and try them they are returning regularly because they perform for them."

He said the seasonal conditions and reduction in ewe numbers had impacted on the sale but the exceptional returns for meat and wool were reflected in their top end prices paid.

Mr Kluska said he was really pleased with the body weights from 110 to 115kg and progress the stud was making with its Australian Sheep Breeding Values which their clients were increasingly looking for.

"We are really commercially focussed and having our clients receive good results for their livestock is what we are aiming for," he said.

"A few more buyers would of made it a bigger day but it was really good value with rams down to $800 with great data."