A LARGE-FRAMED ram that took out top honours in the 2019 Landmark Fibre Meat Plus class at the 2019 Royal Adelaide Show has helped Mulloorie Merino and Poll Merino stud to an on-property record, fetching the top price of $7800 at the stud's 30th annual auction at Brinkworth on Monday. 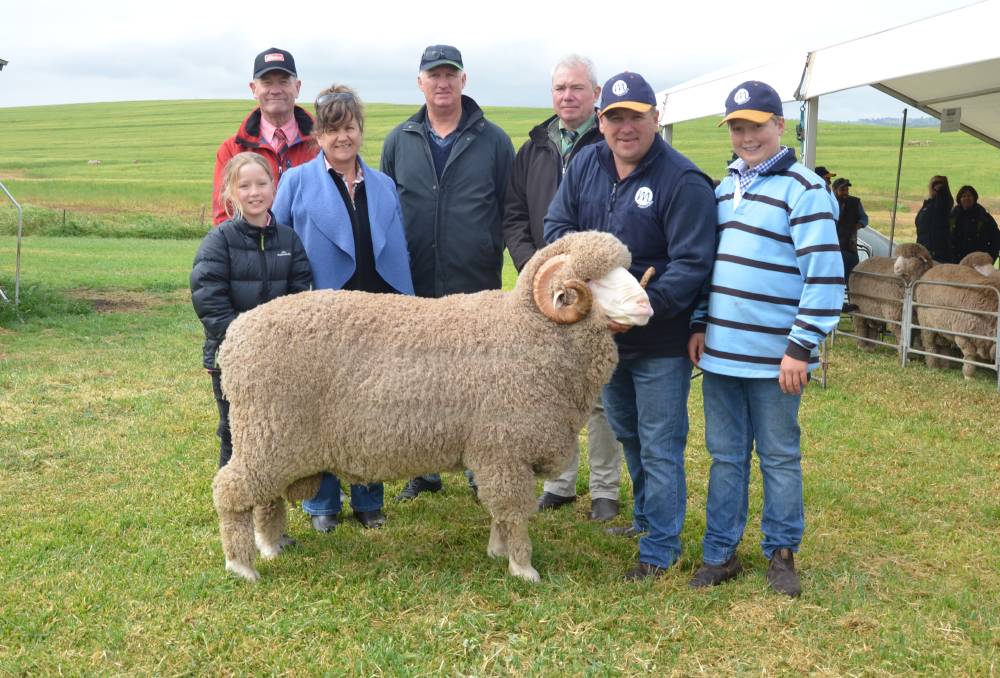 A LARGE-FRAMED ram that took out top honours in the 2019 Landmark Fibre Meat Plus class at the 2019 Royal Adelaide Show has helped Mulloorie Merino and Poll Merino stud to an on-property record, fetching the top price of $7800 at the stud's 30th annual auction at Brinkworth on Monday.

The top price was achieved by lot 11, a July-2018 drop Merino weighing 127 kilograms, with an eye muscle depth of 44 millimetres and a 7mm fat depth, and wool measuring 20.8 micron, 3 standard deviation, 14.4 coefficient of variation and 99.4 per cent comfort factor.

The ram's impressive figures attracted a fierce bidding competition, before it was eventually knocked down to NM&DS May, Three Lakes, Elliston.

The Elliston buyers have been investing in Mulloorie rams for nearly two decades, appreciating the large-frames of the stud's rams, which Mr May said "stood well and had plenty of wool", backed up by good figures.

"We can't buy sheep just on figures, we look at the sheep for a start, and then if the wool looks good, we look to see if we like the size and shape, and we look at the figures last," he said.

"It had carcase qualities through the rump and loin, objectively and subjectively it was an outstanding sheep," he said.

"What you saw on the card you saw in the pen, and that gives buyers a lot of confidence."

Mr Redden said the sale line-up consisted of "dual-purpose money-spinners", and bidders were spoilt for choice.

"Buyers could afford to be selective because of a lack of pastoral orders, and as a result, the sheep that were showing outstanding carcase and wool qualities met solid competition," he said.

The top price Poll Merino came a little later in the catalogue at lot 26, and was snapped up by long-term clients Maddern Farms, Kaniva, Vic, for $5400 - the second-highest price of the sale.

The ram was described by stud principal Paul Meyer as having good early growth.

"For 120kg and still holding its lamb's teeth, it's a great early maturer and it also has plenty of wool," he said.

Mr Meyer was happy with the sale result, considering the lack of pastoral support due to the tough season.

"We thought the sale went particularly well early on, it was a bit tougher later on, but obviously with the dry areas up north of us we expected that to be the case," he said.

He said the stud aimed to breed dual-purpose sheep, capable of "thriving in all areas", with good structure and heavy-cutting wool, sitting at about the 21M.

Active bidders were mainly long-term clients, but Mr Meyer said he was pleased to see some interest shown by new faces.

Seventeen of 20 registered buyers made purchases.

In addition to the Mays, the sale's volume buyer was Tohl Brothers, Booborowie, which took home eight rams to $1800, averaging $1050.