A new cutting-edge, mobile pest and disease surveillance unit will be launched at the Hart Field Day next Tuesday. 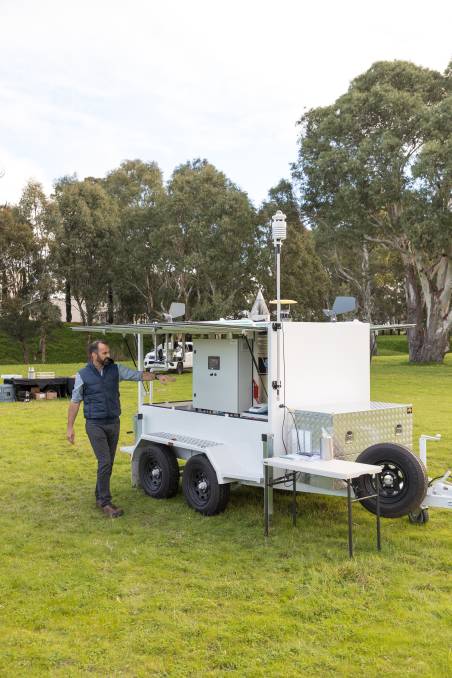 SARDI researcher Rohan Kimber with the new iMapPESTS: Sentinel Surveillance for Agriculture unit to be launched at the Hart Field Day.

A new cutting-edge, mobile pest and disease surveillance unit will be launched at the Hart Field Day next Tuesday.

Part of a $21-million federal government Department of Agriculture Rural Research and Development for Profit initiative - led by Hort Innovation, with support from 17 partner organisations across a broad range of industries from grains to viticulture, and horticulture to forestry - iMapPESTS: Sentinel Surveillance for Agriculture is the first of its kind in Australia.

Hart Field Day visitors will be the first to see the mobile pest and disease trapping and monitoring unit in action as it begins its inaugural trial at the Hart Field-Site Group cropping trial site throughout spring.

SARDI researcher Rohan Kimber said the Sentinel would provide fast-tracked, regional pest information and was the first step in developing a system that would eventually provide vital information directly to growers and consultants.

"It is a mobile trapping unit with four to five different air samplers that can sample airborne pests and diseases," he said.

"It will enable us to survey a region or a specific site and capture airborne fungal spores and insects with the capacity to also analyse specific conditions such as time, wind speed and weather.

"The iMapPESTS Sentinel is the first big step change to the way information can help pest and disease management, eventually this information will be able to be visualised to growers and consultants via a web interface and deliver real-time, actionable information to growers."

While the Sentinel unit on display at Hart is the first of its kind, Dr Kimber said eight units would eventually be deployed across Australia, and across industries.

"Hart is our first test site, partly because it is a key graingrowing region and we have had strong ties with the Hart Field-Site Group over a number of years," he said.

"It will remain on-site for the spring while we undergo the inaugural testing and iron out any bugs in the system.

"It will then move to the viticulture region of the Barossa Valley, and then we anticipate it may move to the lower northern plains of Adelaide to serve the horticulture industry, and in the meantime a second prototype will be launched in northern Qld from late December."

One of the target pests on the iMapPESTS pest and pathogen list for surveillance and diagnostics is the green peach aphid, and one of the key team members in putting together an initial proposal for the new technology, Jessica Lye from cesar will also be a key presenter at the Hart Field Day.

Redlegged earth mite is also in her sights, and she will provide field day visitors with an update on insecticide resistance, where resistant populations are found, different types of resistance, and strategies for limiting the risk of resistance evolving.

"A more recent development in SA has been the detection of several RLEM populations with extremely high resistance to pyrethroid chemicals such as bifenthrin, alpha-cypermethrin, as well as moderate resistance to organophosphates like chlorpyrifos and omethoate," Dr Lye said.

"The spread of resistance can be slowed if techniques described in the green peach aphid and RLEM resistance management strategies are applied.

"I'll be updating growers at the field day on recent prediction modelling work, that indicates which grains pests are at a high risk of evolving resistance in future." Also at the field day, communication specialist and Churchill fellow Deanna Lush, co-founder of AgCommunicators, will headline the lunchtime address.

Ms Lush is passionate about the future of Australian agriculture, and her Churchill Fellowship study tour of the United Kingdom, United States and Canada has cemented her strong advocacy for building trust in agriculture so farmers can have freedom to operate in the future.

"Farmers in the US and Canada, and the organisations which support them, have a deep understandingof the need to build trust and are actively funding and supporting work which builds trust.

"For Australia, the Australian Meat Industry Strategic Plan puts the risk into perspective when it highlights that the red meat industry stands to lose $4 billion without the support of consumers and the community - that is huge but is just for one commodity.

"When you consider all the commodities, including grain, collectively, trust is a very big risk to our agricultural industry and we have to get this right."

Ms Lush said key to building trust was first establishing shared values with the community, and then being able to tell the story of Australian agriculture not by focussing on research, but by sharing the stories of the people in the industry.

"Research by the US Center for Food Integrity has found shared values are three to five times more important to building trust than sharing facts or demonstrating technical skills or expertise," she said.

"When it comes to the provision of information in Australia, the 'science first' approach is not opening the door for us.

"We have to demonstrate that we care about the issues that are important to our community and that we are committed to transparency, sustainability and continuous improvements in all aspects of our farming systems.

"Where in the past we might have relied on research findings to get the message across, the shared values approach is demanding us to establish that shared value first, making a point of connection and opening the door to establish the relationship and then talking about the science behind what we do."