A long-bodied, strong wool Poll Merino from Old Ashrose, Hallett, edged out the competition in the August-shorn classes to win grand champion ram for its wool cutting ability and sire appeal. 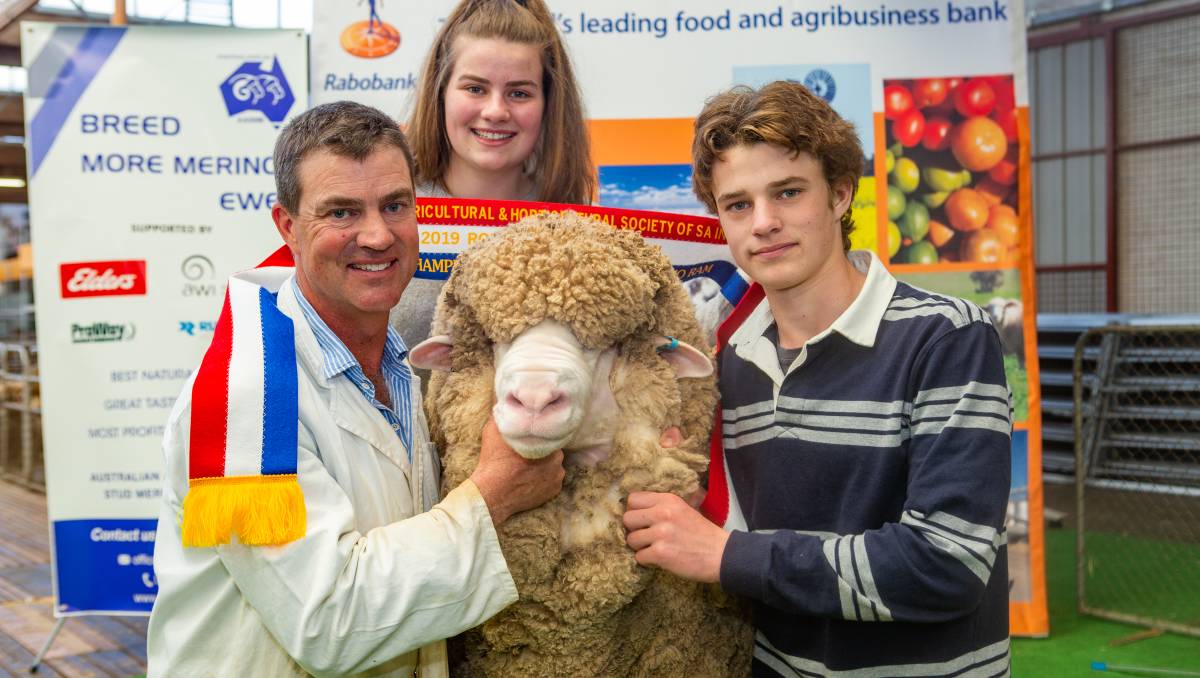 A long-bodied, strong wool Poll Merino from Old Ashrose, Hallett, edged out the competition in the August-shorn classes to win grand champion ram for its wool cutting ability and sire appeal.

Old Ashrose's Nick and Kate Wadlow and family were thrilled to gain their second grand champion Poll Merino title in four years with the ram, which weighed 152 kilograms.

The 20.8 micron ram PMA 242, which was sired by Moorundie Park A321, had earlier success as the champion strong wool ram at the recent Crystal Brook Show.

"The (Tamaleuca ram) has immaculate fine wool and carries it all underneath with a great make and shape, but it came down to the sheer volume, weight and depth of body of the strong wool," Mr Hogg said. "It has a beautiful brisket and big sirey head."

Also in contention was another massive ram - the medium wool champion exhibited by Heather and John Dalla, Orrie Cowie, Warooka.

Mr Dalla said they were retaining Monarch 64 - the supreme Poll Merino from the Royal Canberra Show earlier in the year - which weighed nearly 180kg.

"It would be the biggest (Poll Merino) we have had, especially at 19.5M, and to have that wool quality and cut is a rare combination," he said.

The Michael family, Nyowee stud, Balaklava, had two champions in the final ewe line-up, but it was the 20.4M medium wool from the Sullivan family's Greenfields stud, Hallett, that won the day.

Mr Wallis described it as a "beautiful, white woolled ewe with plenty of staple length and a huge barrel".

The ewe was in the winning pair at the Elders SA Stud Merino Expo at Burra in March, which then represented SA at the Australian Sheep & Wool Show in Bendigo, Vic, in July.

A ewe from the Brooks family's East Bungaree stud, Hallett, which was reserve champion medium wool ewe was elevated to reserve grand champion.

The AI-bred daughter of Imperial 22 was the grand champion ewe at the Crystal Brook Show.