A very correct, upstanding Merino ram from the Meyer family's Mulloorie stud, Brinkworth and Tintinara, scored the top spot in the Fibre Meat Plus class. 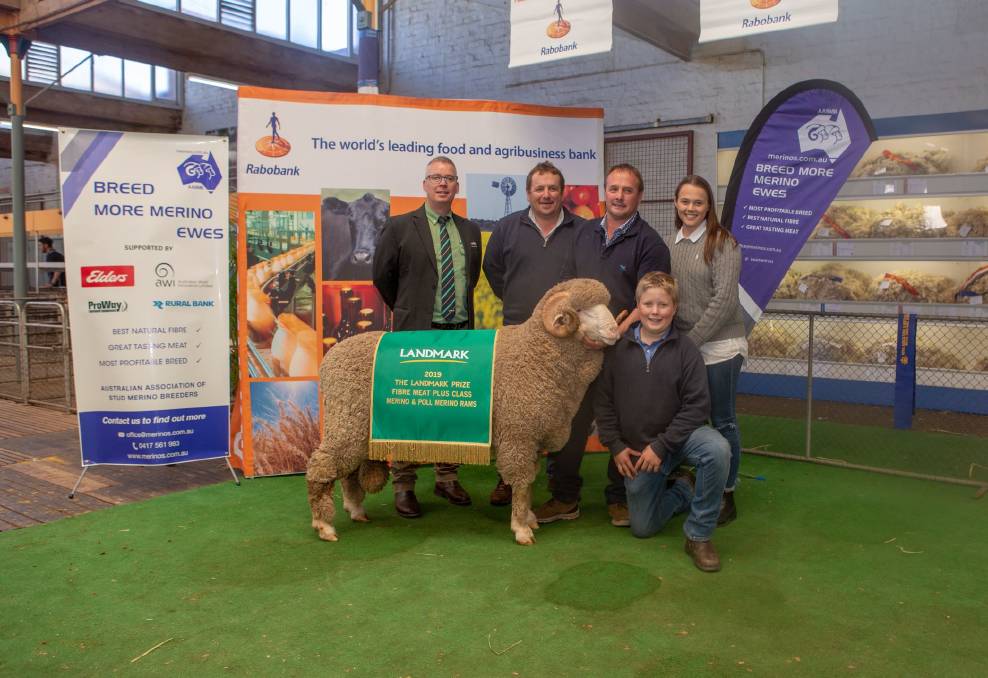 A very correct, upstanding Merino ram from the Meyer family's Mulloorie stud, Brinkworth and Tintinara, scored the top spot in the Fibre Meat Plus class.

The largest class in the stud Merino classes at Adelaide aims to identify sires with superior meat and wool traits and is judged on wool and carcase figures,as well as visual appraisal.

The 20.8 micron ram which weighed a massive 125 kilograms also had the equal highest eye muscle depth in the class at 44 millimetres.

Its wool tests included a 3.0 standard deviation, 14.4 coefficient of variation and 99.4 per cent comfort factor.

The ram which scored 82.03 points from a possible 100 be offered at Mulloorie's annual on-property sale on September.

Paul Meyer said the ram had been a standout.

"It has great character in its wool and carries it well down and is very good on its feet and very square behind with good length of body," he said.

Sired by Mullloorie 2, the ram was third in its big class during March-shorn judging.

Mulloorie's last Fibre Meat Plus win was in 2008.

In second place was the Koch family, Bunyara stud, Moculta with their ram,Bunyara NY009 which scored 81.1 points.

Wool judge Brad Schroeder, Gunallo stud, Pinnaroo, was impressed by the wool quality with only a few points separating the top and bottom rams.

"There were quite a few different wool types across the class but for their types were very good with crimp definition and whiteness of the wools," he said.

"If they were lacking in (wool) length they made up for it in density or the other way around."

Meat judge Mark Grossman, Koonawarra stud, Angaston, said the top rams in the class had great fleshing and length of loin but there was some variation across the class in structural correctness.

"A couple of the top rams which placed had the biggest length of loin,it was good to see those carcase rams come through in the placings," Mr Grossman said.

"The Merino breed is going really well in its dual purpose focus giving opportunities forging ahead."

The 2018 Merino Sheep Young Judges state winner Cody Jones, Booborowie, got in some practice ahead of the national finals at the Royal Perth Show as the associate judge.

THREE young rams all by different WA sires came up trumps for Mallee stud, Kamora Park, in the Fibre Meat Plus class, ensuring the stud claimed the aggregate trophy for the fourth time.

The Sandalwood based stud had the highest scoring group of three rams in the class highlighting the consistency of their sheep.

"We love the class because it highlights the two things we are trying to produce, meat and wool- we want rich crimpy wools but we love the huge, long bodied barrelled carcases," Kamora Park's Colin Boughen said.

Both the third and fifth placed rams sold at the Adelaide ram sale.

The other ram by East Mundulla 22 has been retained in the stud.

Two of Kamora Park's rams were also in the final six in the All purpose class at the Australian Sheep & Wool Show, Bendigo, Vic.