This year's Shorthorn supreme exhibit caught the eye of judge Trent Johnstone from the get-go. 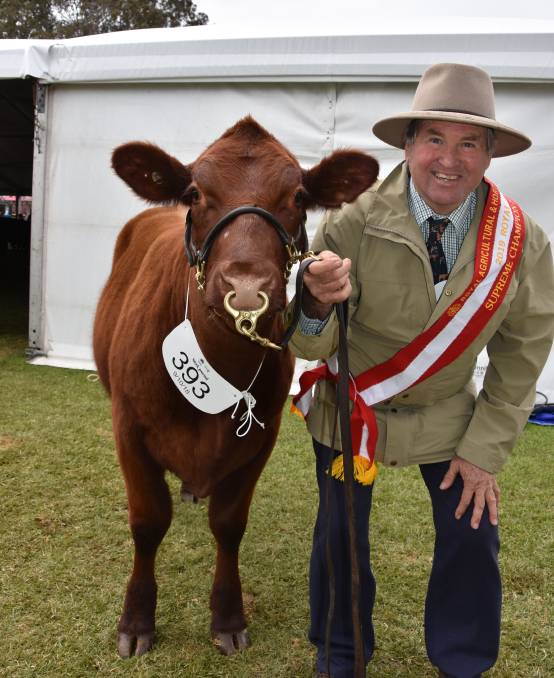 THE supreme exhibit in this year's Shorthorn judging entered the ring in the very first class, catching the eye of judge Trent Johnstone, Trojan Shorthorns, Lyndhurst, NSW, from the get-go.

Belmore Bella P392 from Andy and Sally Withers' Belmore stud, Naracoorte, was a 10-month-old heifer by Marschay Jurggernaut J57, and won junior and grand champion female on its way to the supreme ribbon.

"It's got plenty of power and capacity and plenty of growth-for-age, a heifer I really admire, as it stands there it has got that real outlook about it, a real presence," Mr Johnstone said.

"You get in behind it and there is a power of meat there in that hindquarter, but it also carries that natural thickness right up over the topline where those expensive cuts are."

Mr Withers said it was extraordinary to win supreme with such a young animal, but he had achieved the feat once before.

"Many years ago we did it with a daughter of Armstrong Major League, a bull we bought the semen rights for after it won in Denver (National Western Stock Show) in the United States - and this heifer is actually very similar," he said.

"It's just so well-balanced, it's wide, soft, wonderful front, very sound, very correct on legs and feet, and so deep."

Belmore then went on to be named most successful Shorthorn exhibitor.

"It's got a tremendous set of testicles on this bull for a bull of this age ... a very complete bull with that big, strong sire's head on it," he said.

Mr Thompson said Wallaby was the first progeny of Nagol Park ELMT Logo L227, a bull he bought at the National Shorthorn Show and Sale in Dubbo, NSW, two years ago.

Bayview also won the supermarket and EU performance classes, which are judged on Breedplan performance, visual market suitability and structure.

Sponsored by
South Australia can expect a standard start to an average fire season.
Test
Five new national parks have been officially proclaimed across SA in the past week, including Australia's largest national park.
Test
"IT was my passion and I never wanted to be the age I am now and wonder 'what if?'," says Bob Magor.
Test
IT'S official - La Nina has arrived.
Test
Northern Adelaide Plains farmers dealing with the impact of recent hailstorms have more support available.
Test
MILK production figures have fluctuated recently but industry insiders are tipping modest growth in the state milk pool for the remainder of the year.
Test
WOOL growing is the prime focus for a West Coast sheep operation and to cement it long-term, a producer has set up a breeding program to ensure it remains sustainable.
Test
What impact is La Nina going to have for you? POLL
Test