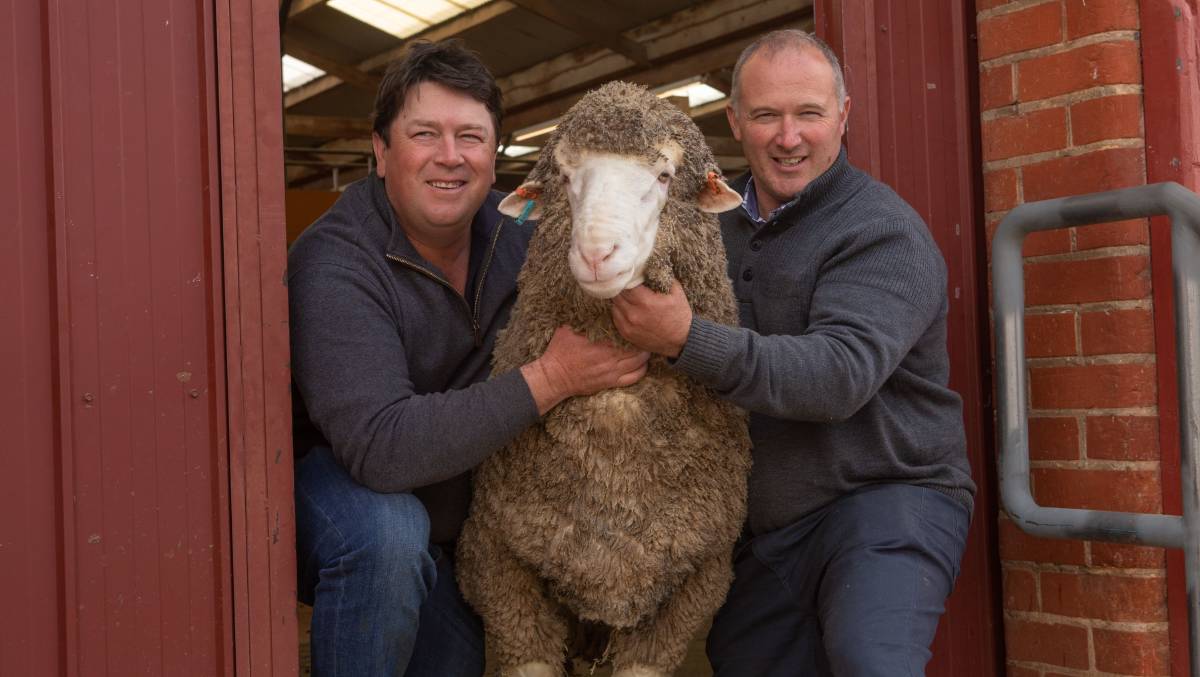 The ram was aptly named 'Smithy', after the Australian cricketer Steve Smith who also cracked a ton last week.

More than doubling last year's top price, it was the best money seen at the prestigious multi-vendor sale, held in conjunction with the Royal Adelaide Show, in 30 years, and the highest price paid for a Merino ram across Australia in 2019.

Ironically it was Elders auctioneer Tony Wetherall ,who was adding up the bids for Glenlea Park 180173 from the opening bid of $30,000.

He also sold the $450,000 record-breaking ram from Collinsville stud at the Adelaide sale in 1989.

Buyer Will Lynch, Boorana stud, Woorndoo, Vic, was bowled over by the 119.5 kilograms ram's wool quality and structure, along with the chance to introduce a new family to his stud.

He has previously had plenty of success with Glenlea Park bloodlines.

"Quite a few sheep have unbelievable structure but not the best wool or vice versa but he ticked both boxes," Mr Lynch said.

"He has a great shape, great structure, good constitution and great through the back end with a really high quality wool."

The 20.8 micron ram offered by Peter and Marianne Wallis was sired by GP881 and grandson of Moorundie Park 306 'Kelvinator', which sold at the Adelaide sale a few years ago for $53,000.

Obviously the price is absolutely fantastic but what is more satisfying is the validation a sale like that gives you as a breeder, suggesting that you are breeding a highly desirable type. - Peter Wallis, Glenlea Park, Pinnaroo

Mr Wallis said he was "blown away" with the result for the ram he believes is the best he has ever bred.

"Obviously the price is absolutely fantastic but what is more satisfying is the validation a sale like that gives you as a breeder, suggesting that you are breeding a highly desirable type," he said.

"Half way through the year I thought that is a wool that is not often seen in the industry on a frame that is pretty correct so he had a lot going for him."

Mr Wetherall said it was a pleasant surprise to hit such spectacular heights but a reflection of the confidence in the industry and desire by stud breeders to invest in top genetics.

"When you have two or three fellas who are prepared to syndicate it is not hard to make $100,000, who knows next year maybe it may be a bit more" he said.

Pushing Boorana all the way was a WA stud syndicate, including Pyramid Poll, Esperance, who outlaid $34,000 for another Glenlea Park ram two lots later. 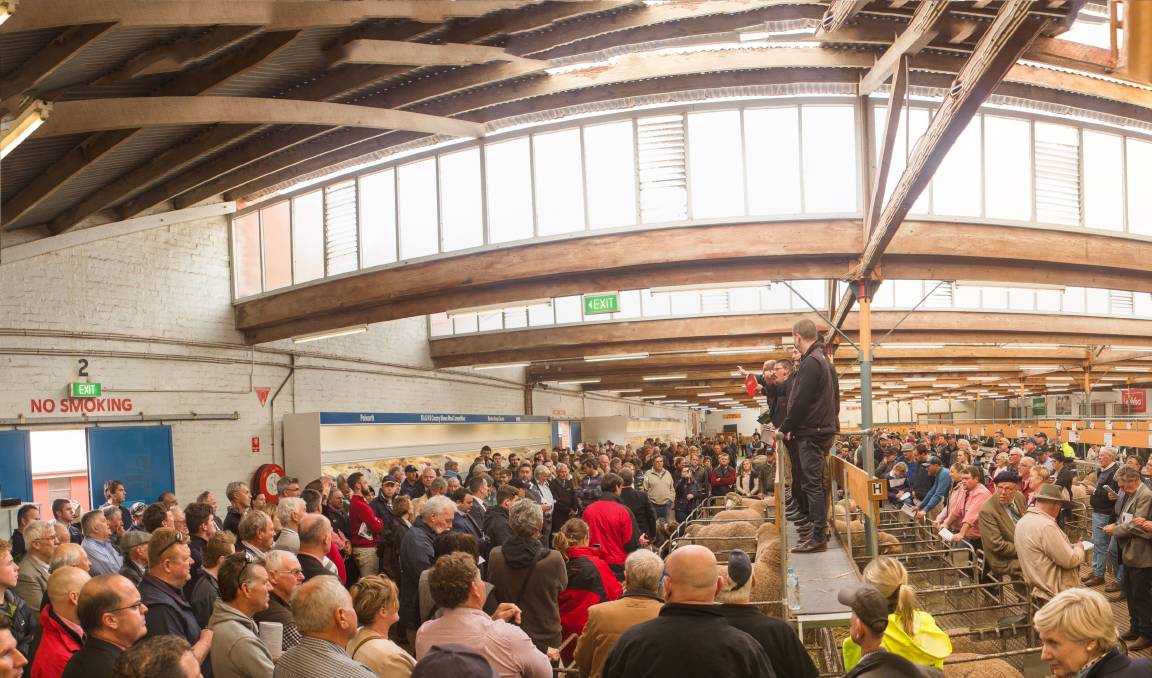 PREMIER SALE: A huge crowd of more than 120 registered bidders converged on the Adelaide Merino ram sale to witness some spectacular highs.

Bids flew from the first lot, with Collinsville 180641 knocked down for $72,500 to NSW stud breeders Richard Chalker, Lach River, with a share sold to Warrick Kopp, Towalba.

They had been following the ram since it was the grand champion March shorn ram at the Hay Sheep & Wool Show in June.

"We have been following it since Hay (Merino Sheep Show, NSW), for our stud it offers great structure, size and outlook," Mr Chalker said.

Another bidding war ensued for lot 2, an Imperial 111 son, before it was knocked down to the Eaton family, Olinda stud, Wyalkatchem, WA, for $62,000.

Olinda has been on Collinsville bloodlines for more than 40 years.

"We came to Adelaide to buy a ram and it was our first pick. It has very good wool and is a well-made sheep," Olinda stud principal Brad Eaton said.

The three sensational highs helped lift the average by more than $500 on 2018, but there were fewer rams in the $15,000-plus price bracket than last year.

This was likely a reflection of the continued widespread drought across much of Australia and a noticeable absence of international buyers. 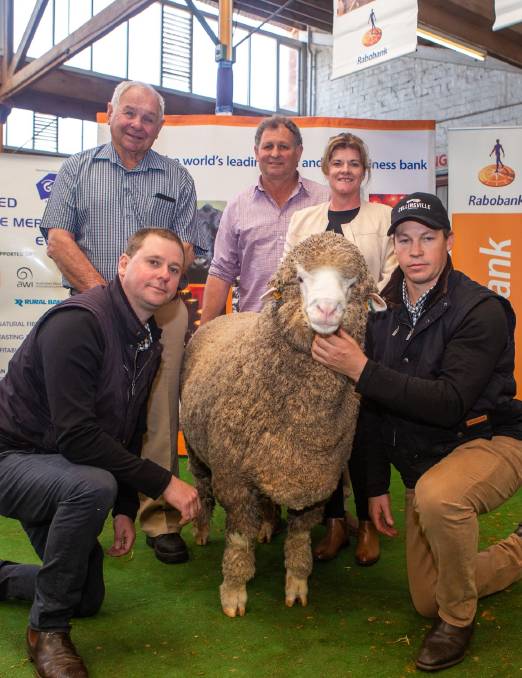 For the second consecutive year, George and Sophie Millington, Collinsville, Hallett, topped the averages at the Adelaide Stud Merino and Poll Merino Sale.

Their five rams averaged $35,300, cementing their pole position in the highly-regarded sale.

"It is very pleasing that we can have that consistency at the top - the prices show we must be doing something right with the demand for our genetics from stud breeders from across Australia," general manager Tim Dalla said.

Not far behind though was Peter and Marianne Wallis, Glenlea Park stud, Pinnaroo, who more than doubled their 2018 average, assisted by the $100,000 sale-topping ram.

Adelaide remains the best Merino sale in the world, with the average price going up every year. - Merino SA president Nick Wadlow

"There is a lot of confidence in the industry, the buzz was amazing in the crowd at the start of the sale and there were a lot of studs looking for quality genetics," he said.

"Adelaide remains the best Merino sale in the world, with the average price going up every year." 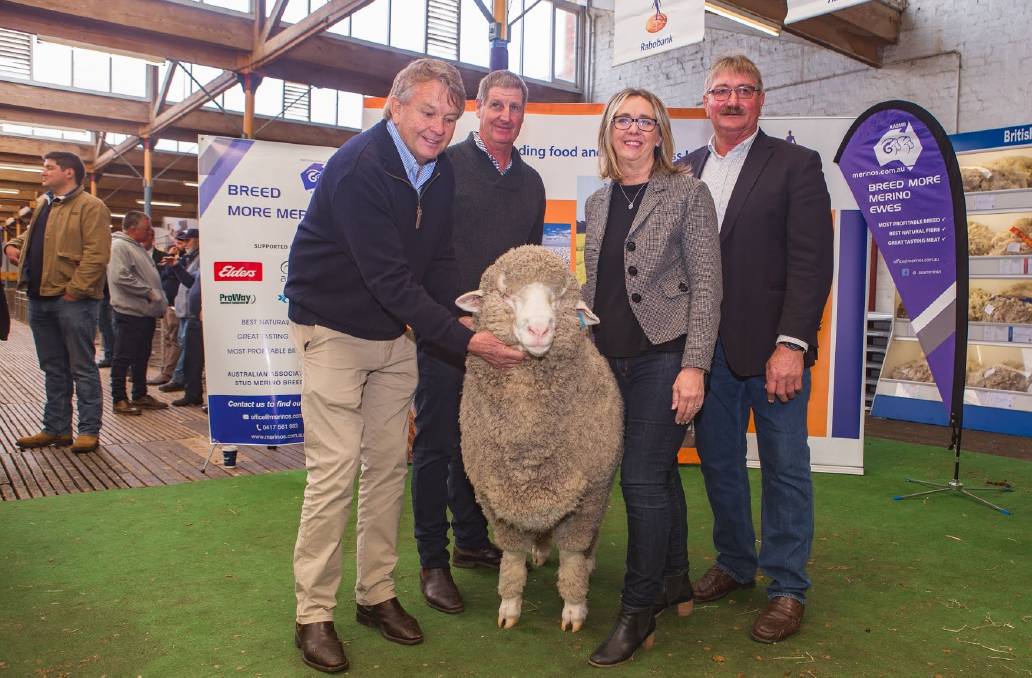 OFFERINGS at the Adelaide Ram Sale sold to four states of Australia, but local SA studs were in the thick of the fast-paced bidding.

Heather and John Dalla, Orrie Cowie, Warooka, sold the $30,000 highest price ram to remain in SA, with the second-to-last lot in the sale knocked down to fellow Warooka breeders Garry and Joe Murdoch, North Cowie.

A semen share in the 20.9M ram sold to North Cowie.

The 136-kilogram Moorundie ram cut 10.4kg of wool with 6.5 months growth and already had lambs on the ground at both Moorundie and Poll Boonoke in NSW.

The top ram from the Sullivan family's Greenfields stud, Hallett, made $18,000 to the England family, The Snuggery, Kingston SE.

Four other vendors sold rams to a $16,000 high, including the Vandeleur family's Rices Creek stud, Saddleworth and Tintinara, which sold lot 51 - a 21.7M ram - to Millbrae stud, Kimba.