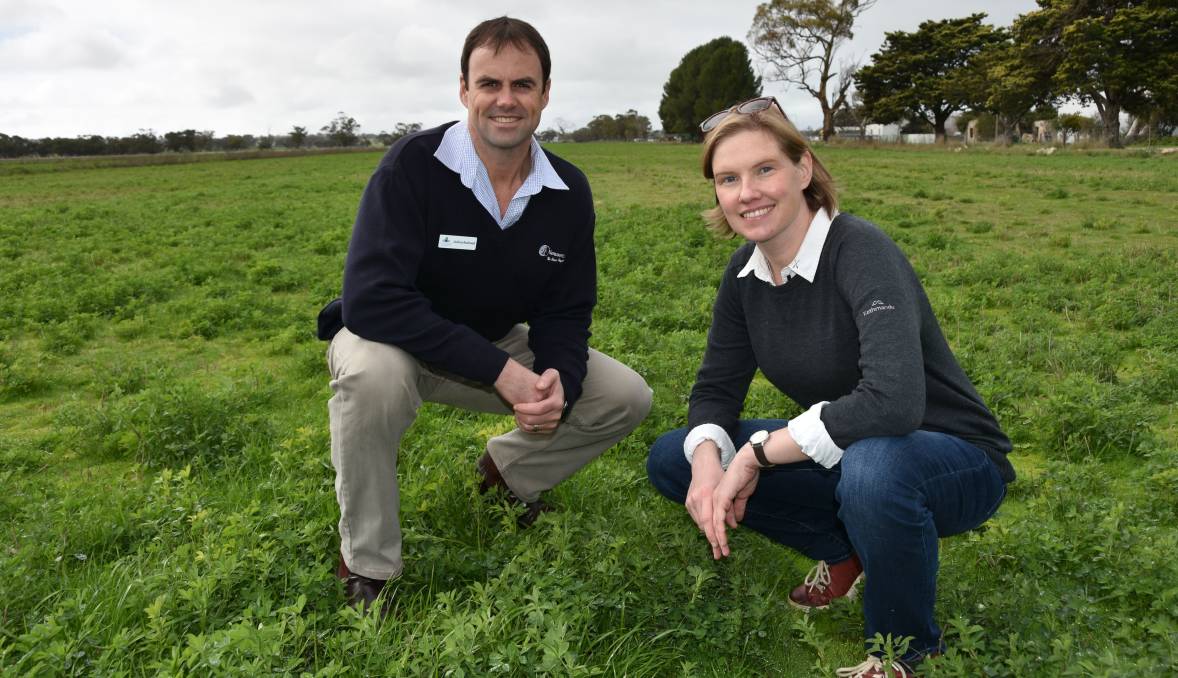 Lucerne seed wasp is an economic threat to the industry, reducing yields by up to 80 per cent, but new research shows 'bee bombs' might help limit losses.

Lucerne seed wasp is an economic threat to the industry, reducing yields by up to 80 per cent, especially in years with warm, dry winters.

But NSW Department of Primary Industries entomologist Ainsley Seago has uncovered some promising ideas to tackle the pest based on previous studies and also an enhanced understanding of the life cycle of the wasp and how it behaves through glasshouse and field trials.

Last month, the Orange, NSW-based researcher presented her findings at a Lucerne Australia meeting in Keith - the body which obtained nearly $90,000 in funding from the Rural Industries Research and Development Corporation for the three-year project.

The wasp causes damage by laying its eggs in the developing seed pods, preventing the seed from maturing.

It results in high seed clean out rates, which occurred in the 2014-15 season.

Native bees have a reputation of not being that effective pollinators, but it may be that we can encourage them in high enough numbers to make a difference. - AINSLEY SEAGO

In her studies, Dr Seago confirmed there was only a narrow window for the wasp to successfully lay eggs in the seed pod, eight to 10 days post pollination.

She says Australian growers may therefore be able to adopt a similar management strategy to the United States, which undertakes a forage cut to synchronise the flowering of its crops.

It then "bee bombs" the paddock with leaf cutter bees at flowering to ensure a very short pollination.

A couple of days later an insecticide is applied, killing the leaf cutter bees, but also lucerne seed wasp.

"When you do that, you really interfere with their (seed wasp) life cycle and it stops them from building up to catastrophic numbers," she said.

"This has resulted in 90 per cent less wasp damage in lucerne seed."

Dr Seago says Australian growers may not have access to leaf cutter bees, but research from the 1950s and 1960s had shown several native bee species may be useful as pollination boosters.

"Native bees have a reputation of not being that effective pollinators, but it may be that we can encourage them in high enough numbers to make a difference," she said.

The US technique of flood irrigating the stand post-harvest for sanitation may also be effective in helping Australian growers reduce overwintering numbers.

Dr Seago said it was also relatively straightforward to develop a soil PCR test for the presence or absence of the wasp, similar to one used for phylloxera in the grape industry, but says it may not be that useful, with lucerne wasp DNA nearly always present in soil wherever lucerne is grown.

A soil test predicting numbers of live seed wasps would be far more beneficial but also challenging to separate post-harvest seed from soil and distinguish parasitoids from lucerne seed wasps in any count.

No 'silver bullet' for keeping pest at bay

THE early and uniform lock-up of lucerne stands in mid-November to early December remains the best strategy to reduce seed wasp impact, along with good on-farm hygiene and managing nearby lucerne stands to avoid them flowering if possible.

Mr Hutchings said LA was yet to see the final report from Dr Seago, but from her presentation, it appeared there were no "silver bullets" to tackling the pest.

But the research had provided some great avenues for further investigation.

"Glasshouse trials have shown that the wasp only deposits larvae in pods that are about eight to 11 days old, after which the pods have hardened enough to stop further egg laying, so this information may help target potential treatments in the future," he said.

"The project also suggests that the seed wasp can breed at an extremely fast rate and even if a small population survives the winter, numbers can still boom if perfect conditions occur."

Mr Hutchings sees further areas to investigate such as the potential in breeding parasitoids to be released in conjunction with initial seed wasp hatchings from overwintering pods to hold seed wasp populations, the potential use of pest oils for control - such as is used to treat gall wasps in citrus - and possible transgenic means of control.

LA is also keen to continue working on a soil test that can be an indicator of overwintering wasp numbers.

Sponsored by
Extra heavy export lambs were firm to $10 cheaper at the Ouyen Livestock Exchange in Vic today, while heavy trade and trade lambs were $5-$8 dearer.
Test
THE next round of the state government's Regional Growth Fund is open for applications.
Test
Pastoralists are being encouraged to trial new management practices and technologies through new government grants.
Test
A SPECIALTY SA wool sale held by online platform WoolQ for the first time last week, has helped local growers showcase their product to a global audience and gain solid returns.
Test
Maintaining access into overseas markets during fruit fly outbreaks was a key theme of the recent National Fruit Fly Symposium, held online from Tuesday to Thursday last week.
Test
An irrigation block, strategically located mid way between Melbourne and Adelaide, and just 12 kilometres south of the Western Highway at Kanva.
Test
ROTATIONAL and agronomic benefits, including increased ryegrass control, are being predicted as growers plant the first paddocks of genetically-modified canola since SA's 16-year moratorium on GM crops ended last year.
Test
RMAC calls for government to stop commercial dealings with those who won't finance law-abiding businesses.
Test