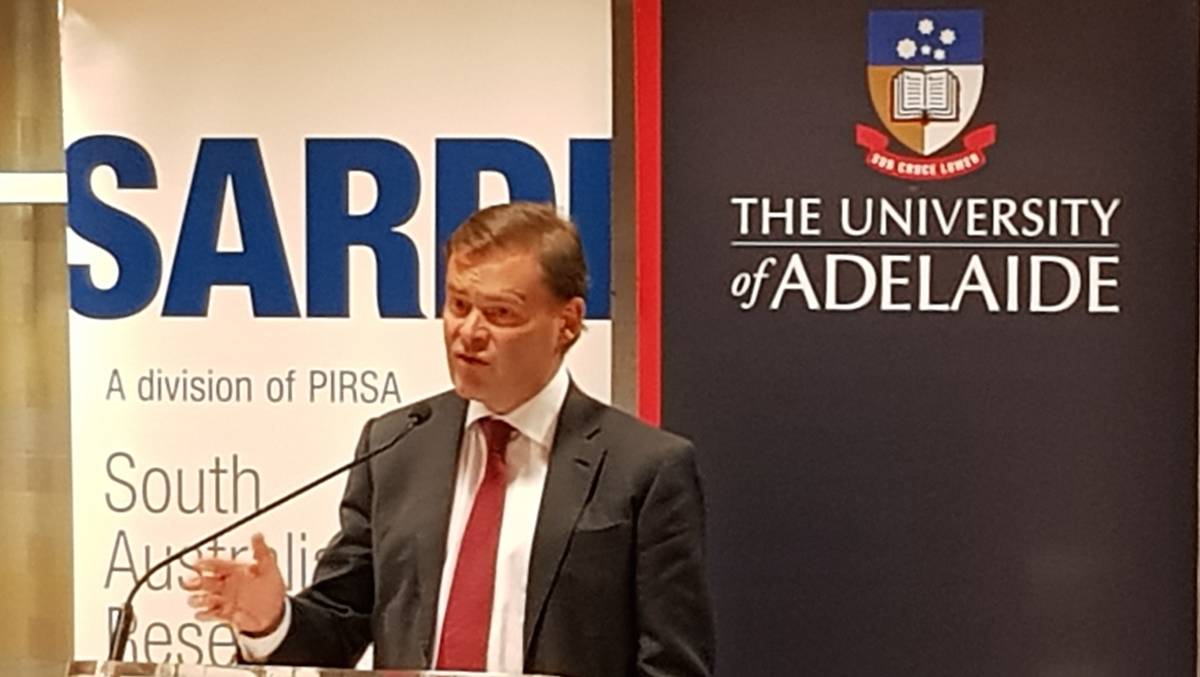 SA could move into position as a global leader in dryland agriculture, following a partnership between the state government and the University of Adelaide.

SA could move into position as a global leader in dryland agriculture, following a partnership between the state government and the University of Adelaide.

The collaboration will give University of Adelaide scientists access to five state-owned research farms and will bring a diverse range of academic knowledge to the agricultural sector in fields, such as mathematics, engineering and machine learning for the application of new technologies.

Two of the farms will be also used to trial new Ag Tech inventions and demonstrate them to farmers to encourage early adoption.

PIRSA and its research division SARDI already have a long history of working with the University of Adelaide.

The new partnership is designed to reduce red tape, encourage multi-disciplinary research and bridge the gap between academia and applied research to generate high-value outcomes and export opportunities.

Initial research partnerships include a five-year, multi-partner $4.5 million viticulture research project to understand the drivers of terroir in the Barossa Valley, and a project developing herbicide-tolerant faba beans.

But University of Adelaide Vice Chancellor Peter Rathjen said the collaboration's greatest opportunity was in further developing the state's expertise in dryland agriculture.

This will potentially replace a system that only assessed these regions once every seven years.

Professor Rathjen said the university's Roseworthy and Waite campuses already had a global reputation in the areas of cereal breeding and genomics, winemaking and viticulture and animal sciences and production.

"We think we have an opportunity to build on that brand that is Waite and Roseworthy to carve out a place in the world of dryland agriculture to be truly global leaders in this space," he said.

"But to be globally competitive in the first instance we need to be able to operate at scale.

"We need to be able to assemble cross-disciplinary teams that make available the breadth of skills needed to provide meaningful solutions - not just agriculture but agriculture married with engineering, with artificial intelligence, data science, business, economics, environmental management.

"Scale will also give us the opportunity to bring together more meaningfully the research we do with the training of the next generation ... training a generation that will implement the solutions that we discover."

Agriculture is SA's largest industry, contributing almost $20 billion to the state's economy and supporting 152,000 jobs in the 2017-18 financial year.

The state's premium food and wine is exported across the world. But SA is the driest state in Australia, the driest inhabited continent on Earth

The University of Adelaide led a delegation to Morocco in June, meeting with government Ministers, agencies, research institutes and universities.

This included a visit to the International Center for Agricultural Research in the Dry Areas, which has implemented research-for-development programs in 50 countries across the world's dry areas - from Morocco in North Africa to Bangladesh in South Asia.

But to be globally competitive in the first instance we need to be able to operate at scale. - PETER RATHJEN

"So we want to not just produce food for consumption and export, as important as that might be, we want to produce knowledge in sustainable cereal production, water management, dryland farming systems and to do that by bringing to these pressing global problems new technologies and new collaborations," he said.

"Dryland agriculture can be big for the university and for the state but it will require partnerships and today's launch is the start of that journey."

PIRSA and SARDI have been co-located at the University of Adelaide's Waite Campus for 25 years, along with many other nationally significant research organisations including CSIRO, Australian Grain Technologies and The Australian Wine Research Institute.

The campus has the largest concentration of research expertise in the Southern Hemisphere in plant, food and agricultural sciences.

Premier Steven Marshall said the agreement united the ambitions and strategies of two of the state's major primary industry research institutions to benefit the entire country.

"Technology is changing so rapidly at the moment and our growing agriculture industries are adapting to these new technologies, which include artificial intelligence, machine learning, the Internet of Things and satellite technology," he said.

"We envisage this partnership will drive even greater research investment into our already world-leading facilities and will strengthen the intellectual networks and the research capability of the university, PIRSA and SARDI and enhance SA's already strong reputation for quality science and technology."

Speaking at the Growing the Future event later that day, Member for Flinders Peter Treloar said for 150 years, SA was a world leader in agricultural innovation, but that mantle had slipped in recent years.

He said in the 1960-70s, research facilities at Minnipa and Waite were driving innovation in dryland farming technology and exporting that to the world.

"The opportunity is there to become that (leader) again," he said.

SARDI executive director Peter Appleford said PIRSA's researchers across the state would benefit from the leverage the partnership offered.

"Our focus is on delivering innovative world-leading applied research so SA's primary industries can be internationally competitive, and working together with the university can only enhance our capability in this space," he said.

This story was originally published on The Lead.

Sponsored by
THE Country Fire Service is expected this to be a somewhat more "standard" fire season than those of the past year, as it announces the starting dates for the Fire Danger Seasons for all SA districts.
Test
PLATEAUING lamb prices at saleyards in the past three weeks have recovered at Dublin market this week, after a large line of lambs reached $222, offering producers renewed confidence for the markets ahead.
Test
Stock Journal looks back to June 1996, when thousands turned out in Adelaide to rally against new gun laws, SA beef studs performed well at the Dubbo Shorthorn Sale, and many were still waiting for rain before getting stuck into seeding programs.
Test
About 25 members of SA's agricultural industry met in Adelaide on Wednesday for the the announcement of the national winner of the 2020 AgriFutures Rural Women's Award.
Test
THE call is out for mentors and mentees to help prepare regional Australia against future drought events in the second round of the Drought Resilience Leaders Mentoring Program.
Test
Australia's wine exports have dropped to their lowest levels in five years with the industry still reeling from China's announcement in March that it would extend its 220 per cent tariffs for the next five years.
Test
A milestone year for the Brown's Well Crop Competition was met with much enthusiasm, with about 50 Mallee croppers and industry members turning up for Tuesday's event which in its 50th year.
Test
The 2021 Australian Young Farmer Challenge National Final is set to be delivered in a whole new virtual world tonight, October 21 at 7:30PM (ACST).
Test