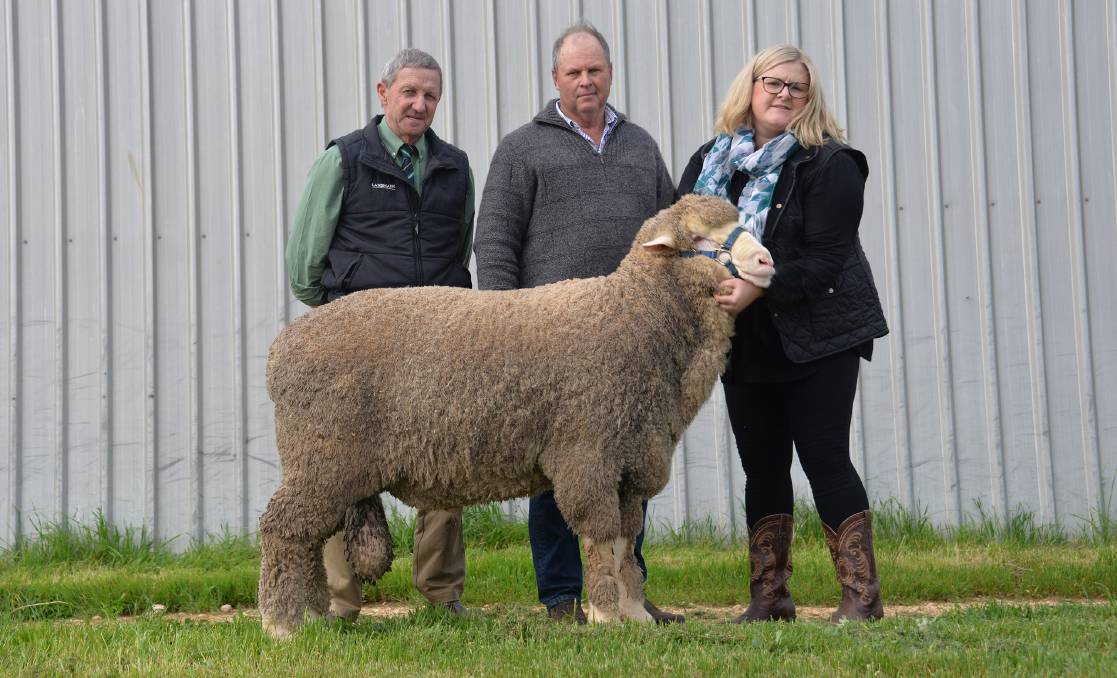 Overall, 45 buyers registered for the sale.

A mini auction was held of nine rams, where seven more cleared at $600 each, making the overall average $1974 for 201 rams sold by Colin and Julie Boughen and family.

He started with a successful $3200 bid for KP150 - a well-balanced, big-barrelled son of Old Ashrose 445, supported by strong Merino Select carcase traits.

It cut an impressive 11.48 kilograms for six months wool growth.

"This ram has a big barrel and quick growth, plus it is a positive wool cutter with rich and heavy-cutting wool," Mr Polkinghorne said.

Ashley and Kingsley Morrell, Bowhill, were pushed to that level to purchase KP941.

"We were looking for frame size, carcase traits with soft handling, bright and white wool and this ram had all that," Ashley said.

Ian Symonds, Why Gee Pastoral, Karoonda, is a long-term Kamora Park buyer, this year going to $5200 for four rams, averaging $3150.

Another buyer who travelled from Eyre Peninsula was DG&KJ Daniell, Coobowie, who bought three rams, averaging $3467. This included KP 772 - the junior and grand champion fine wool Poll Merino at the AS&WS - at $3800.

Clinton Blight, Seymour Park stud, Narrogin, WA, connected to the sale by phone via Elders, successfully bidding $4000 for KP870 - an 18.5M son of one of his own bred rams, SP23.

This sire was purchased by the Boughens for $25,000 and is one of three Seymour Park rams successfully used by Kamora Park in recent years.

Having by far the biggest impact on the sale clearance were the two biggest volume buyers.

He purchased 11 rams for the first time two years ago, increasing that to 21 rams last year and in a huge vote of confidence in what Kamora Park rams are doing in their breeding program, this year ramping that up to 41 rams.

Thirty nine came from the main auction, paying to $1600 and averaging $1056 to put a huge floor in the sale. They then added two from the mini auction at $600 each to bring their overall buying average down to $1034.

John and Paul Wegner, Wegner Bros, Karoonda, were as strong as ever in their long-term buying support.

Last year's biggest volume buyer Andrew Wall, Langidoon Station, was restricted this year by the poor season in Far West NSW, but still picked up 11 in the main auction and a further five in the mini auction, averaging $694.