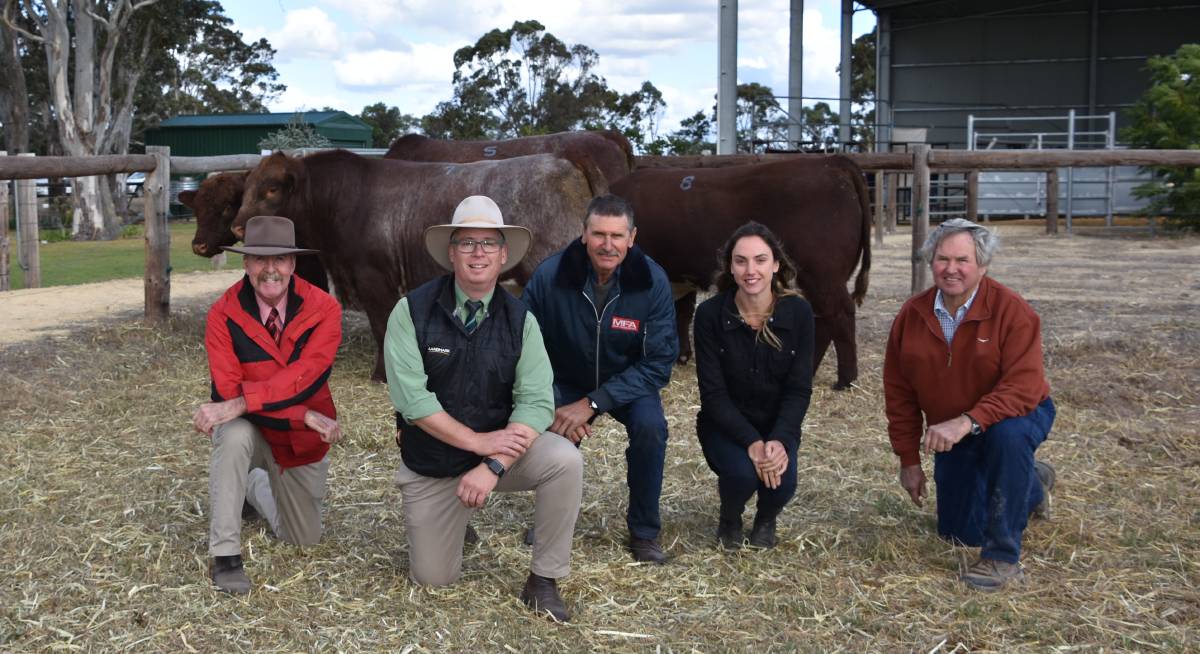 Belmore Quantum N132 ignited a bidding war at the Belmore Shorthorn sale at Naracoorte on Thursday, eventually selling to WA's Tara stud for $33,000 - making it the top price bull sold in SA this year.

Belmore Quantum N132 ignited a bidding war at the Belmore Shorthorn sale at Naracoorte on Thursday, eventually selling to a WA buyer for $33,000 - making it the top price bull sold in SA this year.

At +8, its milk estimated breeding value was in the top 5pc of the breed and, along with a +5.6 EMA figure, made Quantum N132 a very appealing sire.

Mr Bleechmore said the top price bull had a very good frame and structure, and "was a correct sire with depth of body and good muscle pattern."

His Tara stud has 50 registered Shorthorn females and he is looking to increase numbers further.

The Bleechmore family breed their own Shorthorn bulls for their Dalgety Downs station, located 1100 kilometres from their home property and 300km east of Carnarvon, WA. They run 1200 commercial Shorthorn cows and mate these to Charolais bulls and finish the progeny at Boyup Brook.

Interstate interest was not confined to the top bull, with buyers from five states - SA, WA, Qld, Tas and Vic - securing sires.

The top price bull would be the top of any breed with a lot of good to offer the industry. - GORDON WOOD

Wild Dog Creek is part of the Simpson Family Group of properties throughout the Fleurieu Peninsula. It runs predominately Shorthorn cows and sells to backgrounders and feedlotters at about 450kg liveweight.

Nick Simpson is passionate about the Shorthorn breed.

"They make great mothers with fantastic mothering instinct and do a great job on their calves, even in tough seasons," he said.

Mr Simpson said he would continue to support the Belmore sale with the genetics offered and the depth and quality throughout the catalogue.

Belmore principal Andy Withers said it was great to reach the highs of the sale, although they were missing major pastoral buyers - an outcome they had expected.

The sale was conducted by Landmark and Elders, with Landmark's Gordon Wood the auctioneer.

"The offering of industry-relevant bulls with shape, content and softness sold well under the current environment," Mr Wood said.

"The sale average of $6796 was very encouraging and buyers were able to be selective and secure their picks at their budget.

"The top price bull would be the top of any breed with a lot of good to offer the industry, being a very soft and deep bull with a great balanced phenotype."