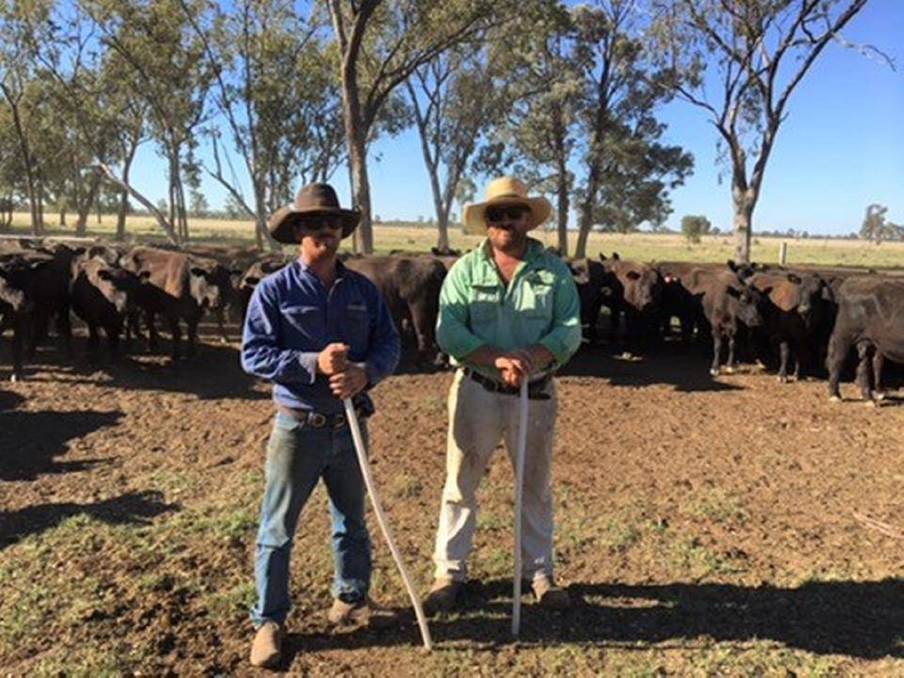 BROTHERS IN BUSINESS: Hamish and Lachie Cossart are taking on more of the Moonie, Queensland, cattle operations at the Dilbong property their father and mother Donald and Elizabeth Cossart established.

Donald Cossart will travel great distances across Australia for the right Angus bulls.

The successful operation of Donald Cossart’s Dilbong and McMillan Downs properties in Moonie, Queensland, centres on his acceptance that he will go pretty much anywhere, and to any great lengths and distances to get the right bulls.

​Mr Cossart says his plans for the future at his 6960-hectare Moonie pastoral property in Queensland’s Western Downs region begin with “easing off” a bit ... but that is not likely in the near future for the passionate Angus producer.

Not likely when his next comment is: “I would like to get back into the sheep industry’’.

Mr Cossart, a past Queensland branch president of the Angus Society of Australia and former Federal Council member, knows more than a thing or two about the industry and how to turn off quality Angus cattle.

He’s been doing it for 47 years and has a pure Angus herd of up to 3000 head on two properties in the Moonie district.

Cattle are supported with more than 809 hectares of cropping, including both winter and summer forage crops.

Mr Cossart also has had a number of years where he has leased property in order to build up numbers.

“It’s all cattle here now but was cattle and sheep until the dingoes cleaned us out in the past 10 years,’’ he says.

“Too much government intervention controlling where we could and couldn’t bait and tree clearing laws have added to the problem of development in Queensland.

“I would like to get back in to the sheep industry and lessen the cattle numbers.

“My boys, Lachlan, 31, and Hamish, 27, are taking more of a role in the management of the place now and my wife, Elizabeth, and I would like to ease off in the next couple of years.’’

Mr Cossart continues to coach his sons in the art of building great relationships with some of the best operators in the Angus business just as he has done.

So when we’re looking at bulls, we’re looking to produce progeny with low birth weight, high growth, structurally correct with good top line, depth of body and good width of hind quarter and all backed up with good temperament. - Donald Cossart

His praise of various stud masters, their honesty and integrity, coupled with outstanding knowledge of stock and performance traits required in the field show clearly that Mr Cossart is a person who invests in relationships for the benefit of his operations and the industry as a whole.

“Today, we try to breed cattle for the longer term feedlot market… selling our steer portion at the 400 to 500 kilogram range,’’ he said.

“So when we’re looking at bulls, we’re looking to produce progeny with low birth weight, high growth, structurally correct with good top line, depth of body and good width of hind quarter and all backed up with good temperament.

“I find the figures associated with the cattle helpful in selecting the above.

That would seem relatively straight forward but it is a quest which, since 1980 when Mr Cossart began buying bulls after the then extensive drought, has taken him across plenty of Australia to get just what he wants.

“I have bought bulls from Roseleigh Angus at Pinnaroo, South Australia, and I believe that Ron and Matt Cowley are producing some of the best seed stock that I have seen in the country so far.’’

But the success of the Dilbong and McMillan Downs venture doesn’t stop with going to great lengths – and distances – to get the right bulls.

“I’m not scared to go anywhere to get good bulls,’’ Mr Cossart said.

Pre-joining grazing programs, heavy culling of non-pregnant cows and spring calving are among the tools used on the property for the results Mr Cossart strives for.

“We spring calve because, in a normal season, you can expect early spring growth, which gives the calves a very good start,’’ he said.

“We are very keen on milk being on hand to get the calf up and running and calving in spring gives the best chance.’’

“If they don’t have a second calf, they are gone.’’

The cull heifers are sold to both feedlots and through the saleyards at weight of up to 400kg.

Dilbong retains 150 to 200 heifers each year, which are joined at a rate of 5 per cent.

“I have been dealing with a couple of private agents for a number of years and rely heavily on their advice with regards to my marketing program.’’

Weaners are taken off in May and June and worked through yards and tailed out to quieten them before, if season permits, going on the forage crops in a process covering about three weeks.

Mr Cossart said the continual development of infrastructure and the herd would enhance their breeding programs.

Completely re-fencing both properties in recent years has provided the opportunity to at some stage run single sire mating herds.

“At the moment we have multiple sire herds,’’ Mr Cossart said.

“We’re running about 30 bulls and I am happy with these breeders and bulls coming from genetics from all over Australia.”