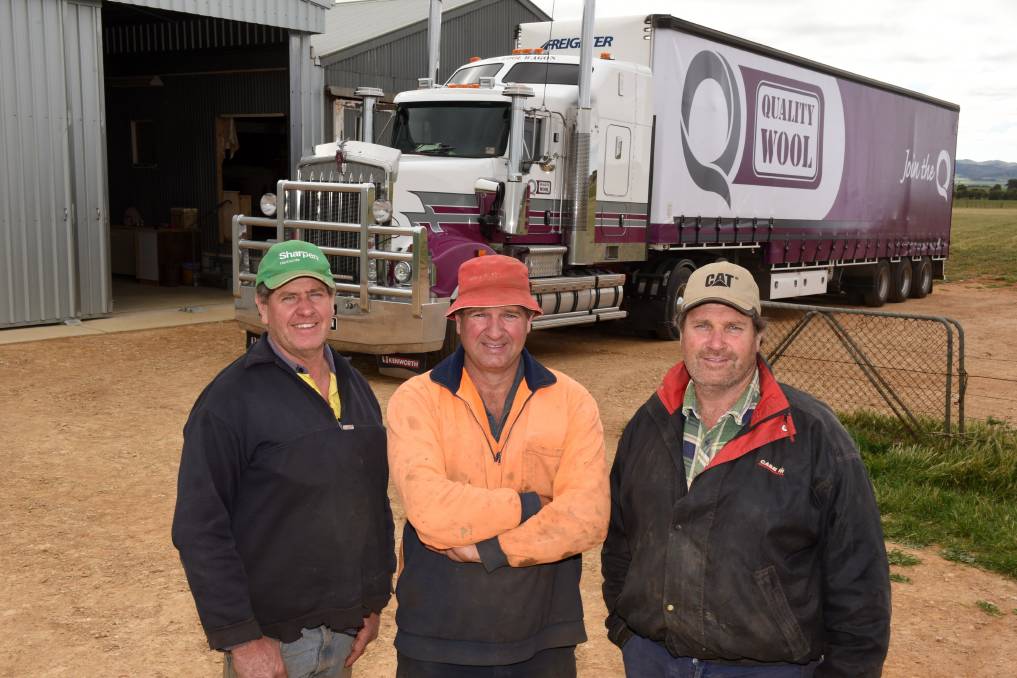 WITH a family history spanning back to 1875, the Clarks of Mannanarie, 20 kilometres north of Jamestown, have seen the wool market plummet and peak, and this year have benefited from strong prices in a tough season.

WITH a family history spanning back to 1875, the Clarks of Mannanarie, 20 kilometres north of Jamestown, have seen the wool market plummet and peak, and this year have benefited from strong prices in a tough season.

Dominic Clarke manages 1100 ewes with his brothers Martin and Jim, in conjunction with their cropping and hay enterprise across the 2400-hectare family farm in the Mid North.

Dominic said they had “always had a few sheep kicking around”, though numbers changed with the market.

The wool crash of the 1990s saw their stock numbers dip to 500, and then build up to the normal stocking capacity of about 1000.

The family runs 700 Merinos and 400 White Suffolk ewes, to capture both the meat and wool markets.

Dominic said White Suffolks were the “flavour in the region”, with their flock bred from various local sires that seemed to do better in a tougher environment compared with other breeds.

His Merino flock is also of local origins, bred from Broadoak, Whyte Yarcowie.

“We aim to produce a nice, white wool on a reasonably plain, big sheep – much like everyone does,” he said.

The family completed their annual shearing of all the breeders at the start of September and will look to shear lambs this week.

Dominic was happy with their wool yield given the tough season, sending off 51 bales.

“We’ll probably have another seven or eight bales of lambs’ wool on top of that. The big sheep did not yield a lot different to last year, but we did feed more grain to them, so it came at a bit more of a cost,” he said.

The return on their wool did improve though, with a jump from 1100 cents a kilogram to 1500c/kg.

“We might need some wool money to prop us up as the crops aren't going to do a lot this year by the look of it,” Dominic said.

We’re trying to get rid of numbers as quick as we can as we are going to run out of feed before autumn. - DOMINIC CLARK

Shearing produced an average fleece weight of six kilograms and the wool averaged 100 millimetres to 110mm in length, with a 21 micron to 22M fleece diameter.

Another change for the Clarks was their delivery method, as they were one of the first producers in SA to utilise Quality Wool’s new on-farm wool pick up service, which operates through the Mid North, Mallee and Upper South East.

The clip collection service began in August, with the Quality truck equipped to carry 112 bales.

Dominic was pleased to have the service available, though his wool cut may be less next year as the tough conditions cause him to de-stock.

“We’re trying to get rid of numbers as quick as we can as we are going to run out of feed before autumn,” he said.

WOOL is not the only way the Clark family, Mannanarie, have capitalised on the strong sheep market, with lambs sold earlier than usual due to the tough season.

While about 200 will remain as ewe replacements, Dominic Clark said as soon as lambs made trade weight, they had been sold over-the-hooks.

“Normally we would carry lambs to run through on our stubbles, but with the conditions, a third of our White Suffolks have already been sold,” Dominic said.

Even though we sold lambs early, we probably sold a couple hundred for $180 a head, which is pretty good money for something you’re trying to get rid of. - DOMINIC CLARK

“In a good year we would run them through to 24 kilograms to 28kg, but if you can get them to 20kg, there is good money so they’re out the door.”

Lambing occurs in May/June, timing that aids the Clarks with stubble management.

“It fits in as they can eat our stubble a bit more before we put them in the hills to lamb – though stubble hasn't been as big of a problem the last couple of years,” Dominic said.

Across his 1100 Merinos and White Suffolks, Dominic achieved a healthy lambing percentage of 105 per cent.

“Even though we sold lambs early, we probably sold a couple hundred for $180 a head, which is pretty good money for something you’re trying to get rid of,” he said.

While they have the relief of some spring pastures for feeding, Dominic said sheep were supplemented with oats, barley and lupins from March to August, and would have to be again if the rains did not arrive.