The biggest rain for the year in the Mallee on the eve of Kamora Park Poll Merino stud's annual ram sale helped lift the spirits of bidders but the average was still back $344 on 2017's sale. 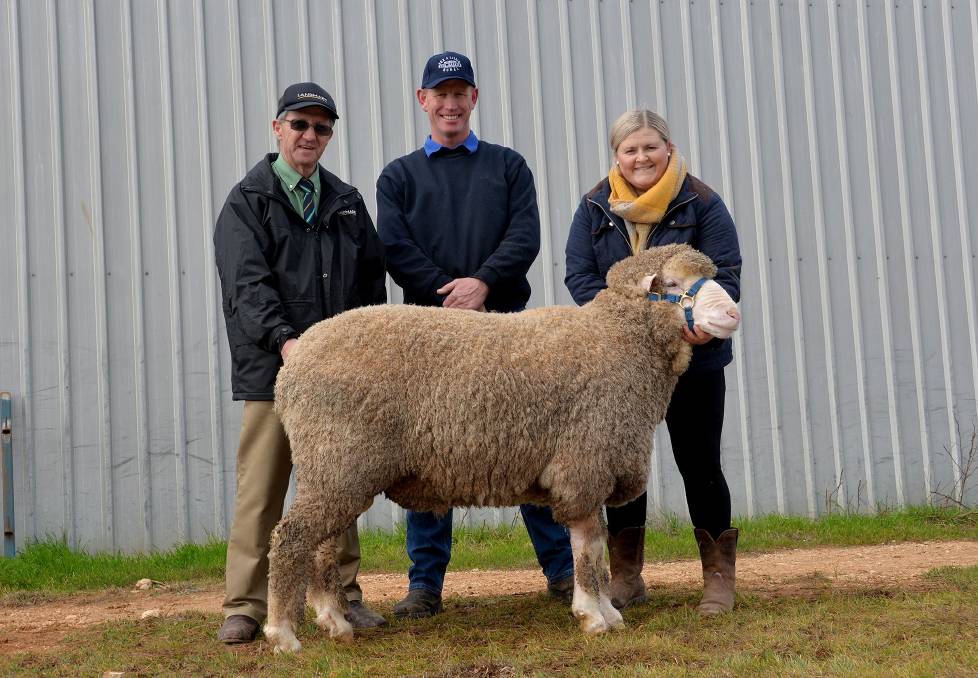 MUCH-needed rain on the eve of Kamora Park Poll Merino stud’s annual ram sale on Friday at Sandalwood helped brighten buyer optimism but the season that was turning from bad to atrocious still affected bidding.

Stud principals Colin, Julie, Wade and Katelyn Boughen enjoyed a 90 per cent clearance on their magnificent line-up of easy care, dual purpose rams, but their average was back $344 on last year’s very buoyant sale.

A positive for the Boughens was selling an extra 25 rams, plus another nine more soon after.

The Lot 5 ram, KP114, was aptly nicknamed ‘Horse’for its size and powerful presence.

The 18.7 micron son of Moorundie 363 had a Merino Select dual purpose index of 149, including a +19 clean fleece weight.

It cut an outstanding 8.72 kilograms of wool from seven months growth with fleece tests including a,2.3 standard deviation, 12.3pc coefficient of variation and 100pc comfort factor.

It was one of five rams Mr Dinham bought for a $3560 average.

“We retained all our grain from last year for our sheep, and the current wool and sheep markets certainly warrant the extra spend if necessary to get the rams that we think will keep improving our flock,” Mr Dinham said.

With a magnificent, long staple of bright, well-defined wool, this ram was the second heaviest cutter in the sale with 9.13kg at seven months, and a CFW EBV of +26.

The Blight family, Seymour Park stud, Narrogin, WA, bid via phone hook-up with Elders’ Tony Wetherall, with underbidders on the top two rams but then picked up KP 600, an impressive son of home-bred sire, KP333, for $2600.

Andy Beelitz Family Trust, buying through Landmark Lameroo, paid $4400 for KP467, the ram with the highest DP index in the catalogue at 159.

Their tally included Lot 3, KP1581 sired by Boonoke 948 which had the equal third highest Dual Purpose Index in the catalogue at 154.

Despite the seasonal hardships he secured 45 rams for a $669 average, plus another four passed in lots.

Stud principal Colin Boughen was both pleased and relieved to have 15mm, the biggest rain for the year and also have great support from their loyal clients.

Landmark conducted the sale with Gordon Wood and Richard Miller the auctioneers.