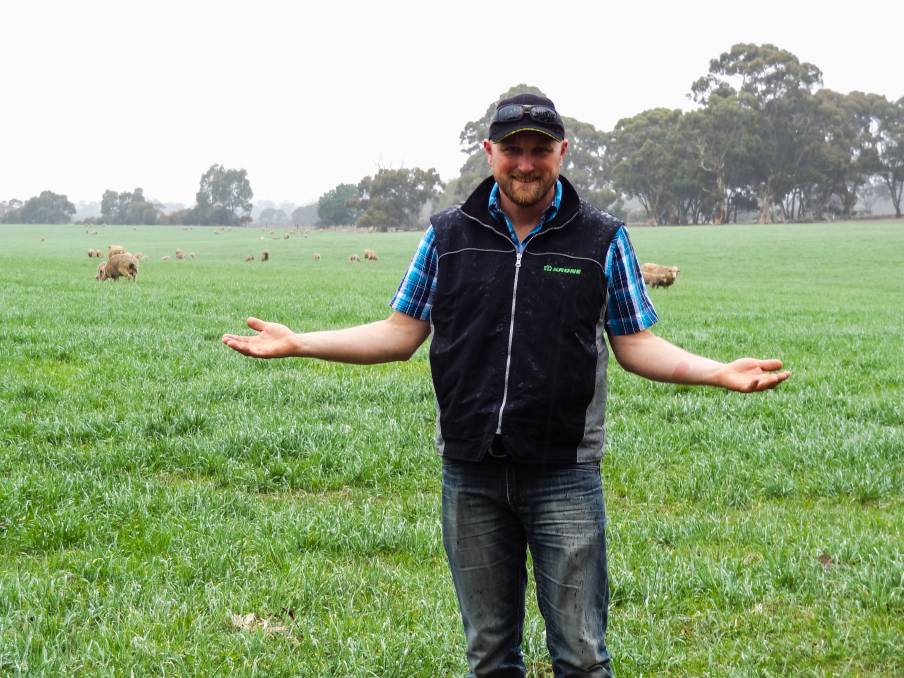 WELCOME BREAK: Travis Cooper, Martindale Farm, Mintaro, welcomes the rain on pastures that feed his Merinos, which are mated to White Suffolks and Merinos.

By pursuing a passion and maintaining a progressive sheep breeding program, Travis Cooper and his family, Martindale Farm, Mintaro, have had great success with their Merino flock.

In 2015, Mr Cooper took on the ‘apprentice farm manager’ role at Martindale Farm, owned and co-run by his in-laws Graeme and Dianne Johnson, with his wife Kara and their four children.

The 2200-hectare farm involves cropping and hay, but sheep are where Mr Cooper has found his passion.

“We’re pretty proactive in where we want to head with our sheep, always trying to improve and get better,” he said.

This is achieved by talking with other breeders, participating in lamb autopsy and ewe management courses through the Mid North Young Guns, employing worm egg testing to minimise drenching, using electronic tags, consulting with a microbiologist to get the most out of their pastures, and investing in top quality rams.

While the farm stocks White Suffolks and Border Leicester-Merino first-cross ewes to produce crossbred lambs, pure Merinos are the focus, with the aim to produce stud quality sheep on a commercial scale.

“We’re trying to get to a stage where we’ve got only class one Merinos with excellent wool and excellent frame,” he said.

“I guess we’re aiming for a 60 kilogram to 70kg ewe that is really fertile and has a lot of twins, with a nice length of wool of about 70 millimetres at six months minimum.”

This year, nearly 2000 ewes were joined, having run one ram to 32 ewes, and scanning numbers were good with less than one per cent dry.

“We mated 938 Merinos and crossbreds to White Suffolks, and 991 Merinos to Merinos,” Mr Cooper said.

The family has kept with a local bloodline, using Leahcim genetics across the Merinos and White Suffolks.

No one can complain with lambs at $8/kg and wool at $20/kg, so it's an amazing time to be in the industry at the moment and I think it's a good time to continue to breed a better sheep. - Travis Cooper

The other important facet is quality wool, and a change to six-monthly shearing is under way.

“We are aiming to shear in March and September at 70mm,” he said.

“We’ve got some beautiful wools and we’re getting longer in our wool to be able to go six-monthly, getting more bold crimp and definition, and getting nice and white fleeces, so we’re trying to stay around 19 microns.”

From weaning this year, Mr Cooper will be managing a fully non-mulesed flock.

“Last year we were getting really good yields and actually getting a premium for our non-mulesed wool,” he said.

“So we believe in the benefits of it and it’s just a management issue – where you buy your rams from, managing crutching at the right time – and we use electronic tags, so we scan and if they’ve had flystrike, they get culled.”

Lambs drop in May/June and by keeping the crossbred lambs well-fed, they were sold straight off the ewes at 2.5 to three months old, with a condition score of 3.5 to four, to a neighbour with a feedlot down the road.

Mr Cooper said they have not been exempt from the dry conditions, and the lack of a green pick has been quite tough on the ewes during lambing, but despite this, the state of the market is worth keeping sheep on.

“No one can complain with lambs at $8/kg and wool at $20/kg, so it's an amazing time to be in the industry at the moment and I think it's a good time to continue to breed a better sheep,” Mr Cooper said. 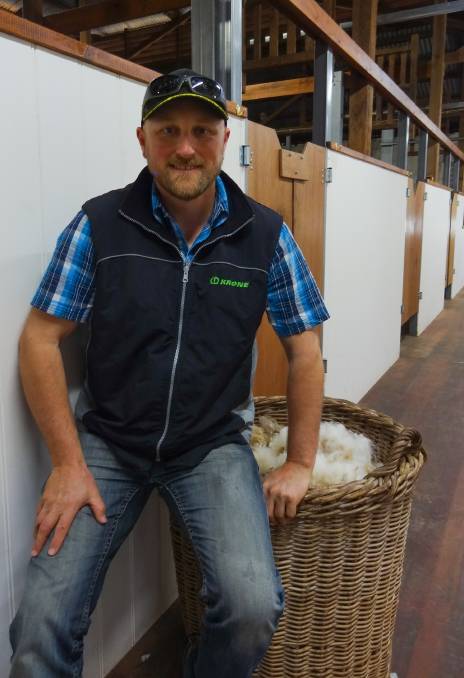 For Travis Cooper, Martindale Farm, Mintaro, quality of feed is central to his enterprise, having implemented cell grazing and individual supplement feeding.

“We give out sulphur, magnesium oxide, stock lime, a seaweed meal, and we put out some specifically made salt lick blocks just to give them a bit extra,” he said.

“We try to keep our ewes in such good nick that they all want twins, because whether they have twins or singles is to do with food on offer and condition of the ewe at the time,” Mr Cooper said.