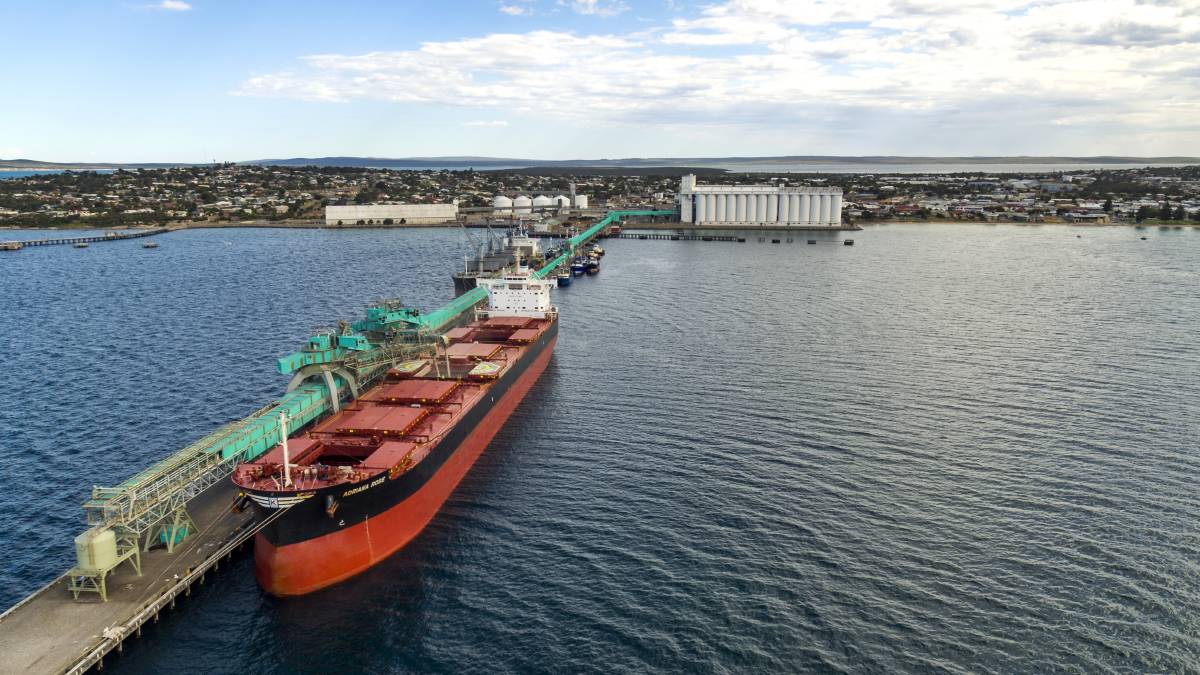 Viterra's Port Lincoln facility has just loaded the third largest shipment of grain on record in South Australia, but may soon face more competition if a proposed grain port at Cape Hardy, 100km to the north-east, gets off the ground.

A grower group has thrown its support behind a proposed port at Cape Hardy on South Australia's Eyre Peninsula.

AN EYRE Peninsula farmer co-operative has thrown its weight behind a port proposal linked to mining giant Iron Road.

Eyre Peninsula Cooperative Bulk Handling (EPCBH) has signed a Memorandum of Understanding (MoU) with Iron Road Limited regarding the development of a new grain export port at Cape Hardy near Tumby Bay.

The miner already has an MoU in place with Emerald Grain to support the proposal.

Iron Road received a mining lease and development approval for a $4.5- billion project in the middle of the Eyre Peninsula earlier in the year.

A grain port, should it get up, will compete against Viterra’s Port Lincoln facility and potentially against another proposed grain port at Lucky Bay,  110km to the north-east of Cape Hardy, championed by another EP-based grower group, Free Eyre.

The focus will now be on conducting a feasibility study into the viability of the facility as a grain port.

Mr Heddle said assistance through the Farm Co-operatives and Collectives Pilot Program (Farming Together) was being used by EPCBH to develop a project business case to fund a feasibility study.

He said it was the logical step forward for the project because “there is no point following just a dream.”

"The study is to clearly define the opportunity of the facility and put hard numbers around it, where the grain will come from, that sort of thing,” he said.

Previously, Emerald Grain had said it would look to get grain receivals from within road freight catchment zone, with a view to potentially take grain along the Warramboo rail corridor being proposed by Iron Road to move its iron ore.

Mr Heddle said the proposal still relied on the mining project going ahead.

“You look at the grain we are producing, it is not going to be enough to have someone jump in and build a state of the art deep sea port.”

“SA’s grain industry is relatively small compared with tonnage needed to make a port facility competitive and efficient, but with a mining facility that could turn out 10-15 million tonnes a year it is sufficient to make the model work,” he said.

“The grain would be a handy add-on for the port operators if it gets up and going, but this project needs the mine to get up and running if it is to go ahead.”

“It’s great to see another group on board, we’re obviously waiting for the project to get the official go-ahead but it is good to know the growers in the area are supportive,” he said.

Iron Road managing director Andrew Stocks also welcomed the partnership with EPCBH and said it demonstrated how his company’s Central Eyre Iron Project would benefit the broader region beyond the mining operations.

"We look forward to working with the cooperative and others to leverage the relative strengths of our industries and advance this project," Mr Stocks said.

Mr Heddle said his group felt there was a need for a new grain port facility to service the region, which has average grain production of between 2-2.5 million tonnes of grain.

He said the support of the Cape Hardy project was not a reflection of Viterra’s handling of the port at Port Lincoln.

“There is no ill will towards Viterra at all, they have handled some big harvests well through Port Lincoln, we just think a brand new, large, state of the art, deep sea port is what we need.

“Lincoln has served the industry well, but it is getting towards the end of its life, the vertical concrete silos are no longer the most efficient way of storing grain and perhaps a million tonnes of grain trucked through the main street of the region’s major town is not ideal.”

"At some point if the state is to remain competitive on the world stage, some investment needs to be made somewhere in terms of ports."

He said he was confident Cape Hardy could attract sufficient grain in spite of the established Port Lincoln facility just 100km to the south.

“We realise Port Lincoln won’t go away, but we think if get this up and running it will attract good support from the growers of the region.”

There was a demonstration the Port Lincoln facility is far from a spent force this week with the announcement the third largest grain shipment ever in South Australian history had just been loaded at Port Lincoln.

The shipment was put together by Viterra’s parent company Glencore Agricultural, and was comprised of 74,000 tonnes of wheat and barley.

The grain has been loaded onto the ‘Adriana Rose’, a Kamsarmax vessel 229 metres in length with seven holds.