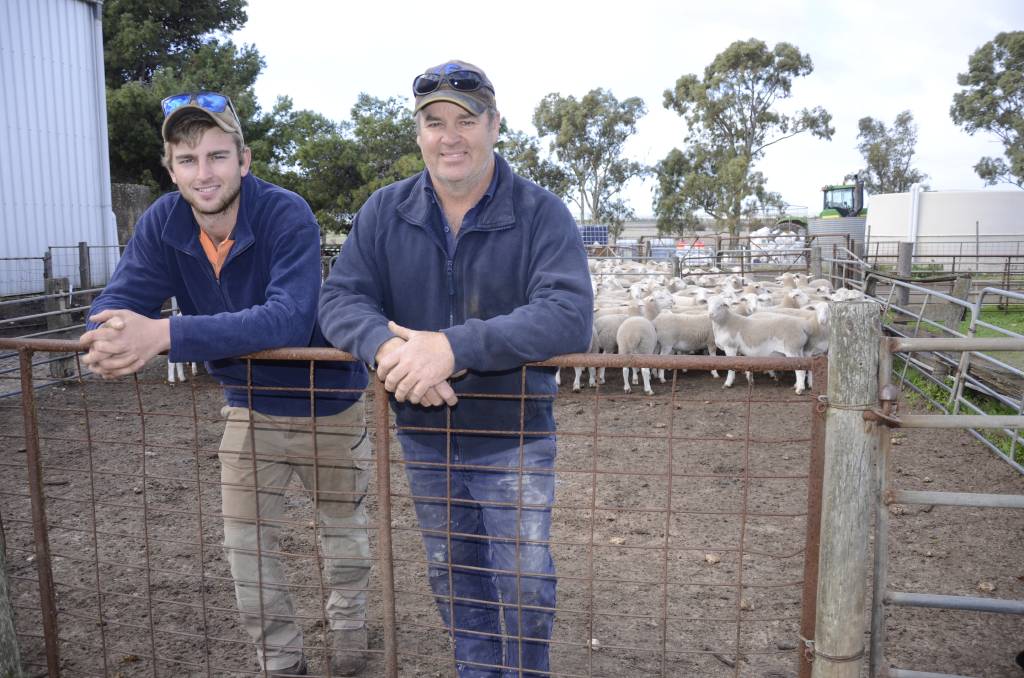 LESS HANDLING: Jack and Scott Crettenden, Karkoo, find White Dorper sheep do not require as much effort to manage compared with other sheep breeds they have previously run. Photos: PAULA THOMPSON.

No shearing, crutching or mulesing are attributes the Crettenden family like about Dorper sheep, which they switched to eight years ago.

Scott and Julie Crettenden and their son Jack, have never looked back since switching to Dorper sheep eight years ago.

On their property Tri-Kera, they run 2500 White Dorper ewes and 40 rams, and crop about 1200ha of wheat, barley, canola, peas, lupins and oats. The Crettendens previously ran Merinos, Suffolk-crosses and a Poll Hereford cattle stud.

Dorpers appealed to the family as they do not require shearing, crutching or mulesing, and have a quicker growth rate and turnover of lambs for sale compared with Merinos.

Ewes are mated every eight months with a ratio of one ram to 30 ewes. Rams are left in for five weeks to shorten the lambing period.

Conception rates are between 90 per cent and 95pc, and with three lambings in two years, lambing is 150-160pc across the two-year period.

The family is aiming to increase their lambing percentage to 180pc by culling the dry ewes at tailing and weaning.

Because rams do not have an extended break between joining, they are supplementary fed during this time with a lupin-based diet to keep up condition.

One month prior to lambing, ewes are injected with Eryvac and Glanvac B12. They are then put into smaller paddocks in smaller mobs two weeks before lambing.

Depending on conditions and time of year, the Crettendens have lick feeders and hay available for ewes to feed on. Mineral supplements are supplied to ewes during lambing.

Lambs may be put through a feedlot if not enough feed is available on-property. Lambs are sold between five and seven months of age, predominantly to Saltbush Livestock, Port Augusta.

Mr Crettenden aims to get his stock up to 45 kilograms liveweight before selling. This year, he averaged more than $150 a lamb.

Stock are being hand-fed on the Crettenden family’s Karkoo property as the dry start failed to get crops out of the ground.

Scott Crettenden said crops and pastures were growing at a slow rate, so he was supplementary feeding lupins, oats and hay to sheep, which he had never had to do in August before.

The Crettendens trashed in oats, vetch and canola as part of their pasture program this year. Weeds are taken out of pastures to promote clover and medic growth, with the hope of a hay cut later in the season.