HOT weather conditions didn’t deter buyers and onlookers from attending the first feature sale for the year at Strathalbyn on Friday. 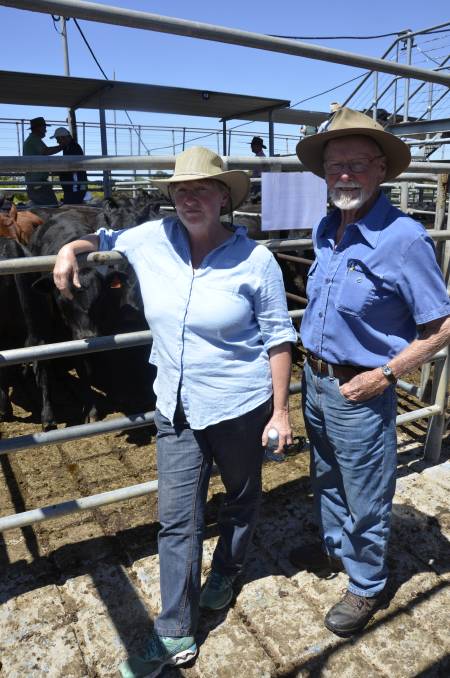 TOP WEANERS: Janet Furler and Richard Willing, Hindmarsh Tiers, sold 92 Pathfinder-blood Angus weaners on Friday, with the steers making to $1400 and heifers to $1240.

HOT weather conditions didn’t deter buyers and onlookers from attending the first feature sale for the year at Strathalbyn on Friday.

But the sale didn’t quite reach the lofty heights of the previous sale, according to Elders Strathalbyn branch manager Danny Reynolds, who said more ‘subdued’ buying was evident.

“Having said that, the sale was still solid, with the top steers hitting $1610,” he said.

“It was up to $50 on some lots, possibly due to varying reasons, such as purchasing for joining or trading, or even because of the different pen sizes,” he said.

While the highest kilogram price was $4.45 for 22 lighter Angus steers weighing 283kg from RW Young, Kingscote, which were bought by Bob Coulthard, Fernlea, Woodside, at $1260 a head.

Mr Coulthard said he normally bought steers at the first and second Strathalbyn market of the year, which he will background and then sell as 600-700kg bullocks at either Naracoorte or to the meatworks.

The 950-head yarding were mainly February/April-drops, from the local region, Fleurieu Peninsula and KI, with Angus the breed majority.

Buying support was strong from TFI and Princess Royal, alongside Adelaide Hills demand for steers.

“Some of the heifers were carrying too much fat cover, which resulted in subdued bidding on those pens.”

The next sale at Strathalbyn is on January 20, with 1100 weaners expected to be yarded.