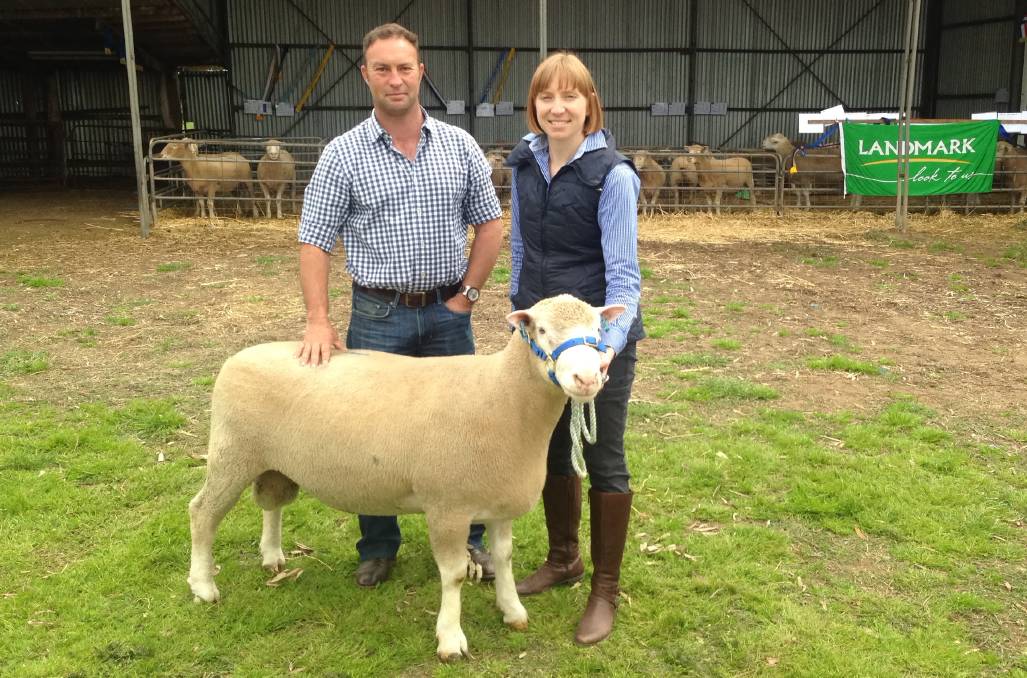 It weighed 130.5 kilograms with eight millimetres of fat and 52mm eye muscle depth.

The ram had come first in the lamb ram class at the Adelaide Show in 2015 and was part of the lamb production pair – export – that came third in Adelaide this year.

There were two second highest price Poll Dorsets at $3000 each, with one going to Strathdownie Estate, Vic, and the other to KJ Trowbridge, Ceduna.

The highest price paid for White Suffolk rams was $1600.

Paul Jones, Bengor Props, Melrose, bought one of the $1600 rams. Mr Jones’ family has been buying from the Newbold stud for decades.

The ram weighed 135kg and it had been part of the winning interbreed lamb production pair – trade – at the Adelaide Show this year.

Taking three rams at $1600, plus another at $1050, were father and son Chris and Mackenzie George, Argha Noa Pastoral, Mount Pleasant.

One of the sires was the champion ram at this year’s Gawler Show.

The George family bought rams from Newbold for the first time last year, taking home three Poll Dorsets. They had exceptional results with them.

Mackenzie said he went halves in a flock of 4.5-year-old Merino ewes that the rams were put over.

While the person who took the other half of the flock achieved a lambing percentage of 120 per cent, he got 140pc using Newbold genetics.

There was complete clearance of 55 White Suffolks, with an overall average of $1274.

Newbold’s Bill Close said there were many return clients and a few new faces.

“We’re very proud of the line-up this year,” he said.

“It’s really exciting to see that producers are prepared to invest in the future by buying really good genetics to maintain a superior lamb supply to the industry.”

The sale was conducted by Landmark and Elders, with Leo Redden and Tony Wetherall auctioneering.

“There was a very good line-up of Poll Dorset and White Suffolk rams again at Newbold,” Mr Wetherall said.

“They’re rams with very good figures and good growth. There was a very even, solid team of stud and commercial genetics available.

“Competition was strong on the top end of the Poll Dorsets, and the White Suffolks sold very well from the first pen to the last.”

Mr Redden said solid market value was achieved on the White Suffolks, while the Poll Dorsets represented value for money.