A FARMER'S daughter from Mallala has been using her skill with a paintbrush to help fundraise for a worthy cause. AMAZING: Andrea was diagnosed with breast cancer at 36, after losing her distant cousin at 27. PHOTO: El Simpson Photography

A farmer’s daughter from Mallala has been using her skill with a paintbrush to help fundraise for a worthy cause.

Body paint artist Wendy Fantasia, formerly of Mallala and residing in Kew, Vic, has spent the first half of the year painting 12 breast cancer survivors to produce a stunning calendar.

In addition to helping raise much-needed funds, the calendar aims to increase awareness of breast cancer in women under 40. The younger age bracket is less common and less readily diagnosed.

Ms Fantasia herself has witnessed breast cancer in her own family – her mum Judith, who still resides at the family farm – is a survivor after being diagnosed at 60.

Ms Fantasia said a body paint calendar had been on her “painting bucket list” for some time.

“I was thrilled to be involved with the calendar,” she said. “It is so exuberant and colourful, which is exactly what we wanted.” The calendar empowers each of the young women involved, sharing their individual stories, breast care facts and tips, and links to details about their personal battle in the hope of making younger women more aware.

With handfuls of ideas and sketches for each woman, Ms Fantasia said she focused on the individual’s differences and beauty, and sought to portray them as fighters.

“Once locations, models, photographers were finalised for each shoot day, rough designs were put together,” she said. “Final colour sketches were completed for each model the night before their shoots so imagery and ideas were fresh for each person.”

Ms Fantasia said being involved with the calendar had been the “most amazing experience”.

“I am beyond humbled, it has taught me so much,” she said.

Ms Fantasia said each painting session took almost an entire day, and they would photograph for two hours at the end of the day.

“They were very intense days,” she said. “But the result is just incredible.”

Professional photographers in each of the locations, which included the Blue Mountains, Parliament House, Sydney Harbour, Flinders Street Station, and many other iconic locations, volunteered their time for the project.

Rachelle Panitz, who organised the calendar, and said they hoped to expand into SA next year.

“We are putting money behind research to solve this riddle and get answers,” she said.

The 2017 ‘So Brave’ calendar’s proceeds will be going to the National Breast Cancer Foundation, which is the only national body that supports breast cancer research. 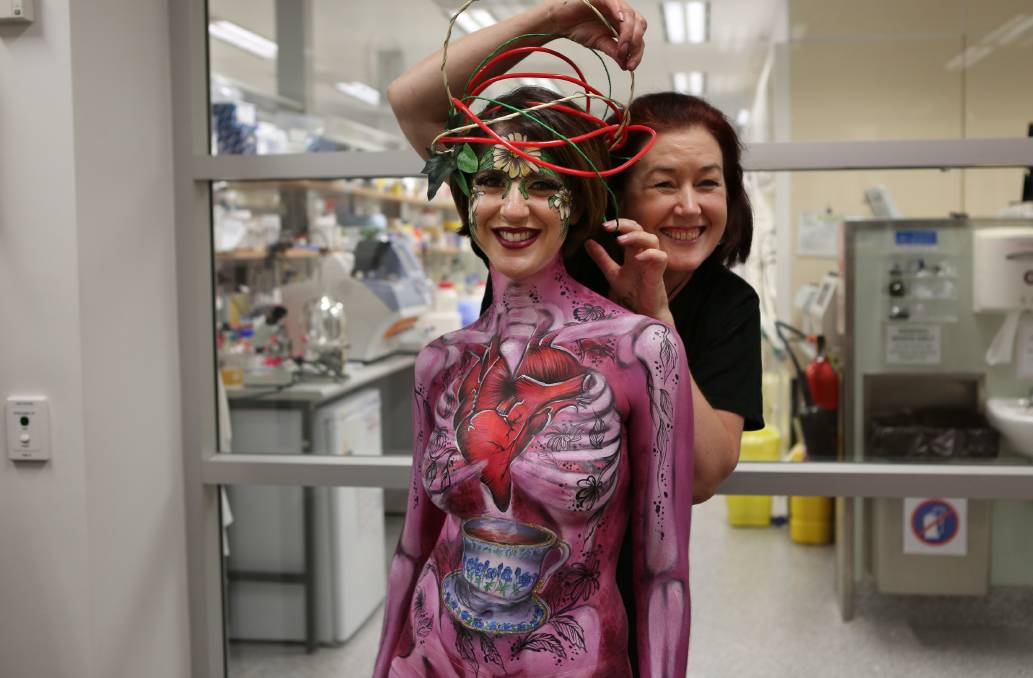 COURAGE: Natalie, pictured with Wendy, was diagnosed at 30 and then 33, when she was 30 weeks pregnant with her second daughter. PHOTO: Amy Higg Photography

It is estimated about 800 women under 40 will be diagnosed with breast cancer each year.

Next month will mark the Pink Ribbon Breakfast by the NBCF, and by hosting one, Australians will be helping to continue to fund world-class research and move closer to achieving their goal of zero deaths from breast cancer by 2030.

“By hosting a breakfast for the NBCF, you are ensuring that we can continue to fund the very best cancer research in Australia,” she said.

Sponsored by
OPPORTUNITIES for growth will be outlined at the GRDC Grains Research Update in Adelaide next month.
Test
The Lucindale community is still counting the cost of last week's Blackford blaze which tore through more than 14,000 hectares, but CFS incident controller Patrick Ross says the fire ground could have been three times larger if not for the Jacky White Drain, west of Lucindale.
Test
The new MLA funded survey reveals environment plays a big role when it comes to mulesing debate.
Test
PHOTOS of feral deer captured near Kimba by the Eyre Peninsula Landscape Board have raised concerns that deer populations are establishing on the eastern EP and that sightings are not being reported.
Test
Dr Steve Jefferies will oversee GPSA's operations, while CEO Caroline Rhodes runs for preselection as the Liberal candidate for Schubert.
Test
Six rural SA towns have been successful in received grants from the latest round of funding made available through the Foundation for Rural and Regional Renewal's Strengthening Rural Communities program.
Test
LIVESTOCK SA has hit back at an inflammatory statement from the Australian Workers Union - saying farmers can normally get away with paying below award rates to shearers because they bring in 500 workers each year from New Zealand - by calling on the AWU to work with the Australian wool industry, not against it.
Test
China's Kunteng Limited says no export commitment was formalised before it bought into Beston Global Food Company, where it now wants a board seat.
Test