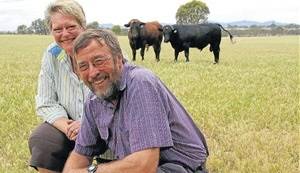 Leo and Liz Cummins are already on their way to reducing greenhouse gas emissions with twinning cattle and sheep.

Mr Cummins believed it was inevitable that livestock industries would eventually come under pressure to reduce methane output, largely coming from breeding herds or flocks.

“So far people have been talking about methane reduction by making sure every animal is productive," he said. “I’m just saying make them more productive and you will do even better.”

Mr Cummins has a high fecundity composite maternal lamb-producing flock with the Booroola gene. At a scanned pregnancy rate of 197 per cent, the ewes would wean 153pc of lambs with a ewe mortality rate of 5pc.

“Using the FarmGAS model this results in 133 kilograms of CO2 equivalent per lamb weaned," he said.

He said a normal flock with a scanned pregnancy rate of 144 per cent, weaning rate of 124pc a ewe mortality of 3pc would produce 158kg of CO2 equivalent per weaner.

Mr Cummins and his wife Liz have been importing US Meat Animal Research Centre twinner genetics since 2004. In the latest calving season their herd had nine sets of twins from 32 cows and heifers with twinner blood; a 28pc twinner rate.

At a conception rate of 138pc and a calf weaning rate of 127pc, with cow mortality at 3pc, a twinner herd would produce 1.6 tonnes of CO2 equivalent/calf weaned, he said.

“My estimate is the twinner herd will be producing 30pc less greenhouse gas/calf weaned,” he said.

“These examples clearly show that high fecundity livestock will substantially reduce the methane emissions of our breeding flocks and herds.”

Mr Cummins said his twinner herd had been weaning single calves at 370kg and twins at 300kg or 600kg/cow. Typical weaning weights in the Booroola composite flock in recent years have been singles at 40kg, twins at 36kg and triplets at 32kg.