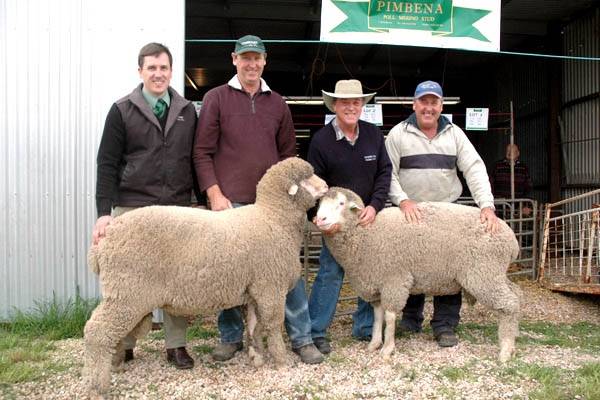 PIMBENA Poll Merino stud at Wirrulla on Eyre Peninsula reached a $2000 ram high and a healthy average of $992 at its on-property sale last Thursday.

PIMBENA Poll Merino stud at Wirrulla on Eyre Peninsula reached a $2000 ram high and a healthy average of $992 at its on-property sale last Thursday.

While prices were back on last year, it was a good solid sale representing value for money on affordable rams bred on the West Coast to cater for local demand.

Crowd numbers were up, pointing to the stud's growing reputation, and studmaster Les Hamence was praised for the significant work he had put into the Pimbena bloodline.

Landmark Ceduna’s Bruce Wood said it was very pleasing to see a loyal band of buyers.

"Buyers were able to bid up with confidence due to timely rains helping the season along and confidence in the Merino industry backing positive wool and meat returns," he said.

Mr Hamence said the offering increased in line with the number of quality rams produced, which helped keep the price down and provide value for money for local buyers.

Next year rams will be offered from the stud's AI program from Calcookara ram Leachim 858, to which Pimbena has semen rights, and Glenlea Park sire 004. "The progeny of these top sires are already up to 40kg at four months," he said.

At the end of the sale clients were treated to fine West Coast hospitality and enjoyed a range of smoked fish, a barbecue and plenty of cold beer.