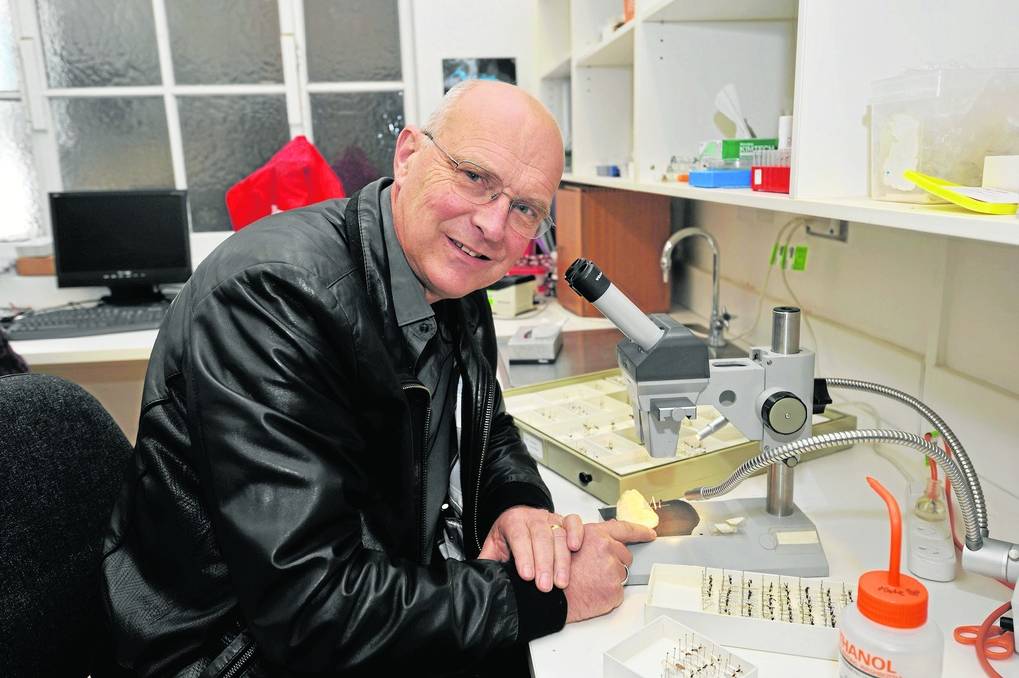 BUG LAB: The University of Adelaide’s Prof Andrew Austin takes a close look at a selection of tiny wasps.

WHEN Australians refer to wasps, they are likely to speak of pests that hover around barbecues, or a nest of unwanted insects with painful bites in a garage alcove.

WHEN Australians refer to wasps, they are likely to speak of pests that hover around barbecues, or a nest of unwanted insects with painful bites in a garage alcove.

Few people would think of an invertebrate with a 'smiling' face that offers benefits to agriculture.

But that is precisely what University of Adelaide researchers propose after the discovery of new species of native parasitic wasps.

The group, from the genus Phanerotomella, have been identified as being from the same family of wasps introduced into Australia to fight the likes of potato tuber moth.

"The fact that each wasp species targets only one specific moth means that they are potentially ideal candidates for development as biological control agents of agricultural pests," Ms Kittel said.

"It's important, however, that these wasps are properly identified and described so that agricultural researchers can work with known species."

The adults inject their eggs into the eggs of host moths. The wasp larvae then feeds on and develops inside the developing moth caterpillars and they emerge as the caterpillar dies.

The wasp larvae then form a cocoon until the climate conditions are right for the adult to emerge and start the cycle over again.

Project supervisor Prof Andrew Austin at the University's Australian Centre for Evolutionary Biology and Biodiversity, says there are two types of biological control.

One tackles pests brought into Australia, the other tackles a pest that is native but has moved into agricultural systems.

"The classic example of the first type is prickly pear," Prof Austin said. "Cacti don't naturally occur in Australia and when prickly pear was introduced it caused huge problems and grew uncontrollably over grazing land in NSW and Qld."

Studies were undertaken on the continent the pear came from, South America, where a moth was found to specifically feed on the pear. It was brought back to Australia and eventually released into the wild where it "devastated" the stands of prickly pear.

"It suppresses it to levels where it is not causing ecological damage. But it's virtually impossible to eradicate a pest altogether because one can never find every one plant or pest."

The second form of biological control is called augmented control, which Ms Kittel is proposing for the native chelonine wasps.

Examples of a native pest that has built up and moved into agricultural systems include the heliothis moth, which has affected cotton crops, and light brown apple moth, a pest on "a huge range of crops".

"What we're doing is looking at new parasitoid species and seeing if they are associated with native pests.

"Finding information to identify them involves sequencing their DNA as a fingerprint to recognise them in the future.

So far, one wasp parasitoid has been found to attack quandong moth, and has potential as a control agent.