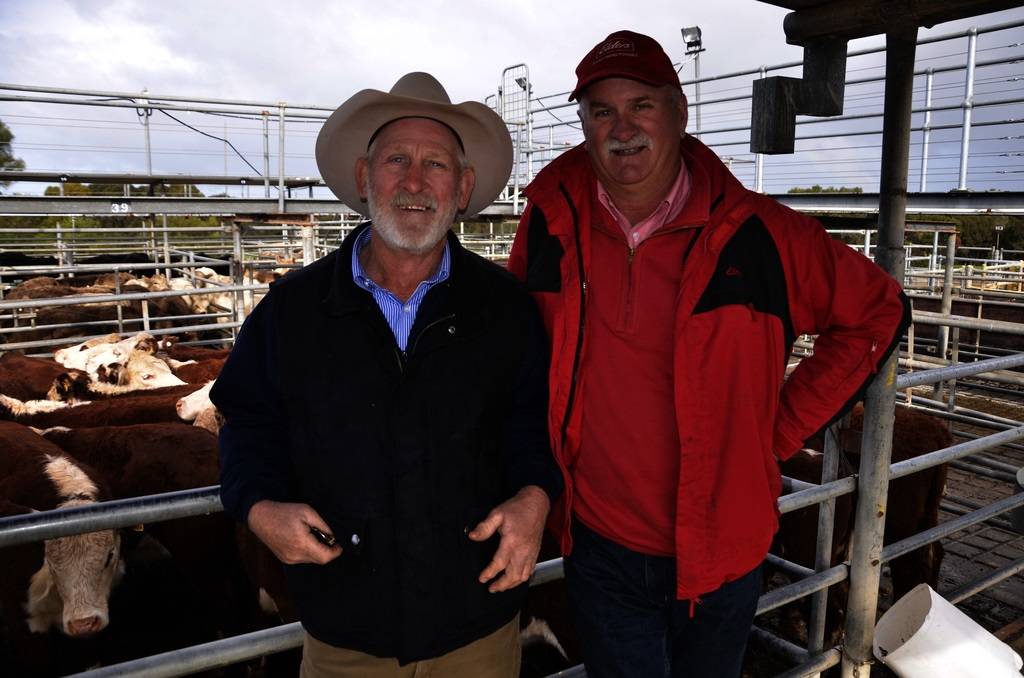 BIG FIELD: Curnamona Station manager Jeff Pumpa, north of Yunta, and Elders Peterborough manager Tim Taplin in front of some of the 120 cattle fielded by the station at the Strathalbyn saleyards on Friday last week.

IT WAS a wet and wintry day at the Strathalbyn Feature Cattle Sale on Friday last week but prices were up on the previous sale in May.

IT WAS a wet and wintry day at the Strathalbyn Feature Cattle Sale on Friday last week but prices were up on the previous sale in May.

In light rain, Elders and Landmark cleared all 500 cattle, including 120 weaners offered by Curnamona Station, north of Yunta.

Elders Peterborough manager Tim Taplin said the best of Curnamona's Poll Hereford steers sold for $590, equating to about $1.85 a kilogram for a pen of 16.

"The dearest ones per kilo were the small calves," he said.

Mr Taplin said it was part of Curnamona Station's annual sell-off and there would be more to come.

But it was Angus steers that started the sale off on a solid note, beginning with two pens from Mills Farming, Kangaroo Island.

Heifer prices were up on the last sale at Strathalbyn, with Mills Farming fielding a pen of nine Angus heifers at $650 and another pen of 9 at $635.

Mr Reynolds said a large run of "quality" Poll Hereford heifers offered by Curnamona ranged between $364 and $415, while its heifer calves sold from $300-$330.

The story Angus steers in demand at Strath first appeared on Farm Online.