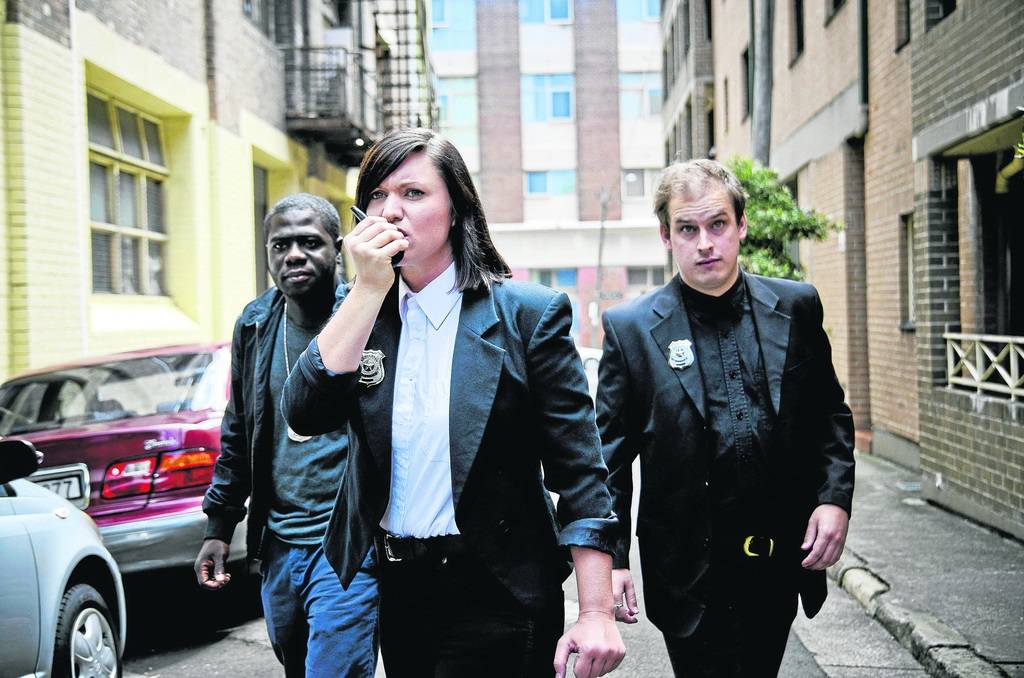 ON PATROL:Team MESS actors Frank Mainoo, Natalie Randall, and Malcolm Whittaker get into action for a scene from Bingo Unit, a television drama that sets the stage for locals to play their part in creating the narrative. Photo: Lucy Parakhina.

IF you are walking through the streets of Renmark or Mount Gambier this month and stumble on incidents that seem to have come straight off a television crime series, you are probably right.

IF you are walking through the streets of Renmark or Mount Gambier this month and stumble on incidents that seem to have come straight off a television crime series, you are probably right.

The two towns will provide background for the filming of Bingo Unit, an interactive 'multi-media drama experience' by Sydney-based performance and visual arts group, Team MESS. It prides itself on reproducing people's interpretations of crime drama.

Team MESS actor Malcolm Whittaker said locals would be invited to put on a jacket, a badge, a gun and holster, and play their part in creating the show's narrative for the cameras.

Participants would be placed in clich((xE9))é situations in their respective towns, such as being on a stakeout as a suspect arrives, or informing an unfortunate mother that her daughter is dead, before being asked to react to what happens next - without a script.

"We're so over-saturated with these sorts of shows on prime-time television," Malcolm said.

"People know them so well so we figured that we could just shoot a couple of these scenes and give people little or no direction to speak of and they would just know what to do."

Participants would be told the scene's set-up as they arrived on location, but how the scene played out would be a surprise.

Individuals or groups would be filmed in up to 20 takes a day - each recording their own unique take on a situation.

"Every take that we do takes about 10 minutes, but each scene ends up going for about a minute," Malcolm said.

"And in a Team MESS show, every performance is a stellar performance."

The scenes would then be presented at public performances at the Chaffey Theatre, Renmark, and the Helpmann Theatre, Mount Gambier.

It would be produced in a Warner Brothers 'back-lot' style, where people would be able to view the scenes on a number of screens.

The rest of the story would be performed and filmed on the same night, pulling all the different scenes together into a complete story.

"We will use the public as participants in the same fashion as the outside scenes, but we'll do it live in front of the screens so it's more like a theatre show," Malcolm said.

"People will wander around the theatre and there will be installations where you can watch all of the material.

"Throughout that, we'll shoot some of the scenes that we still need to do to make a whole episode.

"There'll be a courtroom scene, and a jury deliberation scene, kicking in the door scene - all that sort of stuff."

The story Locals get a piece of TV action first appeared on Farm Online.