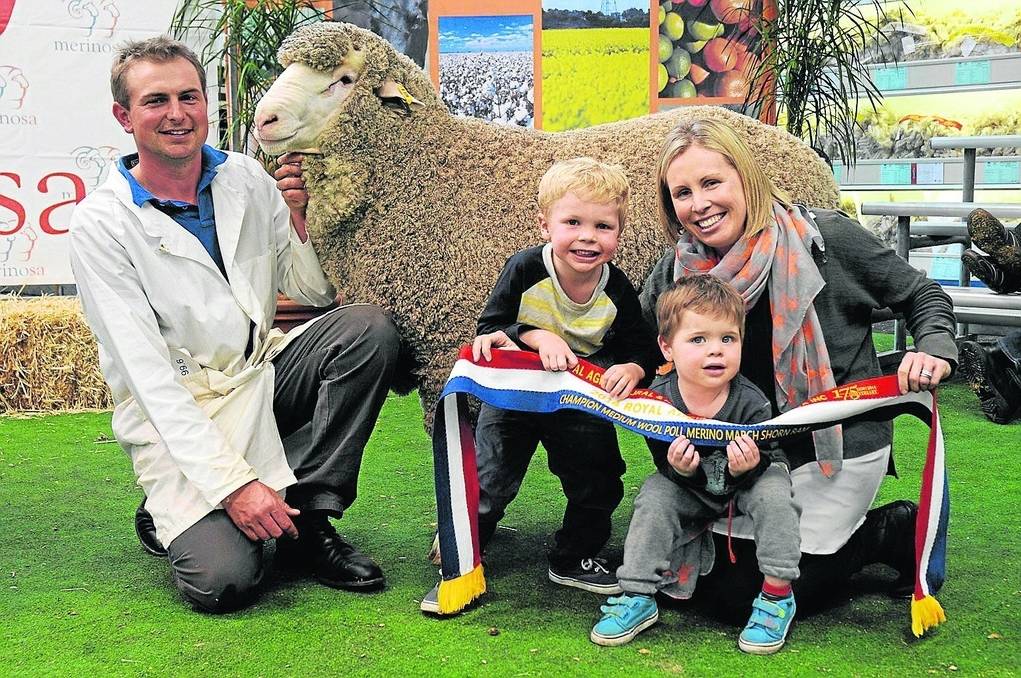 The 19.5-micron sire - B306 - with wool measuring a standard deviation of 3.2, coefficient of variation of 16.4 and comfort factor of 99.6 per cent won the under 1.5-year-old class from 38 entries for his wool-cutting potential and balance.

Mr Ledwith, Kolindale stud, Dudinin, WA continued to heap praise on the 127-kilogram winner, bred and shown by Tom and Laura Davidson, and commended SA breeders on their breeding programs of dual-purpose animals with good, meaty sheep with plenty of good wool.

"The champion ram is basically faultless. He is big, has a big spring of rib with a real good wool on him, good bone, and is good on his feet," he said.

It gave Moorundie Park their second grand champion ram win in a row.

"He is a real picture of a ram with real presence and stands big and square," Tom said.

The following day the ram won the Fibre Meat Plus class with scans showing a 43 millimetres eye muscle depth and 7mm fat depth.

He sold in the Adelaide ram sale on Friday for $53,000 to Kerin Poll stud, Yeoval, NSW.

"He is a big, upstanding ram with a real strong masculine head and is going to cut a lot of good nourished wool," Mr Ledwith said.

P604 - known as Prince Harrison - is one of Radnor's stud sires and has 160 lambs on the ground which they are rapt with.

The massive ram was sold before the show to WA studs Manunda, Tammin, and Rangeview Poll Merino stud, Darkan, for $25,000 in a private sale.

They had seen the ram at the SE Merino Field Days on their way home from the Australian Sheep & Wool Show at Bendigo, Vic.

"The reserve has cracking wool and beautiful nourishment but I couldn't go past the champion for his sirey outlook," the judge said.

"It was a superb class of strong wool rams but I have gone for the champion for his overall balance and woolgrowing capabilities with a really free, productive skin."

The ewe - a daughter of Wallaloo Park Real Deal - was the champion March-shorn ewe at Hay Sheep & Wool Show in NSW.