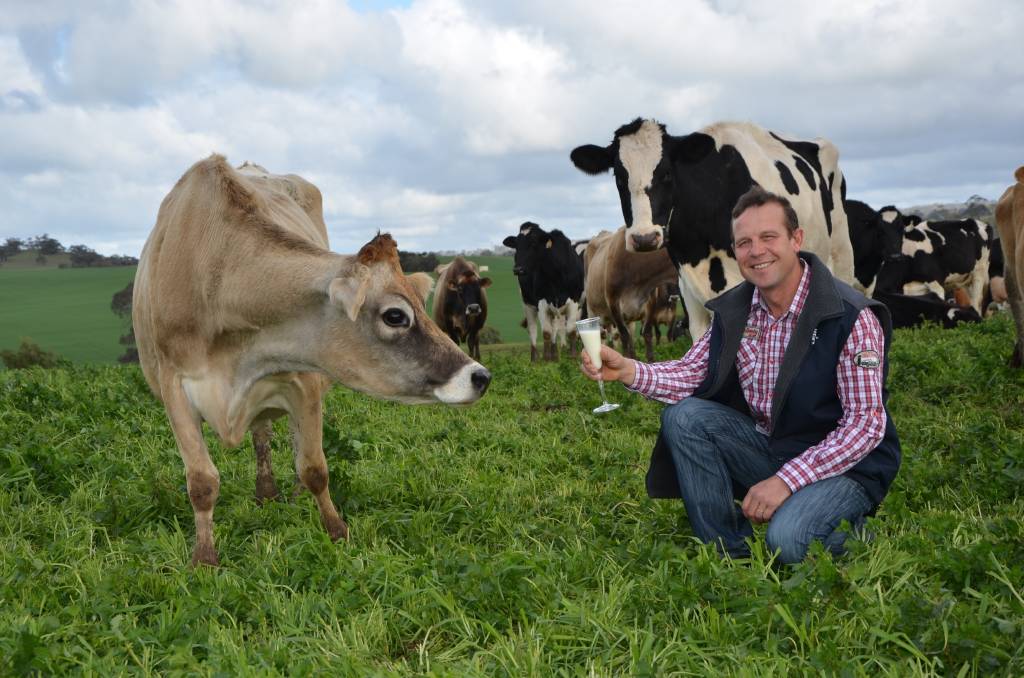 Moculta dairyfarmer Andrew Koch is one of six Barossa Valley and Mid North producers supplying milk direct to Woolworths for the Farmers' Own brand.

THE Barossa Valley is generally known for its reds, but a new white variety will soon make a splash - Farmers' Own milk.

THE Barossa Valley is generally known for its reds, but a new white variety will soon make a splash - Farmers' Own milk.

From today, the Barossa-sourced milk brand will be available in Woolworths stores throughout SA and NT.

Six dairy farms across the Barossa and Mid North will supply milk to the Farmers' Own brand.

Dairyfarmer Andrew Koch, Moculta, said it had been a long process to get local milk on the shelves, but he was excited to see the final product.

Mr Koch said the brand's origins stretched back to the "milk war" days - when supermarkets began selling milk for $1 a litre - and the subsequent March 4 Milk in 2013.

He said detailed discussions began in mid-2014, when the Mid North Cooperative board met with representatives of the supermarket.

Six of the original 15 farmers in the co-op will be involved in the final deal, contracted to supply 5 million litres a year, with plans to expand the brand in the future.

The company began trialling the brand in October 2013, and later rolled it out in WA with Margaret River milk, Vic with milk from the Otway region in the state's south-west, and southern Qld.

"We've been able to follow them and hear about their experience," he said.

"We've been encouraged that their brand has grown really well."

He said NSW sales of the brand had almost doubled in two years. After starting from a supply base of 6mL, local dairyfarmers had stepped up to supply 11.2mL.

To make the brand possible, the Australian Competition and Consumer Commission had to grant an exemption to allow the dairyfarmers to negotiate directly with a supermarket, rather than through the traditional processor model.

"The Barossa is renowned for food, the wine is a highlight, but the food quality is high as well," Mr Shearer said.

In 2014, the brand won a gold medal at the Royal Melbourne Fine Food Awards, as well as bronze and silver medals at the 2015 Royal Qld Food and Wine Show.

He said sales indications from WA, Vic, NSW and Qld suggested consumers were looking for a premium product.

"The longer it spends on the market, the more it grows," he said.

The brand includes three milk products - non-homogenised, low fat and full cream, with the latter having 4 per cent fat and 3.2pc protein.

Mr Shearer said the company was also considering introducing other dairy products to the line.

"We want to continue to work with farmers," he said.

Mr Koch said the emphasis on quality applied all the way through the process, with higher standards - such as a lower cell count parameter - in place.

The milk is picked up on-farm daily and processed at the Parmalat site at Clarence Gardens in Adelaide.

Mr Shearer said the milk was kept separate throughout the process.

"It's all kept in SA and managed by South Australians," he said.

Mr Koch said farmers were excited about closing the gap between milk producers and consumers.

"The six farms are really looking forward to knowing where their milk is going to be sold," he said.

"Because of milk swaps over time, they might be supplying one company but don't know where it ends up."

"Obviously we struck a deal financially better than the existing model or else no one would do it," he said.

"The biggest bonus is it has attempted to take the volatility out of the milk price."

He said the three-year rolling contract had given the farmers confidence.

"We can go to the bank and build, and have the confidence to do so," he said.